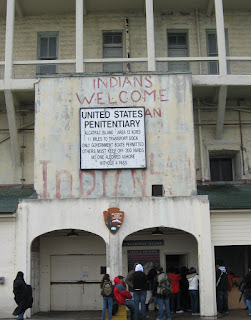 Click to listen (or download)
Article and photos by Brenda Norrell/Censored News
http://www.bsnorrell.blogspot.com
SAN FRANCISCO -- Thousands of people gathered on Alcatraz Island to remember those who occupied the island in 1969 in a stand of resistance for Native American rights.
Before first light, the ceremony began with Pomo traditional dancers. Maori are among those honoring the traditions and culture of their peoples.
Before sunrise, live on KPFA Radio, Wounded Knee spoke of the Shellmound Walk and the need to protect the Shellmounds. Radley Davis offered a traditional song, with Doug Duncan and the Pomo Dancers. With more than 4,000 people gathered, children and family members of those who occupied Alcatraz shared memories.
Fred Short spoke on honoring the traditions and recognizing the warriors who stood up against the oppression of the government.
Clyde Bellecourt said at the time Alcatraz was occupied, in the late '60s and early '70s, nothing was being done to uplift the conditions of American Indian people. Speaking of the US colonizers, Bellecourt said this is the day of "Thanks-taking" for European immigrants to the US. 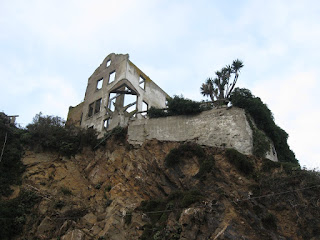 "We're not minorities, we are sovereign nations," Bellecourt said.

Host Mary Jean Robertson pointed out that some of the first prisoners at Alcatraz were Hopi who refused to send their children to boarding schools. She also asked for everyone to call President Obama and urge for the release of Leonard Peltier.
Bellecourt reminded people that the time has come, as he said earlier, to "hold Obama's feet to the fire," and demand the release of Leonard Peltier and for the US to adopt the Declaration on the Rights of Indigenous Peoples.
The United States is the last country in the world to adopt or endorse the Declaration, already adopted by the United Nations.
Tony Gonzales, AIM West, spoke of the rallies planned for the UN Climate Summit in Cancun, Nov. 29--Dec. 10, 2010.
Gonzales said that the AIM West Conference on Friday, at the Baha'i Center, will focus on climate change and the upcoming UN Climate Summit in Cancun. The Indigenous Environmental Network, with executive director Tom Goldtooth, will be in Cancun with a delegation. Gonzales said a concert concludes this week's AIM West Conference on Friday night: http://www.aimwest.info
Speaking with a guest from Vietnam, Mary Jean Robertson, said she hopes the US government will do something about the Agent Orange dropped on the Vietnamese people.
Ann Marie Sayers, Ohlone, spoke of the morning sky and wished everyone a safe journey home. "Honoring the ancestors is a reason to live," Sayers said.
Radio hosts Mary Jean Robertson of KPFA's Bay Native Circle with KPFA's Miguel Molina and Tony Gonzales of AIM West, along with other radio hosts.
Posted by Censored News, publisher Brenda Norrell at November 25, 2010