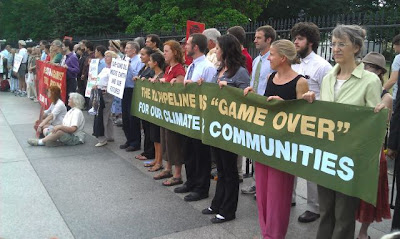 Day 6 White House Tar Sands Protest Going Strong! Photo by Joshua Kahn Russell. Thank you from Censored News! On Day 5, the total was 275 arrests to stop the Keystone XL Pipeline from Canada to Texas, and the environmental disaster of the tar sands in Alberta, Canada.


Listen to Cherri Foytlin, a mother from the Gulf Coast, arrested on Day 5.

Park Police: We don't want to arrest more than 10 people a day
http://www.tarsandsaction.org
Posted at Censored News
News — admin @ 10:01 am
On August 18th members of the legal team and action coordinators met with leadership of the Park Police to discuss the upcoming Tar Sands Action. At that meeting the Park Police leadership told us that they didn’t want to arrest more than 10 people per day.
We explained that while we provide support for the Tar Sands Action we don’t dictate to the people who participate, and that although we understand their position, they should prepare for between 40 – 100 people to risk arrest each day. We also explained that the target of the action is the Keystone Pipeline and not the Park Police.
On Day One the Park Police arrested 66 people for Failure to Obey, a traffic charge. In a deliberate move they held Day One arrestees until Monday (in DC, court is not in session on Sundays). The Park Police stated that their intention was to deter other people from participating in the action. After spending two nights in jail, Day One arrestees were ‘no papered’ which means that they didn’t pay a fine and no charges were brought against them.
On Day Two, the Park Police arrested 42 people, and everything changed. Realizing that they had failed to undermine the resolve of participants, the Park Police offered Day Two arrestees Post and Forfeit (see Legal Memo FAQ) and processed and released them within hours of their arrest.
From the second day on, the Park Police have speedily processed arrestees and offered them Post and Forfeit for a Failure to Obey charge. This is our expectation for the coming days of the action, but there are no guarantees for the future legal process.

Members of the No Tar Sands Caravan and Stop The Pipeline Tour converse with locals and the media in Lincoln, NB.
ST. LOUIS, Missouri, August 25th, 2011 – With 2,300 miles and eight states traversed, the No Tar Sands Caravan arrived in St. Louis at midnight on its 4th day of travel headed for D.C. from California. The day featured a lively press conference in Lincoln, Nebraska, an engaging mini-action at a Kansas City gas station, and a 614-mile drive from Lincoln to St. Louis. After adding two cars in Lincoln, the caravan has swelled to four cars (two hybrid) and a dozen riders planning to arrive in Washington D.C. on Saturday with even more company.
Over fifty concerned citizens gathered for a press conference at Cultiva’s Café in Lincoln for a meeting of two caravans on their way through America to take action in Washington D.C. The event was organized by Bold Nebraska, a politically mixed grass roots organization who’ve had several members arrested at the White House on August 22nd participating in the Tar Sands Action. The meeting brought the Stop the Pipeline tour together with the No Tar Sands Caravan.
The Stop the Pipeline caravan is carrying five land owners galvanized in opposition to the Keystone XL Pipeline that, if approved by Obama, would cross their lands and threaten their crops, wells, and families. The Stop the Pipeline caravan is following the length of the proposed Keystone XL Pipeline before heading into Washington on August 30 to stand in solidarity with everyone who has risked arrest in the two-week long act of civil disobedience.
Representatives from both caravans gathered in front of concerned citizens and the media. Ben Gotschall began the session. “I’m a rancher from the Sand Hills. This pipeline threatens my home and my family’s way of life. We hear TransCanada trying to simplify this into environmentalists versus oil or obstructionists versus jobs and it’s not that simple. What I’ve seen in travelling the country is that there are so many people opposed to this project for so many reasons that to me it’s obvious that this pipeline is not in the best interests of this country.”

Members of the No Tar Sands Caravan and Stop The Pipeline Tour raise signs in front of the Stop The Pipeline bus.
Attending the meeting were local Nebraskans with similar concerns about their lands being destroyed by pipeline construction and the inevitable leaks and ruptures. Stop the Pipeline participant David Daniel shared stories of the intimidation of land owners faced to sign leases as well as the litany of questions about health and safety they’ve posed to TransCanada without an answer. “When the industry considers tar sands as a viable source of oil you know you’re in trouble,” he added to applause from all present.
I had a chance to speak for the No Tar Sands Caravan. Moved by the mix of tea party, republican, democrat, and progressive citizens represented in the room I said that “politics can divide us, but the Earth unites us.” I can report that this issue is uniting diverse citizens behind a new energy to defend our environment from the bottom up.
VIDEO: Stop The Pipeline Tour


About The No Tar Sands Caravan:

The No Tar Sands Caravan will arrive in D.C. on Friday, August 26th to join the Tar Sands Action Protests in front of the White House. They welcome anybody to jump on board during the final 2 days of their journey. Learn how you can participate at notarsandscaravan.org.
The No Tar Sands Caravan continues its 3,000 mile super low carbon footprint journey to cross the US carrying a message in opposition of the Keystone XL Pipeline and dirty Alberta Tar Sand Oil to the Tar Sands Action in Washington D.C. Along the route, the caravaners engage local citizens to gain a better understanding of differing views about the tar sands and pipeline. Follow the caravan on Twitter, Facebook, or NoTarSandsCaravan.org to live this unique experience firsthand.
at August 25, 2011