The Blacklisting of Buffy Sainte Marie

Originally published in 2013, Censored News shares our story or the Blacklisting of Buffy Sainte Marie again today, as the 50th Anniversary of the Occupation of Alcatraz is underway.


A gift arrived in the mail from Buffy Sainte-Marie, sent by Buffy from her home in Hawaii. It is a biography of her life, Buffy Sainte-Marie: It's My Way, written by Dr. Blair Stonechild, Muscowpetung First Nation.

Inside, there is a note written by Buffy, "To Brenda, with thanks for years of getting so much so right. Ke chi megawetch and aloha."

In the book's bibliography, there's an article that is part of the history of Censored News. This history begins on Navajoland. The year was 1999 and Buffy was performing at Dine' College in Tsaile, Arizona. 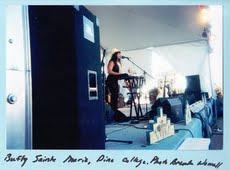 Backstage, Buffy described how she was blacklisted out of the music business in the United States by President Lyndon Johnson. Buffy's song Universal Soldier had become an anthem for the 1960s peace movement, the anti-war movement against the Vietnam war. Shipments of her records disappeared.

In the book, Buffy describes how Universal Soldier came to her, after seeing wounded soldiers at the San Francisco airport in 1963, while waiting for a morning flight to Toronto. As the song became an anthem for draft dodgers, Buffy was targeted.

Still, things were going well for Buffy at the time. "And then Kennedy was assassinated and Johnson took over and all of a sudden my radio play stopped, and my phone was tapped. I was no longer as welcome in America."

Buffy's efforts were focused on American Indian rights and the environment. She lent her voice to the struggles of the American Indian Movement, and the fishing rights struggle in Washington state was among those. Buffy sent funds from concerts for water for the Occupation of Alcatraz. When Buffy performed at an Alcatraz fundraiser at Stanford University, on Dec. 18, 1969, Richard Oakes presented her with a bouquet of flowers and read the Alcatraz Proclamation.

After the Occupation of Alcatraz, the FBI targeted AIM and other Native activists. FBI infiltrators were exposed.

The momentum grew with the Trail of Broken Treaties in 1972, and the Occupation of Wounded Knee in 1973. Buffy said a new world was coming, and she realized that no one was coming to help her.

"It's a do-it-yourself world," Buffy said. "I sang, 'Now that the Buffalo's Gone,' until I was sick of people coming to see the little Indian girl cry. The change is going to have to come from within us, the Indian people." 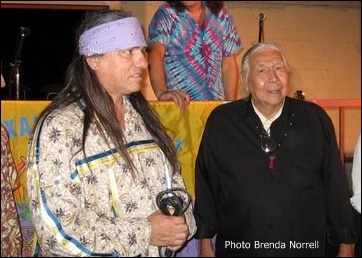 In the book, Dr. Stonechild describes how President Johnson viewed Buffy as a "loose cannon." When Ronald Reagan became president, Reagan's concern was for the international spotlight that Buffy was forcing on the issues of American Indian rights and injustices.

Buffy, critical of Reagan pretending to be friends with Indians, said she was tired of politicians "putting on war bonnets and shaking their rattles for twenty minutes." She wanted to see action, not pretense.

As American Indian issues moved to the forefront in the US, and around the world, Anna Mae Aquash's body was discovered in the Badlands. Buffy sang:

"My girlfriend Anna Mae talked about uranium, Her head was filled with bullets and her body dumped

Bury My Heart at Wounded Knee"

When Westerman, Buffy and Dennis Banks were in San Francisco in 1977, discussing the pending US legislation of the abrogation of Indian treaties, the idea was born for the Longest Walk across America in 1978.

During this time, Buffy's record company was shipping out boxes of her records, which were in demand, to distributors. However, somewhere along the way, those boxes were disappeared.

"The Johnson White House has created a blacklist of performers whose music 'deserved to be suppressed' -- it included Buffy, Eartha Kitt, and Taj Mahal," the book reveals. Their convictions and lyrics were encouraging citizen protest.

President Nixon continued what Johnson began. Buffy went from hit list to blacklist. When the Tonight Show invited her as a guest, it was with the demand that she not speak about Native rights or pacifism. She said "No."


The concerts were packed, and the demand for her records was at an all-time high. Still, the records were unavailable. In 1980, Buffy discovered the truth. A radio announcer apologized for being part of the effort to suppress her. He provided her with a copy of a letter on White House stationery that commended him for suppressing her.


During my interview with Buffy on Navajoland in 1999, she spoke of the uranium mining which was targeting Lakota land at Pine Ridge. She spoke of the shoot-out with FBI agents at the Jumping Bull residence at Pine Ridge on June 26, 1975, and the imprisonment of Leonard Peltier.

Buffy says that few people recount the true history of what happened on that day in history.

"Who recalls that on that day one-eighth of the reservation was transferred in secret -- on that day. It was the part containing uranium. That is what never seems to be remembered."


After Peltier was captured and imprisoned, and John Trudell's wife and young children were killed in a house fire, Buffy began to realize the risks to her life. In the years that followed, a secret FBI file revealed 33 pages of documents on her. The CIA, too, had been tracking her.


Still, her music and her commitment continues.


Read the rest of Buffy's life story, from her birth in her Cree homelands in Saskatchewan to Sesame Street and her Cradleboard Project, in Dr. Stonechild's biography, Buffy Sainte-Marie: It's My Way, published by Fifth House.

Also see the interview with Buffy from 1999, which I published online, after I was terminated by Indian Country Today in 2006: Uncensored Buffy by Brenda Norrell
https://bsnorrell.blogspot.com/p/uncensored-following-interview-with_27.html

With special thanks to Buffy Sainte-Marie.

(Top photo) Hulleah Tsinhnahjinnie, Dine' and Taskigi, is a professor in the Native American Studies Department at the University of California, Davis. Born in Phoenix, Arizona, she moved to Rough Rock on the Navajo Nation in the mid-'60s. "My father was called back to the community to be an illustrator at the Rock Rock Demonstration School," she said. She attended Rough Rock Demonstration School and later Chinle High School. After studying for one quarter at Navajo Community College, she transferred to the Institute of American Indian Arts in Santa Fe. From there, she attended the California College of Arts and Crafts in Oakland. "As a Two-Spirit person the politics of the Bay Area was welcoming, so I made California my home away from home." After graduating from CCAC, she worked as a graphic designer and photographer at the San Francisco Indian Center, and later in Oakland at the Intertribal Friendship House. She was a freelance photographer in her early years and then entered graduate school at the University of California, Irvine. She began teaching at UC Davis in 2004.
at November 27, 2019

Thank you, Buffy! Thank you, Brenda! Thanks to all of you who have your mind in sync with your heart. Johnson and Nixon violated their own law based on the U.S. Constitution, in particular, the Freedom of Speech and expression. I'm proud of Buffy and thank the Creator for her safety all these years.

Isn't it time to release, Leonard Peltier, from prison, in the United States! What can be done to make things right? OH, CANADA wake-up. We stand on guard for thee, What happens at Wounded Knee, happens to me.

Buffy Sainte- Marie IS a warrior of an unusual kind. A peculiar and indvidual soul, who follows a high-calling. Buffy Sainte-Marie stands tall and sings free.

I would have gone mad, if the FBI and CIA had followed, targeted abd blacklisted me! Thank you, Brenda Norrell and Censored News, for keeping the truth in the light. Stay bright!

These Truths Need To Be Mainstream Media. To Change
The People Of USA From Ignorant To Educated! To Fail
In This!,Is To Fail " Our Family!" And Fail All The Martyrs
" Gone With EAGLES !." My Name Is Robert Cadieux!
I Am 60 ! " Nomore The Mouse! "

Dear Brenda,
This piece is another remarkable example of your important contributions and excellent journalism. Your personal history with this topic makes the book and its back story especially useful for teaching my Navajo cohort of doctoral students at Fielding about Buffy's work (and yours) in a class I'm about to start. Wopila Tanka. Buffy is a role model for all of us as are you.
Akaywaciankinktay,
Four Arrows (Wahinkpe topa)
fourarrowsbooks.com

Sing on sister. Great respect for you. https://youtu.be/o5zb0WTSLsY

I followed Buffy in 1963 and got all her albums, deeply effected by her songs like My country tis of thy people we're dying (red white and blue hypocrisy) and did not know she was blacklisted. I should have known because I knew Pete Seeger and the Weavers as well as Cisco Houston, Ledbetter and others were blacklisted as well. SO MUCH FOR FREEDOM OF SPEECH.