The US War on Peacemakers includes Censoring Native Women's Voices

US threatened by peacemakers, spies on and imprisons them

If one reads through the Freedom of Information Act and whistleblower documents, it becomes clear that the US government considers the true peacemakers the biggest threat.
Peace groups are the most spied on and targeted group by the US -- those who work for peace and work against war. The US spies on those who expose the crimes of the US military and those who profiteer by way of US corporations. The US also imprisons the truth tellers and whistleblowers.
The corporate media in Indian country also censors the truth tellers.
Dine' Louise Benally of Big Mountain was censored by Indian Country Today when she compared the war in Iraq to the forced exile of Dine' from their homeland to Fort Sumner. (See censored article below.)
Buffy Sainte Marie was one of those who was forced out of the music business in the US by President Lyndon Johnson, primarily because of her song Universal Soldier and her anti-war stance during the Vietnam War.
This article by Buffy Sainte Marie was censored by Indian Country Today for seven years. When it was finally published in 2006, the information on uranium mining on Pine Ridge was censored by the newspaper.
In the interview at Dine’ College, Buffy Sainte Marie described how President Johnson wrote letters on White House stationery thanking radio stations for not playing her songs. Entire shipments of her records disappeared. http://bsnorrell.tripod.com/id99.html
Today the United States drones, computerized killings, targeted assassinations, kidnappings, and torture are among the most censored issues.
President Obama has exceeded even the Bush administration in the prosecution of whistleblowers and targeted assassinations with drones. These drone killings have murdered women and children. One US teen from Colorado, Abdulrahman al-Awlaki, was targeted and murdered by the US with a drone, while with his friends in a cafe in Yemen without benefit of trial.
The following comments by Louise Benally were censored by Indian Country Today from an article that I wrote before I was terminated as a staff writer in 2006.
When pressed to publish a correction to the article and include Louise Benally's comments, the newspaper refused. After I was terminated, I posted the article: http://bsnorrell.tripod.com/id78.html

Navajos at Big Mountain resisting forced relocation view the 19th
Century prison camp of Bosque Redondo and the war in Iraq as a
continuum of U.S. government sponsored terror.
By Brenda Norrell
Louise Benally of Big Mountain remembered her great-grandfather and

other Navajos driven from their beloved homeland by the U.S. Army on
foot for hundreds of miles while witnessing the murder, rape and
starvation of their family and friends.
“I think these poor children had gone through so much, but, yet they

had the will to go on and live their lives. If it weren’t for that, we
wouldn’t be here today.
“It makes me feel very sad and I apply this to the situation in Iraq.

I wonder how the Native Americans in the combat zone feel about killing
innocent lives.”
Looking at the faces of the Navajo and Apache children in the Bosque

Redondo photo, Benally said, “I think the children in the picture look
concerned and maybe confused. It makes me think of what the children in
Iraq must be going through right now.
“The U.S. military first murders your people and destroys your way of

life while stealing your culture, then forces you to learn their evil
ways of lying and cheating,” Benally said.

Photos: Fort Sumner: Without shelter or food many Navajos and Apaches died at Bosque Redondo, N.M., and on the Longest Walk to the prison camp. 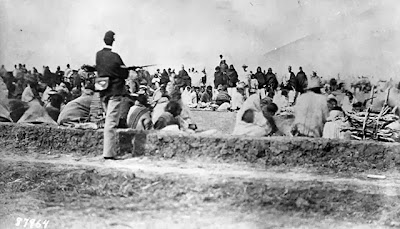 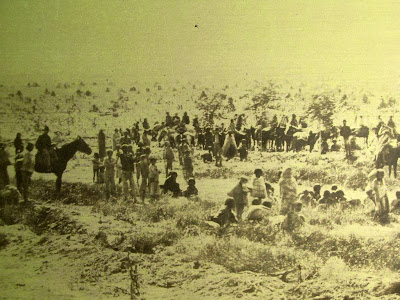 Censored News was created in 2006 after longtime staff writer Brenda Norrell was censored and terminated by Indian Country Today. Now in its 8th year, with 2.7 million views, Censored News is published with no advertising, sponsors or grants, and features a collective of volunteer journalists.

Brenda Norrell, thank you for Censored News and all that you do!

Thank you for writing this!