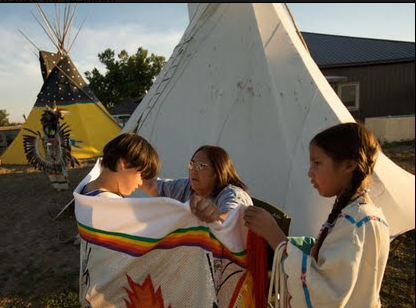 SAN FRANCISCO -- The Dalai Lama will honor Peggy Wellknown Buffalo, Crow, for her work with youths on the Crow Nation in Montana, when the Dalai Lama presents the honors for Unsung Heroes of Compassion this month in San Francisco. Actor Peter Coyote will emcee the event.

Peggy started The Center Pole in 1999, which now includes a summer youth recreation program, thrift shop and coffee shop near the Little Bighorn. Peggy is honored for nurturing more than 200 foster children. Peggy said, “The Center Pole is a place for Native American children to find help, hope, guidance, and new possibilities.”

The inspiring 51 Heroes from around the world include the inspiring real life heroes who create soup kitchens in South Africa and help children who are victims of trafficking in Nepal. Wisdom in Action made the announcement today, naming 51 Heroes from around the world to be honored by the Dalai Lama as Unsung Heroes of Compassion at the Ritz Carlton hotel in San Francisco on Feb. 23, 2014. The event will be available on the web by live broadcast.

The years spent there wounded Peggy deeply. “At school, we were not allowed to speak our native language or talk about home, our heritage, or our spiritual practices,” she recalls. “If we did, we were beaten with a wooden paddle. No one there believed Native students would ever amount to anything. I remember thinking this just wasn’t right to have no love, under- standing, or freedom of choice.”
Peggy found solace in the work she was assigned when she was just 12, holding and nurturing babies at the Pierre Indian School in South Dakota. “I discovered my gifts working with children during my boarding school days,” she says. She also remembers guidance she got from elders along her path. “When I was 18, a medicine woman encouraged me to dance and pray with her in the sun dance. My mother had just died. That is where I had my first vision to do what I am doing now.”
After graduating from Southwestern Indian Polytechnic Institute in Albuquerque, Peggy worked in Alaska for two years making eye-glasses. She then returned home to the Crow Reservation as a community health representative, determined to create a more hopeful future for the next generation of her people.
She built The Center Pole’s facilities on reservation land the U.S. government had ceded to her grandmother in the 1800s. Convinced Native children need a solid foundation in both traditional culture and modern ways, Peggy created opportunities to bridge these two very different worlds. The Center Pole supports chil- dren in school, helps them attend college, trains them in entrepreneurship and social justice, and connects them with elders who teach them tra- ditional crafts, music, and ceremony. Peggy’s hope is that these children will return to the reservation to help their community prosper.
At first, the work was difficult. Peggy was unfamiliar with resources off the reservation that might support her cause. She credits her friend and co-worker Susan Kelly with helping broaden her horizons. “For the past 18 years, through Susan, I have learned about all the resources beyond reservation boundaries that can help my children,” says Peggy. “Our teamwork constantly inspires me. Every day is a purposeful adventure.”
Today, The Center Pole hosts a basketball summer camp, runs a Planting Seeds program that provides children with experiences outside the reservation to strengthen the path to college and career, has a Digital Archives Project to bring images of sacred objects housed in mu- seums back to the community, and operates the Crow Voices radio station.
Peggy gives back to her community in other ways as well. Over the last 40 years, she has nurtured more than 200 foster children in her home along with her own five children, natural and adopted, who range in age from 15 to 41. “I am inspired by children’s laughter, enthusiasm, and curiosity,” Peggy says. “One happy, creative child makes it all worthwhile. Sometimes all they need is a pair of new shoes, a new experience, a book bag for school, hope on their faces, a smile after a warm meal, a hug, or a little attention.”
at February 11, 2014