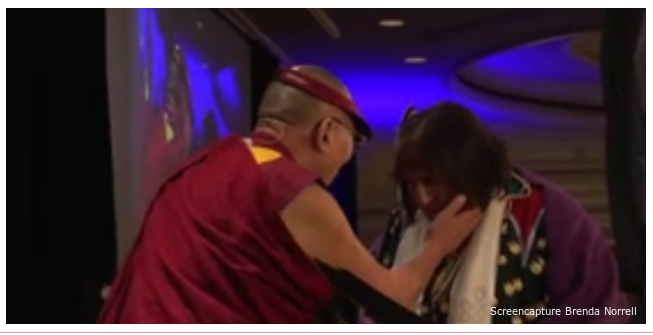 SAN FRANCISCO -- His Holiness Dalai Lama honored 51 Unsung Heroes of Compassion today, including Peggy Wellknown Buffalo, Crow, for Center Pole in Montana. Peggy was honored for her recreation program for children, and for nurturing 200 foster children in her home, in her homeland.

The Dalai Lama spoke on compassion, during the tribute to the efforts of 51 individuals from around the world who are working to alleviate the suffering of others without expectation of reward. The honorees included those rescuing trafficked children, providing soup kitchens, and clinics and doctors where the need is great. The 51 honorees came from Nepal, South Africa, Palestine and throughout the world.

Among the Indigenous honored was Carlos Tapedera, Raramuri (Tarahumara) for his work in maternal health in northern Mexico.

Grandmother Agnes of the 13 Indigenous Grandmothers spoke on the importance of water and laughter, and the need for both during the opening of the event.

"It is our job to do the best we can where we live," Grandmother Agnes said. "Be the voice for the green, our Mother Earth, and her blood, our water."

Grandmother Agnes, 90, spoke of the exile of the Dalai Lama and of her own ancestors. While remembering the harshness of these journeys and struggles, she returned to the importance of protecting Mother Earth.

"There is life in that water and we are the Caretakers," she said urging others to let this message ripple out. She also spoke of what has happened to the Tibetan people, describing them as "very dedicated to their prayers, songs and to each other."

Actor Peter Coyote, master of ceremonies, welcomed the 51 honorees on the stage and each was honored.

Peter Coyote said, "It makes us believe in goodness once again."

During the applause, Peter Coyote said, "Each clap is a commitment to action."

The years spent there wounded Peggy deeply. “At school, we were not allowed to speak our native language or talk about home, our heritage, or our spiritual practices,” she recalls. “If we did, we were beaten with a wooden paddle. No one there believed Native students would ever amount to anything. I remember thinking this just wasn’t right to have no love, under- standing, or freedom of choice.”
Peggy found solace in the work she was assigned when she was just 12, holding and nurturing babies at the Pierre Indian School in South Dakota. “I discovered my gifts working with children during my boarding school days,” she says. She also remembers guidance she got from elders along her path. “When I was 18, a medicine woman encouraged me to dance and pray with her in the sun dance. My mother had just died. That is where I had my first vision to do what I am doing now.”
After graduating from Southwestern Indian Polytechnic Institute in Albuquerque, Peggy worked in Alaska for two years making eye-glasses. She then returned home to the Crow Reservation as a community health representative, determined to create a more hopeful future for the next generation of her people.
She built The Center Pole’s facilities on reservation land the U.S. government had ceded to her grandmother in the 1800s. Convinced Native children need a solid foundation in both traditional culture and modern ways, Peggy created opportunities to bridge these two very different worlds. The Center Pole supports chil- dren in school, helps them attend college, trains them in entrepreneurship and social justice, and connects them with elders who teach them tra- ditional crafts, music, and ceremony. Peggy’s hope is that these children will return to the reservation to help their community prosper.
At first, the work was difficult. Peggy was unfamiliar with resources off the reservation that might support her cause. She credits her friend and co-worker Susan Kelly with helping broaden her horizons. “For the past 18 years, through Susan, I have learned about all the resources beyond reservation boundaries that can help my children,” says Peggy. “Our teamwork constantly inspires me. Every day is a purposeful adventure.”
Today, The Center Pole hosts a basketball summer camp, runs a Planting Seeds program that provides children with experiences outside the reservation to strengthen the path to college and career, has a Digital Archives Project to bring images of sacred objects housed in mu- seums back to the community, and operates the Crow Voices radio station.
Peggy gives back to her community in other ways as well. Over the last 40 years, she has nurtured more than 200 foster children in her home along with her own five children, natural and adopted, who range in age from 15 to 41. “I am inspired by children’s laughter, enthusiasm, and curiosity,” Peggy says. “One happy, creative child makes it all worthwhile. Sometimes all they need is a pair of new shoes, a new experience, a book bag for school, hope on their faces, a smile after a warm meal, a hug, or a little attention.”

Agnes Emma Baker Pilgrim is a Native American spiritual elder from Grants Pass, Oregon. She is the oldest member of her tribe, theTakelma. She is also the Granddaughter of the first elected Chief of the Confederated Tribes of Siletz - Jack Harney. Pilgrim was ElectedChairperson of the International Council of 13 Indigenous Grandmothers at its founding in 2004. "She has been honored as a "Living Treasure" by the Confederated Tribes of Siletz, and as a "Living Cultural Legend" by the Oregon Council of the Arts." -- Wikipedia
Posted by Censored News, publisher Brenda Norrell at February 23, 2014

Peggy, you are an inspiration! Thank you for your invaluable service and congratulations on your recent honor.