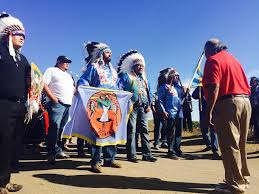 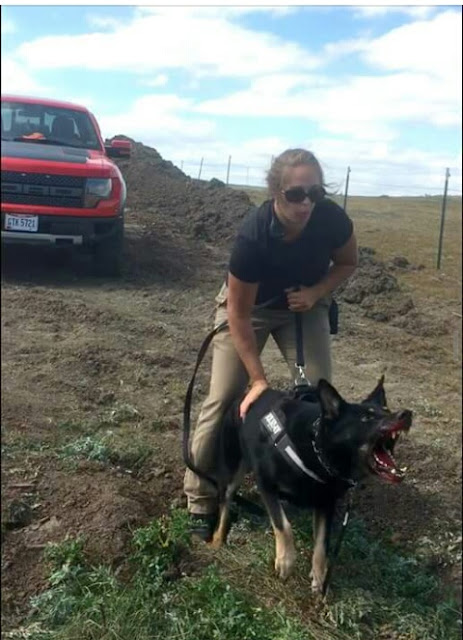 Photo: The blood of Native American water protectors is on this dog's teeth. 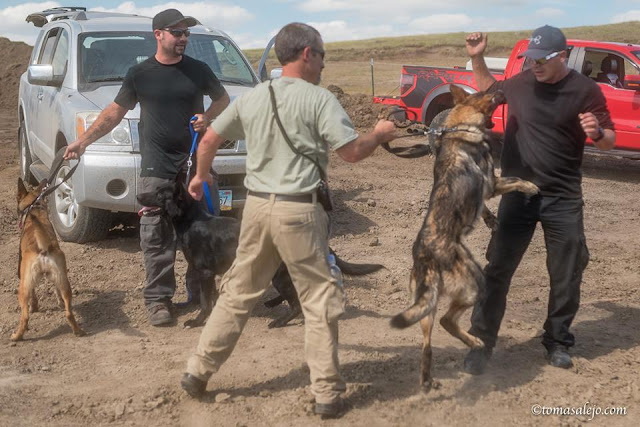 The photo below was taken on Saturday when the vicious attack dogs of the pipeline private security were out of control. The photo shows one of these vicious dogs attacking one of its own handlers. This photo is one of many photos that refutes the false statements made by the Morton County Sheriff on Saturday.

"Today, as we offered prayers to commemorate the 153rd anniversary of the Whitestone Hill Massacre against the Ihanktonwan Dakota peoples on the banks of the Cannon Ball River, a call to action was made to stand and block bulldozers as they plowed through an area containing ancient burial and cultural sites," Native Americans camped along the Missouri River at the Red Warrior Camp said.
"At approximately 3 pm, water protectors successfully stopped Dakota Access pipeline construction as it reached Hwy 1806 through nonviolent direct action and mass assembly."
"In that process, private security employed by Dakota Access, LLC, a subsidiary of Energy Transfer Partners, deployed vicious attack dogs, pepper spray and physical assault against the water protectors. According to the most recent update, 6 water protectors were bitten by dogs, a dozen or more pepper sprayed and numerous were physically assaulted; which included women."
This latest action comes one day after the Standing Rock Sioux Tribe submitted additional findings to the federal court to further support their case against the U.S. Army Corp of Engineers.
"Tribal historian Tim Mentz was invited to survey the property of a landowner whose land is in the pipeline corridor. In his statement to the court, Mentz states that his survey located at least 27 burials, 16 stone rings, 19 effigies and other features in or adjacent to the pipeline corridor. Mentz also stated that there are some features that are unquestionably eligible for listing under the National Historic Preservation Act."
The call for support was made by a Lakota Vietnam combat veteran who happened to come upon the destruction of the sacred sites area, just one mile north of the encampment.
"We felt the need to protect these significant sacred and cultural sites on the land, because neither Dakota Access LLC or the U.S. federal government is not protecting them."
"Red Warrior Camp was nonviolent and unarmed throughout this action. We will remain nonviolent and unarmed. We ask supporters to do so as well."
Additionally, they ask that supporters keep the attention on the fact that Energy Transfer Partners feels justified in using this level of force against unarmed and nonviolent water protectors and the state officers that are sworn to protect the people allowed it.
"We are calling for ALL water warriors around the world to come stand with us. If you are not able to join us physically, we ask that you join us in prayer and commit to our Weeks of Global Solidarity Actions from September 3-17, 2016," Native water protectors said.
About 5,000 people are camped to defend the Missouri River, burial grounds and sacred places from the pipeline construction.
The public is asked to call the Morton County Sheriff's office and demand that the Sheriff's office cease and desist, and put an end to making false statements about the Native American water protectors. These false statements are clearly aimed as escalating the situation for the purpose of using force against peaceful water protectors. 701) 667-3330 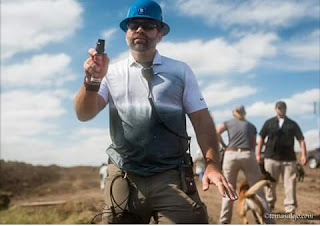 This piece of sewer scum is a real hero isn't he? The cowardly swine. From Wales UK

"THE PUBLIC IS ASKED TO CALL THE MORTON COUNTY SHERIFF'S OFFICE AND DEMAND THAT THEY CEASE AND DESIST, AND PUT AN END TO MAKING FALSE STATEMENTS ABOUT THE WATER PROTECTORS. THESE FALSE STATEMENTS ARE CLEARLY AIMED AT ESCALATING THE SITUATION FOR THE PURPOSE OF USING FORCE AGAINST PEACEFUL WATER PROTECTORS." [BRENDA NORRELL]
ADDITIONALLY, REMIND THE SHERIFF THAT THEIR JOB IS TO PROTECT THE PEACEFUL PROTESTERS, NOT TO PERMIT PAID THUGS TO ATTACK HUMAN BEINGS WITH DOGS.

LET IT RING OR CALL BACK, THEY ARE ANSWERING, JUST TAKES THEM A WHILE....

The Morton Co. police are standing aside and watching the pipeline company siccing dogs on peaceful protesters. It is against human rights to treat people this way. Hitler did it to the Jewish people and here we are over half a century later faced with the same attacks.

Stop the violence and lies in or to escalate the situation.

Call to Morton County Sheriff's Office,about the attack dogs, and lack of protection for water defenders and no arrests made of Energy Partners security 'dog handlers'.Sheriff's office not making any comments "about an ongoing investigation", press release on Tues. The attack dogs are vicious and could kill, but no comment about if Sheriff will do anything to stop the violence.
No comment about the Sheriff saying the camp had pipebombs or inflammatory statements &that peaceful people could be injured or killed. Morton County Sheriff's office said they are tape recording the call. (Retaliation against concerned calls for the right to gather, right to free speech,right to police protection from attack dogs, mace,?)

Call all you want this is #SheriffLiarKyle we're talking about he is nothing more than a boot licking lacky to the pipeline company.

Office of Emergency mgt. tom.doering@mortonnd.org
No Email for sherrif that I could find.