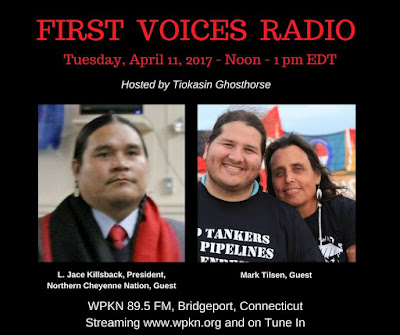 By Liz Hill, producer First Voices Radio
Censored News
First Voices Radio host Tiokasin Ghosthorse talks with two guests in this edition on WBAI on Thursday, April 13. Lawrence Jace Killsback (Voaxaa'e Nestoohe – Screeching Eagle) is President of the Northern Cheyenne Nation in Montana. He is a direct descendant of Chief Dull Knife, who led the tribe’s exodus from Oklahoma and the prison breakout from Fort Robinson, Nebraska on January 9, 1879. President Killsback has a bachelor of arts degree in Native American Studies from University of California-Berkeley and is currently pursuing a master’s degree in Public Health from the University of Montana. He is former Tribal Health Administrator for the Northern Cheyenne Tribe; former Chairman of the American Indian Health Leaders of Montana and former Chairman of the Committee on Health for the Montana and Wyoming Tribal Leaders Council. He is passionate in his advocacy for American Indian issues related to health care, economic development and tribal sovereignty.
Tiokasin and President Killsback will discuss a March 29, 2017 press release issued by the Northern Cheyenne Nation: “The Northern Cheyenne Nation Challenges Trump Administration’s Decision to Lift Moratorium on Federal Coal Leasing.”
Tiokasin’s second guest is educator and poet Mark Tilsen. He is Oglala Lakota. Tiokasin and Mark will address “Post-Standing Rock and Trump’s New Termination Era: Lessons Learned from the Front Lines.”
Noon to 1 p.m. EDT on WPKN 89.5 FM in Bridgeport, Connecticut. Streaming at www.wpkn.org and on Tune In and available in the WPKN archive immediately following the broadcast (see below for other time zones). This show will be repeated on WBAI 99.5 FM, New York City, on Thursday, April 13, 9-10 a.m. EDT. Streaming at www.wbai.org and available in the station’s archives immediately following the replay.
Listen locally to WPKN-FM at 89.5 FM. Streaming live at www.wpkn.org (noon-1 pm Eastern / 11am-noon Central / 10-11am Mountain / 9-10am Pacific / 6-7am Hawai’i.
at April 13, 2017