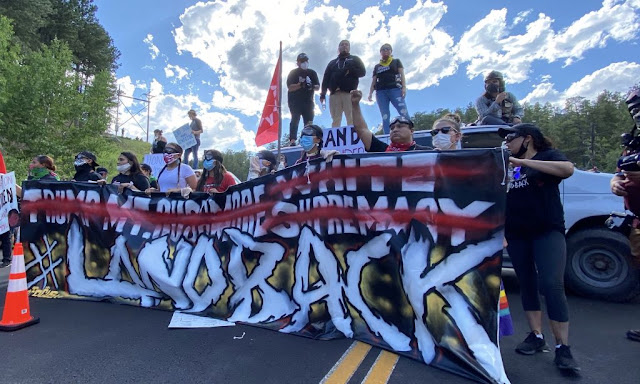 Rapid City, South Dakota — Friday’s acts of courage and civil disobedience by Indigenous people and our allies defending sacred lands in the Black Hills resulted in arrests and we imagine eventual criminal charges for these brave Defenders. These men and women were standing against the continued desecration of sacred lands that were stolen by the United States federal government from the Lakota Oyate to satisfy the greed of capitalism in this country. We are calling on friends and allies to donate to the Black Hills Bail and Legal Defense Fund to support these Land and Treaty Defenders.

As it stands today, Mount Rushmore is a national symbol of white supremacy, active erasure of Indigenous people in our homelands, and the continued exploitation of BIPOC bodies for the American dream. The federal government stole Paha Sapa (the Black HIlls) and allowed a member of the klu kluxx klan, Gutzon Borglum, to vandalize a holy mountain in with the faces of colonizers in memory of European encroachment, broken treaties, human rights violations, and acts of genocide against Indigenous and BIPOC people throughout Turtle Island. Photo by Willi White, NDN Collective.

Before being led off in handcuffs, Nick Tilsen, President and CEO of The NDN Collective said, “Our people have fought for this land and we will continue to. This won’t be the last. Our goal isn’t just to resist, but to radically imagine a better future.”

Mount Rushmore is an active symbol of white supremacy and systematic racism. In comradery with our allies and standing as Indigenous people, we made a stand against Donald Trump, the President of the United States, who entered Oceti Sakowin Territory without the free prior and informed consent of the Tribal Nations in this region. 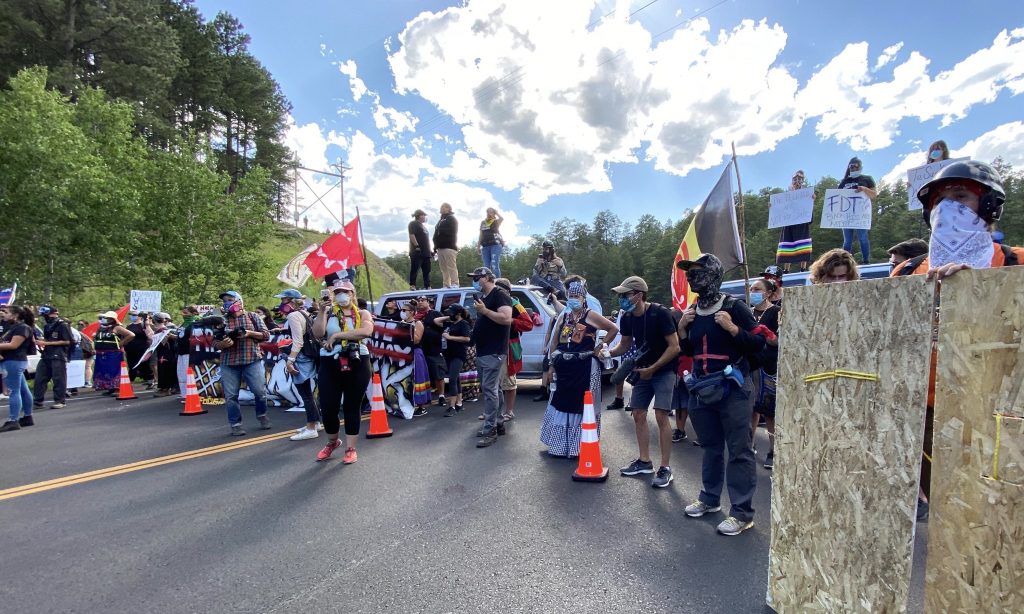 Krystal Two Bulls, a Native Veteran and Founder of Voices of the Sacred who was also arrested, shared from on the ground on Friday, “I’m a Native veteran, and here we have the national guard being deployed against US citizens. The US Military is the mechanism that upholds white supremacy and perpetuates militarism. We don’t need the military here, especially on this land, because this is Lakota territory. I’m a warrior, first and foremost I’m Oglala and Northern Cheyenne. Half of those soldiers down there probably don’t want to do this work. They have to follow orders. Deploying them on our own people, their neighbors and community members is wrong, and disgraceful. What I’m doing, in standing here for my people, that’s real service.”

The President’s uninvited presence in these sacred lands is a further desecration to the Paha Sapa. At a time of social and racial reckoning in this country, Trump has perpetuated a white supremacist narrative that has further divided the country. Standing in solidarity with all people of color, we as Indigenous people and our allies are committed to the dismantling of white supremacy and systemic racism in this country.

“The Black Hills Bail and Legal Defense Fund” is fiscally sponsored by the NDN Collective, a National Indigenous-led organization dedicated to building the collective power of Indigenous People, communities, and Nations. NDN Collective is a 501(c)(3) non-profit organization and donations to this fund are tax deductible. For more, visit http://bhlegalfund.org/
ABOUT THE NDN COLLECTIVE

Founded in 2018, the NDN Collective’s mission is to build the collective power of Indigenous Peoples, communities, and Nations to exercise our inherent rights to self-determination, while fostering a world that is built on a foundation of justice and equity for all people and the planet. We do this through building Indigenous power in partnership with the philanthropic and investment sectors. For more, visit www.ndncollective.org