Women Water Protectors Jailed Including Winona LaDuke: Enbridge Line 3 Continues Devastation
By Honor the Earth
Censored News
July 20, 2021
Seven Women Water Protectors are in Wadena County still today pending court who were held overnight including Winona LaDuke who are facing "Trespass on Critical Public Service Facilities, Pipeline, Utility -- Refuse to Leave Upon Demand." charges.
This charge of the colonial world is in conflict with the Anishinaabeg. In 2019, the White Earth Nation had passed a Rights of Manoomin, rights of Wild Rice, Resolution, that is tribal law. That requires the White Earth Nation to stand up for our sacred food. It also requires us to protect it, including the water which is tribal law. Enbridge is threatening the water, manoomin and all life the rivers bring within the 1855 Treaty as well as the 1863 + 1854. Potus has an obligation to uphold these treaties which are being violated.
The river has a right to life, which is being threatened by Enbridge’s extreme dewatering and insertion of a tar sands pipeline. In cooperation with the DNR, Enbridge circumvented the intent of the original permit and water appropriation suspensions by extracting water from watersheds across multiple counties, prior to these suspensions, to allow hydrostatic processes to continue during drought restrictions.
These acts are an egregious misappropriation of the original permit agreements and are in direct violation of Anishinaabe treaty rights and ongoing stewardship. There are suspensions, and Enbridge continues to take our water.
Winona was stripped of her traditional Turtle Island shirt and forced into an orange jumpsuit along with 6-other women for refusing to allow drilling under the sacred Shell River. Winona is protecting the water as these women are who joined her.
Today arraignments start at 11:30AM in Wadena Court and it could take all day and it's not 100 percent that they'll be released. To date, over 500 people have been arrested expressing opposition to Line 3.
Come to the Line: stopline3.org/hub or write Biden asking him to stop Line 3 at stopline3.org/biden
#StopLine3 #WaterIsLife #1855Treaty #ShellRiver
. 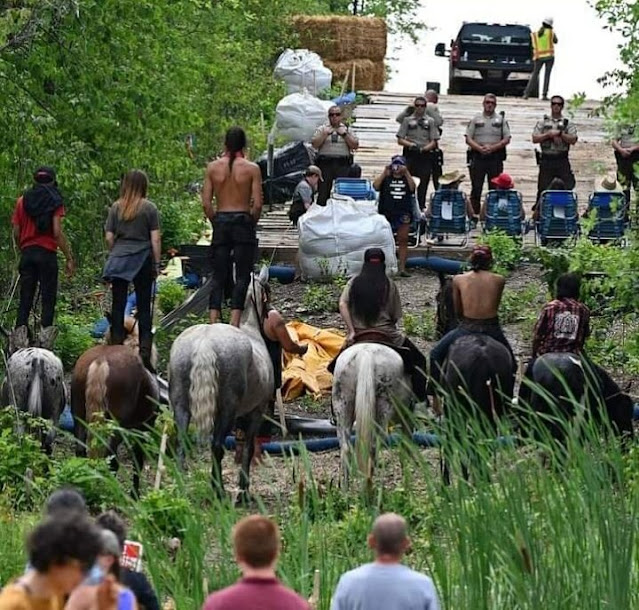