Seraphine Warren arrives in Washington DC in time for Indigenous Peoples Day, after having walked all the way from Sweetwater, Arizona, on the Navajo Nation, a trek of over 2,500 miles. She set out to raise awareness about the failures of government agencies and law enforcement in handling the MMIW, Murdered and Missing Indigenous Women, terror on the reservations. This terror struck Seraphine Warren's family when her beloved Auntie Ella Mae Begay went missing.

Warren began her prayer walk at her aunt’s home in Sweetwater, Arizona, at 2:30 am on June 15, 2022, a year to the day after her aunt went missing from the same location. Begay has not yet been found, and Law Enforcement agencies have failed to keep in contact with the family regarding their investigation.

According to the Navajo Nation Office of the President and Vice President (OPVP) Chief Legal Counsel, Stacy Allison, President Nez and various Navajo Nation departments/divisions “continue to provide updates to the family of Ella Mae Begay,” but this is not an accurate representation of the way authorities have handled communications with Ms. Begay’s next-of-kin or their attorney of record.
Since December, the Law Offices of Darlene Gomez, who represented Begay’s family had received no communication from the FBI and only one phone call with Dale West, which was initiated by Gomez’s office, after West and Henderson agreed to give the Law Office weekly updates in December.

Relatives and friends of the MMIW crisis' victims often end up conducting their own investigations, searches, and attempts to contact authorities to request updates – requests which regularly go ignored. Grieving families are saddled with the responsibility for keeping the attention of authorities and the public regarding their missing loved ones.

Advocates and representatives for victims and their families experience brutal stonewalling and intimidation tactics from Law Enforcement agencies whenever they attempt to request updates from investigators themselves. Phone calls and messages to the FBI almost always go unanswered.
FOIA requests to the FBI come back with generic refusals, citing the same law enforcement exemption to freedom of information legislation in almost every case. 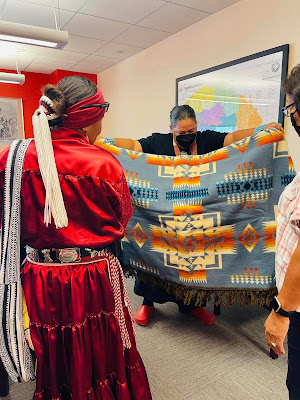 'I Could Go Missing Tomorrow'