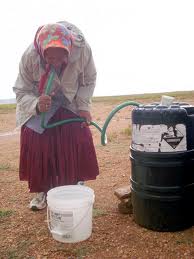 Talking Points on the proposed Northeastern Arizona Indian
Water Rights Agreement, Legislation 0422-10
Dated October 19, 2010
Photo: Navajo elder drinking contaminated water/Photo Forgotten People1. The Navajo Nation Council should vote No on the proposed Northeastern Arizona Indian Water Rights Agreement, Legislation 0422-10 until the Navajo Nation government installed in early 2011 can take up the settlement negotiations from an honest and fully informed perspective and a quantitative analysis is done of present and future needs for domestic use, large-scale agricultural projects and livestock.
2. There is not only no use of our Treaties in the 400 pages of the proposed Arizona Water Settlement, there is actually no mention whatsoever of either of our Treaties in the proposed settlement agreement.
3. The Navajo Nation is a federally recognized Indian Tribe, having two Treaties with the United States, dated 1849 and 1868 and is the only one of the 22 Arizona Indian Tribes that has a Treaty with the United States but the treaties are not mentioned in the Settlement.
4. The Settlement does not recognize the purposes of the Navajo Indian Reservation, as identified in the 1849 and 1868 Treaties as a "permanent home" specifically for agricultural purposes, with the 1849 Treaty referring to Navajos receiving "implements," which means farm implements, and the 1868 Treaty referring to "cultivating the soil," "seeds and agricultural implements," "farming and mechanical pursuits," and "sheep, goats, and cattle," and also encouraging us to "settle permanently" on our Reservation.
5. No "permanent home" of a people can exist without productive agriculture, and the Navajo People have always been and generally continue to be an agricultural people, while also engaging in many other ways of making a living.
6. Indian Tribes with Treaties rely on those Treaties as the most important foundation of their Indian reserved water rights, which are sometimes referred to as ''Winters Rights."
7. Indian reserved water rights are not lost by non-use, meaning tribes have ongoing rights to use water in the future that they have never used in the past as long as that water is appropriately quantified in the legal process and reasonably serves the purposes of the Reservation.
8. Productive agriculture requires large amounts of water, and agricultural tribes such as ours, with agricultural and permanent home purposes for our Nation, must have full and fair reserved water rights to support their agricultural and other uses, and not just rights limited to past and present uses.
9. In the 1960s and 1970s the Navajo Nation discussed claiming as Winters Rights as much as "two thirds of the annual flow of the Colorado River," which amounts to about ten million acre feet.
10. In 1997, Stanley Pollack publicly announced to a water rights meeting in Santa Fe, New Mexico that the Navajo Nation's basic surface water rights to the Colorado River System in the States of New Mexico, Utah, and Arizona must begin at no less than five million acre feet.


11. The proposed water settlement in its Part 4 even waives our past uses and prior rights to irrigation water in the Little Colorado River drainage, ownership rights that are likely worth $160,000,000 (at the low ownership value of $4,000 an acre foot) and which would otherwise be automatically reserved for us, and ignores values of waived rights and the compensation we should receive if we do not get the water and at our Winters Rights priority.
12. The provisions of the Settlement that address the Little Colorado River and groundwater have too many difficulties with their details for us to cover those provisions in this urgent resolution, but among those are a lack of specific information regarding construction of retentions structures with and without Hopi Tribal Consent, related capital improvement funds, a lack of quantification and specifics for large-scale agriculture, irrigation, livestock development and improvement of the range.
13. The carrot they are using to get support for the Settlement purports people will get piped water without appropriations earmarked in an economic climate with competing interests for funding needed.
14. Climate change is not considered. For the first time, federal estimates issued in August indicate that Lake Mead, the heart of the lower Colorado basin’s water system has the lowest 11-year average in the 100-year-plus recorded history of flows on the basin. The reservoir is now less than 15 inches above the all-time low of 1,083.2 feet set in 1956.
15. Exercise hozho go caution and care when a proposed Settlement is being rushed for a vote with language as follows:
The Settlement, Exhibit 14.1.1 states: Waiver and Release of Claims for
Water rights, Injury to Water Rights and Injury to Water Quality, by the
Navajo Nation on behalf of itself and its members and by the United States
acting in its capacity as Trustee for the Navajo Nation and its members
2.0 WAIVER AND RELEASE OF CLAIMS. 2.1 Except as provided in
3.0 hereof, the Navajo Nation, on behalf of itself and its
Members, and the United States acting in its capacity as trustee for the
Navajo Nation and its Members pursuant to the authorization set forth in
Section of the Act, hereby waive and release any claims against the State,
the Hopi Tribe, or any other person, entity, corporation or municipal
corporation under Federal, State or other law for all:
2.1.1 Past, present and future claims for Water Rights for Navajo Lands
arising from time immemorial.
16. The Settlement is a recipe for economic and political termination of our tribe.
17. Water is the most precious resource of all. Water is life. Please urge the NNC to vote against the proposed Northeastern Arizona Indian Water Rights Agreement, Legislation 0422-10 until the Navajo Nation government installed in early 2011 can take up the settlement negotiations and a quantitative analysis is done of present and future needs for a growing nation to fulfill its purpose affirmed in our treaty rights.
at October 19, 2010 No comments: