Showing posts from December, 2014
Show all

The Face of Resistance: Censored News 2014

Thank you to all the photographers who contributed to Censored News!

Censored News 2014: Defending the Sacred and Exposing the Exploiters

Around the world, the struggle to defend Mother Earth and human rights, and expose the exploiters is maintained by the good hearts as a sacred trust
by Brenda Norrell
Censored News

The year of 2014 was a difficult one for many, and the struggles to defend the earth and defend human rights were fought with sacrifice around the world. The most viewed articles at Censored News include the oil corruption and murder probe of business associates of Chairman Tex Hall, of the Mandan, Hidatsa and Arikara.

The fight against the Keystone XL tarsands continued in the Plains, with new camps of resistance. On the border, Tohono O'odham exposed the US spy cameras now monitoring traditional Indigenous Peoples and activists on the border. Th…
Post a Comment
Read more 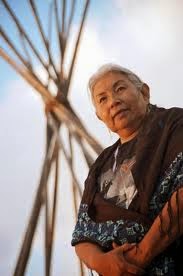 YANKTON SIOUX NATION -- In a determined move, the Yankton Sioux Tribe will square off with Transcanada on January 6, 2014 in order to seek the dismissal of Transcanada’s bid to certify the KXL pipeline to pass through South Dakota. The Tribe will present argument that so much has changed from the findings of fact and conclusions of law and fifty original conditions that were to be met by Transcanada, that it now appears to be a new pipeline.
The other three tribes will present argument in support of Yankton’s motion. This past fall of 2014, forty one intervenors and four tribes filed interventions against the development of the KXL pipeline at hearings held by the SD Public Utility Commission which is facilitated by three commissioners of t…
Post a Comment
Read more 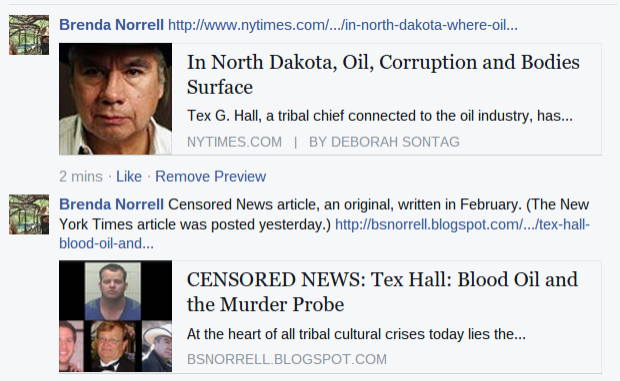 The New York Times has finally covered Chairman Tex Hall and the corruption in the oil and gas industry on the Mandan, Hidatsa and Arikara Nation in North Dakota.

The New York Times article today has almost the same title as Censored News original article published in February, as you can see above. Copy cat journalism is never flattering, especially when those who did the original work are not given credit, including those of us who are unpaid and do this as a labor of love.

Meanwhile, the Censored News original article on the resolution to suspend Tex Hall was the most read article at Censored News in 2014. Thank you to everyone who provided documents and photos.

Here's the original Censored News series published in February and March of this year.

Please post & distribute. Nia:wen. MNN. Dec. 23, 2014. Britain and its colonies, US, Israel, Canada, Australia and New Zealand, are partners in waging continual war against world peace. Colonization will end:
1.WHEN public officials make oaths to local natural inhabitants of the land and not to a foreign autocrat. 2.WHEN genocide is punished to the fullest extent so that it never occurs again. 3.WHEN Canada, a military corporation with no constitution and no democracy, is ended. There will be no need for police, prisons or the Admiralty law apparatus. The natural law of the land, Kaianere’ko:wa, will be implemented when every Council of women stands up in every community. 4.WHEN the Corporation of Canada is disbanded, its Ongwe’hon:weh creditors will be reimbursed for everything taken since the invasion, including the return of all lands and funds such as the Indian Trust Funds. 5.WHEN all programs of terror to further the colonial …
Post a Comment
Read more

The Ride to Wounded Knee 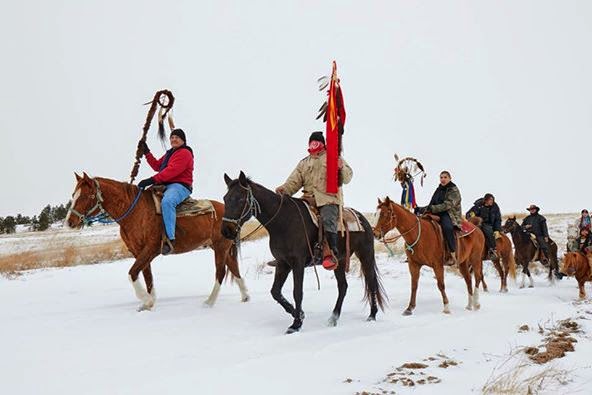 Thank you for sharing with Censored News!
3 comments
Read more 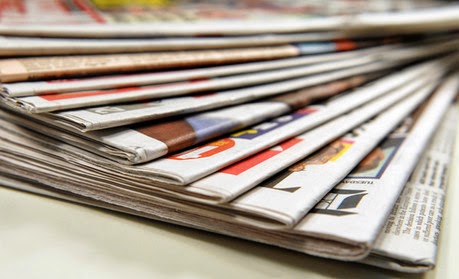 The mainstream media in 2014: No more than a black Op

By Brenda Norrell Censored News
TUCSON, Arizona -- No one spins wars better than CNN and no one kills with drones better than the White House. The paid media in the US marched to the tune of their handlers in 2014, continuing the rot and decay of US manufactured news. The news became no more than a black OP, a dark operation of the powers that be.
From the cardboard cutout anchors of CNN mimicking their handlers as caged parrots, to the plagiarism and rewrites of stay-at-home reporters for Indian Country Today, the news became, as my grandmother says, ready for the slop bucket.
The good news is that the alternative press blossomed beyond the fetid mess of the mainstream media in the US. Globally, the UK Guardian continued to lead the world in the news that the others tried to bury.
The New York Times was swimming for its life in the gush of real truth by Wikileaks, Anonymous and Snowden. The Times, out there somewhere, was carried downs…
1 comment
Read more
More posts