Showing posts from July, 2009
Show all

Worst Companies in the World, 2009

Corporations must face trial for crimes against Indigenous Peoples; Bush and Cheney must go on trial for torture

Corporations exploiting the water, land and resources of Indigenous Peoples, using displacement, rape, torture and assassination, must be charged in an international court. The corporations and the individuals must be charged for crimes against humanity.
While Canada leads the world in the number of gold and uranium mining corporations carrying out criminal acts, the United States leads the world in corporations of torture and war manufacturing.
The US and Israel lead the world in the production of Apartheid spy and border technology aimed at control and profiteering. The US and Israel also lead the world in misinformation technology, including misinformation-based television and print media.
This is only the beginning of the list of the Worst Corporations in the World 2009, now being updated:

By Brenda Norrell
Censored News
http://www.bsnorrell.blogspot.com/ Photo: Supai Gathering to halt uranium mining/Photo Brenda Norrell (Double click on photo to enlarge.)
RED BUTTE, HAVASUPAI TERRITORY -- Toronto-based Denison Mines (International Uranium Corporation) is threatening to reopen Canyon mine and drill for uranium at the south rim of the Grand Canyon. It only takes a quick look at the company to see that it has targeted Indigenous Peoples around the world with mining, poison and death.
Denison uranium mines and explorations are in White Mesa, Utah, McClean Lake in Saskatchewan, Australia, Mongolia and the Mutanga Project in Zambia.
Leaving a trail of disease and death around the world from mining, the stockholders of Denison need to know that their wealth streams from the poisoned water and lands of Indigenous Peoples. In White Mesa Ute country, near the Navajo Nation, the uranium mine was built on sacred kiva grounds and left a toxic dump of radioactivity.
During the Havasupai Gat…
1 comment
Read more

With the Supai in the language of love

RED BUTTE, HAVASUPAI TERRITORY -- Sometimes it is hard to put into words the beauty, grace and love. That is the case of being with the Supai elders from the canyon as we gathered at sacred Red Butte. The gathering was to oppose uranium mining in the Grand Canyon, but it was so much more. The people spoke with the language of love and carried out their ceremonies with the assurance of things that are to come that are now unseen.
In my 27 years as a journalist, I've covered about every kind of event, but never one like this. A heartfelt thank you to the Supai elders for sharing their lives with all of us. We broadcast live Thursday through Sunday on www.earthcycles.net and most of the time on the FM radio as well at the south rim of the Grand Canyon. Govinda brought the solar powered bus/radio station in from northern California.
Thank you to all of those who came, Louise Benally from Big Mountain, Anna Rondon, Navajo, P…
1 comment
Read more 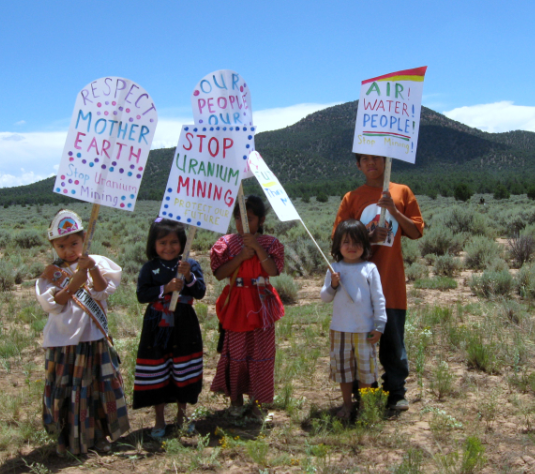 Tiny Hanna, Havasupai, spoke of the time when Supai lived all through these lands, now the Grand Canyon National Park. Tiny Hanna sang a morning prayer that the uranium mining would blow away. Click video arrow to watch. (Video by Brenda Norrell)

The Grand Canyon is a national treasure, inviting 5 million people every year to explore and be inspired by its beauty. To the Havasuw 'Baaja, who have lived in the region for many hundreds of years, it is sacred. As the "guardians of the Grand Canyon," we strenuously object to mining for uranium here. It is a threat to the health of our environment and tribe, our tourism-based economy, and our religion.

Thank you, Secretary of Interior Ken Salazar, for announcing a two-year moratorium on new mining claims in the 1 million acres of lands around Grand Canyon National Park. But existing claims, such as those pursued by Canadian-based Denison Mines Corp., still threaten the animals, air, drinking water and people of this region.

Denison, which has staked 110 claims around the Grand Canyon, is seeking groundwater-aquifer permits that would allow it to reopen the Canyon Mine, near Red Butte on the South Rim, as well as…
Post a Comment
Read more
More posts