By Schools for Chiapas 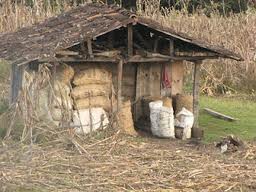 Photo  by Peter Brown
Jan. 2011 photos of Zapatista corn storage units have two really bad bugs which are very good at eating these Mother Seeds. There are photos from the Neem tree based resistance and these insect enemies of the Mayan peoples of Chiapas, Mexico. Can you help us identify this bad bugs and learn more about how to control them? Do you know someone who might want to help? Contact Peter Brown at pedrocafe@schoolsforchiapas.org
http://www.schoolsforchiapas.org/
at January 17, 2011 No comments: