Is the Cobell settlement another scam?
UPDATE: Attorneys ask judge to more than double their feesBy Brenda Norrell
http://www.bsnorrell.blogspot.com/

Contact: Robin Silverrsilver@biologicaldiversity.org
(602) 799-3275 (Photo: Mount Graham website: www.mountgraham.org )
Action in support Winona LaDuke's presentation at NAU campus on Feb 1st. Protest rally to stop NAU desecration and extinction on Mount Graham!
When: Tues. February 1.
Gather at 5:00 PM
Walk starts at 6:00 PM
Where: NAU High Country Conference Center located at 201 West Butler Avenue.
Meet outside near Butler Ave and Conference Center main entrance.
Look for banners.
Why: The Mount Graham telescope project desecrates a central Apache religious site. It destroys and fragments the old growth forest heart of an endangered species' critical habitat.
Northern Arizona University is a partner in the projects centerpiece Large Binocular Telescope.
NAU administration has ignored previous attempts to address this issue.
Please join us!
Who: NAU students, faculty and concerned community members. Elders from San Carlos Apache will be in attendance.
This action is being supported by: Center for Biological Diversity, Mount Graham Coalition, and Indigenous Action Media.
Plan: Walk from Conference Center to Winona LaDuke's speech at Ardrey
Auditorium (ticket necessary for admission: http://nau.ticketforce.com/ordertickets.asp?p=432&backurl=default.asp)
Contact: NAU President Haeger and urge him to respect the Apache, to save the Mount Graham red squirrel and to get NAU out of the Mount Graham telescope project.
Phone: (928) 523-3232 Email: John.Haeger@nau.edu
Further Info: http://www.biologicaldiversity.org/news/press_releases/2010/mount-graham-red-squirrel-12-22-2010.html
NAU OFF MOUNT GRAHAM! PROTECT SACRED SITES!
Background:
For the Apache, Mount Graham or Dzil nchaa si' is of central sacred importance to the Western Apache as a geographical landform, as a burial ground, and as home to the Gaahn (mountain spirits). Mount Graham is also sacred in very specific locations. One of these sites is Emerald Peak where the centerpiece Large Binocular Telescope (formerly the Columbus telescope) is now located. NAU is a partner in this telescope which is now visible from the San Carlos reservation.
The Mount Graham Red Squirrel is found nowhere else except on Mount Graham. Only a little more than 200 squirrels now survive. The telescopes destroy and fragment the forested heart of the squirrels' essential spruce-fir habitat. Nearly one third of the spruce-fir was needlessly destroyed recently under the guise of protecting the telescopes from fire.
at January 31, 2011 No comments: 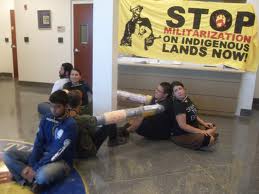 Border Patrol Headquarters Occupation Protesters to Fight Charges
Group Calls for Further Action Against Border Militarization
TUCSON -- On February 23, 2011, 2:00 PM at Tucson City Court, five of the six protesters who locked-down and occupied the US Border Patrol Tucson Headquarters on May 21, 2010 are going to trial fighting one count each of "criminal trespassing". One of the six has chosen to take a diversion.

The action was taken, in part, to demand that BP, Immigration Customs Enforcement (ICE), their parent entity, the Department of Homeland Security (DHS), and the Obama administration end militarization of the border, end the criminalization of immigrant communities, and end their campaign of terror which rips families apart through increasing numbers of raids and deportations.

Alex Soto, one of the arrestees and member of O'odham Solidarity Across Borders states, "As we did not enter the BP headquarters alone but with prayers of O'odham elders and community supporters, we are asking for support once again for our continued stand against border militarization. Our messaging is the reality for everyone that is forced to feel the pain that borders inflict upon us in our daily lives. The Border Patrol is not the only agency responsible for the militarization of the border – and it's subsequent destruction of Indigenous and migrant communities – or the only benefactors of border militarization." Soto states.

In a previous release O'odham Solidarity Across Borders and O'odham elders stated, "The development of the border wall has lead to desecration of Tohono O'odham ancestors graves, it has divided communities and prevents O'odham from accessing sacred places. Troops and paramilitary law enforcement, detention camps, check points, and citizenship verification are not a solution to "issues" of migration. Indigenous Peoples have existed here long before these imposed borders, elders inform us that we always honored freedom of movement. Why are Indigenous communities and the daily deaths at the border ignored? The impacts of border militarization are constantly made invisible in the media, the popular culture of this country and even the mainstream immigrants rights movement which has often pushed for “reform” that means further militarization of the border, which means increased suffering for Indigenous communities. Border militarization destroys Indigenous communities."

Since the creation of the current U.S./Mexico border, 45 O’odham villages on or near the border have been completely depopulated.

According to the migrant support group No More Deaths, from October 2009 to Sept. 2010 there have been more than 250 deaths on the Arizona border alone.

Put this message in action and help end the attack on Indigenous and migrant communities. Take these messages to the street where you are. If you can, join us inside and outside the court room in Tucson at 2:00pm. on February 23, 2011.
Tucson City Court is located at 103 E. Alameda St. Tucson, AZ.

Additional ways to take action in your community to bring awareness to the impacts of the militarization of the border and criminalization of our communities:

5. Support local Indigenous struggles for self-determination and freedom of movement.
In particular, bring awareness to Indigenous communities on the US/Mex border that have been militarized.

To view the occupation video and for additional resources please visit:
http://www.oodhamsolidarity.blogspot.com/
http://www.survivalsolidarity.wordpress.com/
at January 31, 2011 No comments:

Fat Takers and the return to awareness of nature

Mohawk John Kane: 'Nature will always be there to teach'
By Brenda Norrell
Censored News
http://www.bsnorrell.blogspot.com
Photo: Schools for Chiapas published with permission
.
National Congress of American Indians President Jefferson Keel's State of Indian Nations address earned him the title "Fat Taker," from Lakotas. Mohawk John Kane responded with a reminder that the truths within nature are always there for people to return to, when they have lost their way.

Keel’s address earned him the title “Fat Taker,” for his focus on the Rape of Mother Earth, exploiting the land and resources for profits, without regard to the health of the people or resources such as clean water for future generations.

Debra White Plume, Lakota on Pine Ridge Indian land in South Dakota, said, "Some 'Indians' are Fat Takers in disguise, think nothing about raping Mother Earth, Ina Maka, Unci Maka -- so long as they get the 'best price.'"

Mohawk John Kane said an awareness of nature is there for people to return to.

"Our culture was based on and committed to nature. Those that have tried to transform our knowledge and teachings into beliefs or religion have lost their way. The good news is that nature will always be there to teach even when we fail to."
"We could lose every word or act our ancestors ever tried to hand down and get it all back if we just can return to respecting our relationship to creation. No great spirit, no hocus pocus, no faith; just awareness. Of course we will never lose all that those that came before us tried to leave for us but we certainly can continue to misinterpret things as the last 7 or 8 generations have," Kane said.
.
John Kane's Native Radio, "Let's Talk Native Pride," is on the web:
http://letstalknativepride.blogspot.com
at January 31, 2011 No comments: