Thank you, the journey was never my own 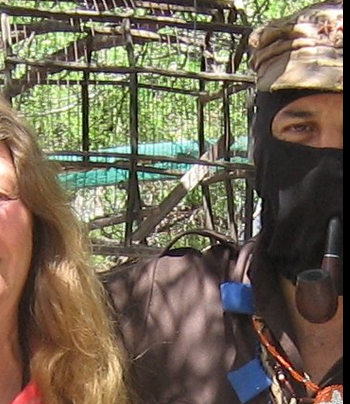 Today I'm especially thankful for this road I've been on, which was never really my own. I've never spoken in public about journalism over the past 32 years, because, for me, it was a matter of following my inner voice, and what some call the Spirit or Creator.

There were turning points along the way, and today, I will remember a few of those. The first turning point came when Louise Benally of Big Mountain on Black Mesa shared the truth with me about Peabody coal. "The corporations lie," she said. At the time, I was a new reporter for Navajo Times and living in a log cabin in the Chuska mountains on Navajoland. During those years, my friends took me to the home of Chief Frank Fool's Crow on Pine Ridge. While on Hopi land, Dan Evehema, more than 100 years old, told me, "Don't ever apply for grants, or they will own you." (And I didn't.)

The next time for a new beginning was when I first traveled with an Indigenous delegation to Chiapas, nearly two decades ago. The publisher who created Indian Country Today, Tim Giago, and my editor Monty Ecoffey, both Lakotas, made that possible. Once in the mountains and jungle of Chiapas, there was no turning back. There was the reality of what the United States and corporations are doing to the people.

Thanks to the Zapatistas in a barrio in Tucson, the journeys with the Zapatistas continued through the years, with the caravan across Mexico, and gatherings in Chiapas in the south, and Sonora in the north. The force behind those who kept this going, as they have said about Che, was the force of love, and the outrage at the injustice. It was truly the path of justice, dignity and autonomy.

There was a final turning point which brings me to today, living near the southern so-called border, and learning from the Tohono O'odham in the south and the Mohawks in the north. Along the way, Govinda at Earthcycles and I broadcast live for five months on the Longest Walk 2 northern route in the Earthcycles bus. What I brought away from this was beautiful friendships, especially with the young Native American walkers and their promise of the future. During the walk, I was also able to visit Kahentinetha, publisher of Mohawk Nation News, after she was nearly killed by Canadian border patrol agents. She was forced into a stresshold at the border which resulted in a heart attack.

A couple of years later, as a member of the foreign press, I was in the mountains of Bolivia, with President Evo Morales, during the gathering for the protection of Mother Earth. Along the way, both Wikileaks and Anonymous provided truth online that would have never been made public otherwise. Censored News coverage became global with volunteer translators and websites in Europe.

Along the way, I've learned another important life lesson: When everything looks the bleakest, something good is just around the corner.

So today, I say thank you to each of you who inspired me, helped me, and encouraged me on. You know who you are. Thank you, Brenda

Brenda Norrell has been a reporter in Indian country for 32 years, beginning with Navajo Times during the 18 years that she lived on the Navajo Nation. She was a correspondent for AP and USA Today while living on Navajoland. Then, she served as a longtime staff reporter for Indian Country Today. In 2006, she was censored and terminated by ICT, under new ownership, and created Censored News as a result. Censored News was published for eight years as a labor of love with no advertising or grants. Censored News exposed what is being censored in Indian country and provided a publishing platform for grassroots voices. Censored News archives continue to be read around the world by thousands of readers each week in countries circling the earth. Today, the new Indigenous Resistance, a collective of writers, continues this work.
Indigenous Resistance http://indigenousresistancejuly2014.blogspot.com/
at July 29, 2014

Bless you, Brenda. Good luck in your future endeavors.