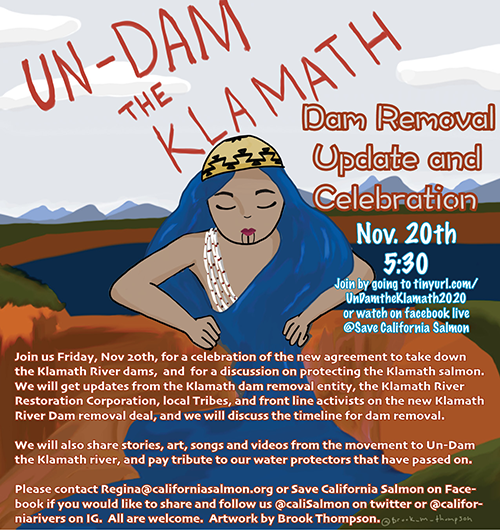 Save California Salmon
If anyone would like to talk please let us know. The Yurok and Karuk Tribes plan to present along with the Klamath River Renewal Corporation, the dam removal entity. Then we are hoping to hear from additional Tribes and organizations and the Klamath and Trinity River water protectors, including the elders and fishing families, that have engaged in nearly two-decade of advocacy and actions to make this happen.
Tribal Leaders, CA and Oregon Governors and Warren Buffett Sign Klamath Dam Removal Agreement

SACRAMENTO – On November 17, leaders from the Yurok and Karuk Tribes, the Governors of California and Oregon, and executives from Berkshire Hathaway and PacifiCorp unveiled a new agreement to remove four Klamath River dams, including two located in California and two in Oregon.

In their new agreement, the states of California and Oregon will partner with the Klamath River Renewal Corporation (KRRC) to assume liability for the dam removal project, transferring the license to operate the dams from PacifiCorp.