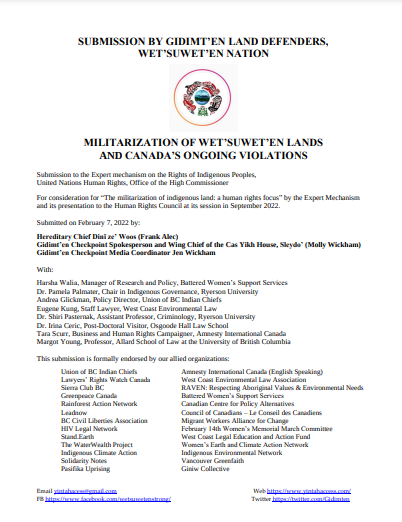 "Wet'suwet'en is an international frontline to protect the rights of Indigenous peoples and to prevent climate change."

February 7, 2022First Nations land defenders on Monday filed a submission to the United Nations detailing how their territory and human rights are being violated by Canadian and British Columbian authorities in service of a fossil fuel corporation's gas pipeline.
"We are intimidated and surveilled by armed RCMP, smeared as terrorists, and dragged through colonial courts. This is the reality of Canada."

The submission to the United Nations Human Rights Council was filed by the Gidimt'en—one of the five clans of the Wet'suwet'en Nation—who for years have been fighting to stop the construction of Coastal GasLink's pipeline through their territory in northern British Columbia.

Scores of Wet'suwet'en land defenders, including four hereditary chiefs, have been arrested and charged, as have journalists and legal observers. In December, Coastal GasLink dropped charges against two journalists who were arrested while covering a militarized police raid last November 19.

More than 30 land defenders are scheduled to appear in the British Columbian Supreme Court in Prince George, built on the site of a burned Lheidli T'enneh village, next week.

Meanwhile, construction continues on the 416-mile pipeline, which will carry gas from Michif Piiyii (Métis) territory in northeastern British Columbia to an export terminal in coastal Kitimat, on the land of the x̣àʼisla w̓áwís (Haisla) people.

"By deploying legal, political, and economic tactics to violate our rights, Canada and B.C. are contravening the spirit of reconciliation, as well as their binding obligations to Indigenous law, Canadian constitutional law, UNDRIP, and international law," the Gidimt'en submission states, referring to the United Nations Declaration on the Rights of Indigenous Peoples.

Gidimt'en Checkpoint spokesperson Sleydo' said in a statement that "we urge the United Nations to conduct a field visit to Wet'suwet'en territory because Canada and B.C. have not withdrawn RCMP from our territory and have not suspended Coastal GasLink's permits, despite the United Nations Committee on the Elimination of Racial Discrimination calling on them to do so."

"Wet'suwet'en is an international frontline to protect the rights of Indigenous peoples and to prevent climate change," she added. "Yet we are intimidated and surveilled by armed RCMP, smeared as terrorists, and dragged through colonial courts. This is the reality of Canada."

Band Council! Our children were not murdered so you can sell us out. You’ve gone too far! An emergency has been called to deal with the acts of the Canadian government’s ‘band council’ system. They are treasonous to the kaianerekowa.