The Nye County Sheriff's Department said Myron Dewey died as a result of a head-on collision, when a truck pulled into his lane on a dirt road near Yomba, Nevada.

YOMBA, Nevada -- The Nye County Sheriff Department's accident report states that the fatal accident that resulted in the death of Paiute Shoshone Journalist Myron Dewey was the result of a second vehicle pulling into his lane and causing a head-on collision.

The driver of the second vehicle, John David Walsh of Reno, said he was headed north on Ione Road, a dirt road in Nye County, when a vehicle passed him headed south and stirred up dust. Walsh said he pulled into the other lane to get out of the dust, and that is when the head-on collision occurred.

Walsh, who was driving a grey Toyota pickup, was airlifted to Renown Medical in Reno. Walsh was interviewed there by the Nevada Highway Patrol.

Upon arriving at the crash scene, the fire department extricated Myron from his vehicle and began CPR.

When the Nye County Sheriff's deputy arrived at 12:47 pm, a Care Flight emergency nurse and EMT were administering CPR. Myron was pronounced dead at 1:19 pm., about two hours after the impact.

Myron had scrapes and lacerations on his right ankle and left leg and bruising in the chest area, according to the Sheriff Department deputy's accident report. Both doors on the passenger side of Myron's vehicle were removed.

A family member living nearby, identified as the next of kin, was on the scene when the responding Nye County Sheriff's deputy arrived.

The first person to arrive at the scene, who called 911, said Walsh was on the ground outside his truck and crawling for help.

Both vehicles were damaged on the front driver's side. A second Care Flight transported Walsh to Renown Medical. The Sheriff's Department accident report states the head-on collision occurred just north of the Yomba tribal office at 11:12 am on Sept. 26, 2021.

A Nevada Highway Patrol Trooper took a blood alcohol sample with permission from Walsh at Renown Medical. The Sheriff's deputy's report said this was to be delivered in Reno for analysis.

The Nye County Sheriff deputy's report was received Wednesday afternoon by Censored News. Nye County stated the traffic crash report is a "draft" traffic report and gave Censored News permission to publish it, stating that it was released.

The Nevada Highway Patrol Traffic Crash Report, which is stamped "draft," states in its Initial Report that the head-on collision was caused by Walsh's visual impairment.

Walsh was driving 55 miles per hour and hit Myron's white Toyota Highlander head-on. The vehicles spun ten feet counter clockwise before halting on the left side of the road.

The report states that Myron was trapped inside his vehicle after impact.

The Nevada Highway Patrol report states that Walsh was at fault when he drove left of center and hit Myron head-on.

It states that Walsh's injuries were 'A' category. This is categorized in Nevada as incapacitating with severe injuries. The road conditions were dry on the dirt and gravel road and visibility was clear.

The Nevada Highway Patrol report, also received Wednesday by Censored News, states John David Walsh was driving a 2017 Tacoma Toyota and lives in Reno. No other information is available on Walsh at this time.

The report states that alcohol and drug impairment were not involved in the accident. The birthdates of both drivers are redacted in the reports.

The Nevada Highway Patrol investigation is stated as complete. However, its Traffic Crash report is shown as Initial Report and stamped "draft." The crash report shows the op 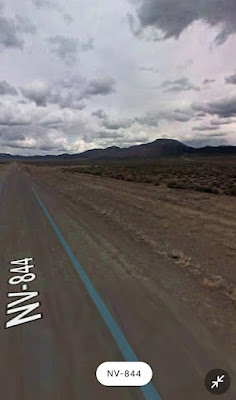 Myron: The Day Before

Myron was widely known as a Water Protector at Standing Rock, who carried out drone surveillance of militarized law enforcement during the defense of the water from Dakota Access Pipeline in North Dakota.

The day before the fatal accident, Myron live streamed from the Navy's Fallon bombing range in his homeland, east of Reno, Nevada, reporting on the dangers of the bombing range to the people and sacred land.

The bombing range, in central Nevada, is used by the Navy Seals for bombing, ground maneuvers and electronic warfare, according to the U.S. Navy.
Although large scale expansion is now being pushed, Native people are opposed to the massive bombing range expansion. Mryon and Native leaders in the region have been speaking out and battling this expansion.
Returning to his childhood homeland at Yomba on Saturday, the day before the fatal crash, Myron said live on social media during the live stream, "This is what we grew up around, the military industrial complex."
Myron said the military was flying over sacred places. Describing the destruction of the sacred here, he said both mining and the bombing ranges have caused desecration of sacred places.
Myron warned of the lithium mining now targeting Thacker Pass in northern Nevada, which is a Massacre site.
Myron said when he hears, "Thank you for your service," another image comes to mind: "Killing, rape, genocide."
"I am a survivor of a mass genocide across the United States."
Pointing out that genocide is being carried out around the world, he said, "In Nevada it is still fresh."
At Standing Rock, Myron and the Water Protectors witnessed an Avenger missile launcher. On that Saturday, now five years after Standing Rock, in the Nevada desert at the bombing range, Myron filmed another Avenger, and pointed out that it is protecting communication equipment.
Myron said his video is to warn his grandchildren of this corporate greed, and the greed that demands power and military force.
Speaking on climate change, he said there were not enough pine nuts to feed the people during ceremony this year.
Myron also speaks of the green-washing now targeting Nevada, and the need to protect and defend the land and water.
"Take a breath," he said, "Take a moment and appreciate what you have." 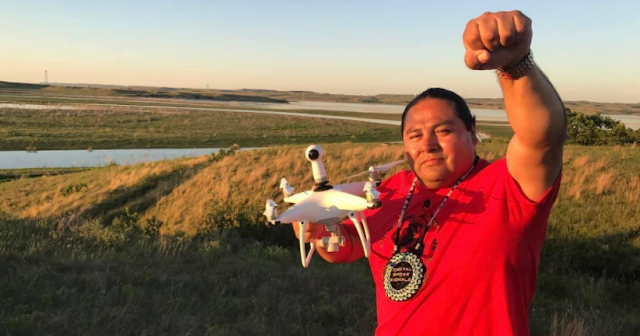 Myron Dewey
Lehman Brady Professor
https://documentarystudies.duke.edu/people/myron-dewey
Myron Dewey was Lehman Brady Visiting Joint Chair Professor at Duke University and the University of North Carolina–Chapel Hill in Spring 2019; he was based at Duke’s Center for Documentary Studies. In “Remembering Myron Dewey,” CDS undergraduate education director Chris Sims remarks, “Myron posed questions of his students and colleagues that asked us to re-think fundamental assumptions about our relationships to land, education, and to creation itself.”

Myron Dewey (1972–2021) was a filmmaker, journalist, digital storyteller, and the founder of Digital Smoke Signals, a media production company that aims to give a platform to indigenous voices in media. His drone footage of the Standing Rock movement protesting the Dakota Access Pipeline (DAPL) marked him as one of the most important journalistic voices working on environmental and indigenous issues today. Through both Digital Smoke Signals and his own media work, Dewey sought to bridge the digital divide throughout Indian Country and to indigenize media with core Indigenous cultural values.

Dewey received numerous awards for his journalism and media production, including the Michelle Moor Award for Community Journalism and the Man of the Year Award from Medicine Winds News. In 2018 he was given an Award of Merit by the University of Kansas Department of Film & Media Studies; he was a 2017 winner of the New York City Drone Film Festival in the category of News/Documentary for a short film monitoring North Dakota police at the NoDAPL protest site; and he co-directed the award-winning 2017 film Awake: A Dream from Standing Rock, which tells the story of the NoDAPL movement and the native-led peaceful resistance and fight for clean water, the environment, and the future of the planet.

Dewey had over twenty years of experience working to bridge the digital divide in media and technology throughout Indian Country, both as an educator and technology expert building technology infrastructures. He began his career as a wildland firefighter and firefighting trainer at Haskell Indian Nations University and went on to work as a webmaster, technical trainer, and technical consultant at both Haskell Indian Nations University and the University of Kansas from 2000 to 2007. From 2009 to 2013 he taught computing, digital media, and mobile app programming  Northwest Indian College in Tulalip, Washington, where he received the Teacher of the Year Award in 2010. That year, he was accepted into the acclaimed Americans for Indian Opportunity (AIO) Ambassadors Program, where he expanded his projects to build technological equity for indigenous people.
About Censored News
Censored News was created in 2006 after news reporter Brenda Norrell was censored and terminated as a longtime staff reporter at Indian Country Today. Norrell has been a news reporter in Indian country for 39 years. She began at Navajo Times during the 18 years that she lived on the Navajo Nation. She served as a correspondent for The Associated Press, covering the Navajo Nation government and federal courts, and as a correspondent for USA Today.
Censored News is published without any ads, grants or revenues.
Article copyright Brenda Norrell, Censored News.
at October 22, 2021

Brenda I appreciate the update from the Nye County Sheriff's Department and they for allowing you to clarify the accident. Myron and LaDonna were 2 people that reached into my heart and gave me hope.