While the US economy sinks thanks to the thieves of Wall Street, the people of El Paso continue to fight against the Border Wall 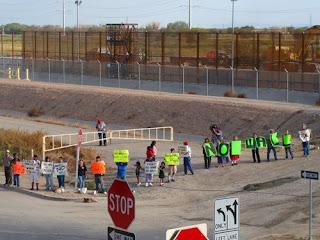 EL PASO, Texas -- While the Bush regime was rewarding 700 billion dollars to the thieves responsible for the financial pillage, we completed another week of daily protests against the border wall. While Bush was giving away taxpayers' money to Wall Street, with the enthusiastic support of both Democrats and Republicans, and of course Obama and McCain, we intensified our acts of opposition against the infamous 7.5 million dollars per mile wall being built by the Kiewit Corporation of Omaha, Nebraska. Kiewit is not only one of the largest recipients of juicy government contracts, but the CEO of Kiewit was also one of the most generous contributors to the Bush/Cheney electoral campaigns. Read article:
http://censored-news.blogspot.com/2008/10/while-bush-regime-pillages-people-march.html
Carlos Marentes is with the Border Agricultural Workers Center in El Paso