By Leonard PeltierSisters, brothers, friends and supporters,
I wish I could sit across the table from each of you right now. We'd share a meal and reflect on changes in this world over these 35 or so years. Yes, I pay attention to things on the outside (as much as possible). I know the world is in turmoil and I ache for the Native people who languish in utter poverty on reservations and in inner cities across America.

As a young man, all I wanted to do was make a positive difference in the People's lives. I'll turn 66 years old next week and I still want that. It's difficult to have an impact in my current circumstances, though. That's a constant source of frustration for me. On the outside, given the chance to roll up my sleeves once again, I suspect I'd still be somewhat frustrated. All that must be done is more than any one person can accomplish. I'd still like the opportunity to do my part.

Thinking back to those days on Pine Ridge, what I remember is the funerals. There were so many funerals... So many families lost loved ones.

There was a powerful force at work on the reservation back then, one with a single purpose: to stamp out the last resistance of the Lakota people.

We (the Oglala traditionals and members of the American Indian Movement) stood up because we were trying to defend our People. It was the right thing to do. We had - have - the right to survive.

The land was being stolen, too - used for mining mostly. No thought was given to the disposal of toxic waste. The rivers were full of poisons. Not much has changed, I hear.

In those days, though, the reservation was torn apart by a tribal dispute and the federal government armed one group against another. The result was a long line of tragedies for the People of Pine Ridge - and for the People who were there that day in June 1975.

I honestly understand the pain and anguish suffered by all concerned and I have been part of that suffering.

I have watched people lie on the witness stand countless times and felt the doors closing on me.

I have heard judges admonish prosecutors for allowing false evidence in and, in some cases, for participating in the falsification itself.

The government hid evidence, too.

Or manufactured it. Literally.

The courts say none of this is even in dispute anymore. So I wonder, if the American standard of justice is still "beyond a reasonable doubt", why am I still here?

I hope that someday someone can put it all on the table and show the enormity of the railroading I have been victimized by.

Last year, as you know, my parole was denied. That was a disappointment, but I am not defeated. My fight for freedom - for my People and myself - is not over. I am a pipe carrier and a Sundancer. Abandoning The Struggle is not - never will be - a consideration.

I am an Indian man and proud of it. I love my People and culture and spiritual beliefs. My enemies like to suggest otherwise and seek to rob me of all dignity. They won't succeed.

When I look back over all the years, I remember all the good people who have stood up for me, for a day or a decade. Of course, many have stayed with me all along the way. I think of the hundreds of thousands of people around the world who have signed petitions for me, too ... people on the poorest of reservations to the highest of political offices.

As we have learned over these many years, my freedom won't come quickly or easily. To succeed, the coming battle will have to be hard fought. Please continue to help my Committee and legal team as you have always done. Your support is more important now than ever before. When freedom comes, it will be due in no small part to the actions you take on my behalf.

Again, thank you for remembering me. You can't know the comfort you bring to an innocent man locked away from the world for so very long.

Photo by Barbara and Peter Clark. Allen at Standing Rock, with Don Cuny of Oglala. They were both at Wounded Knee. A KUNM Volunteer and an A... 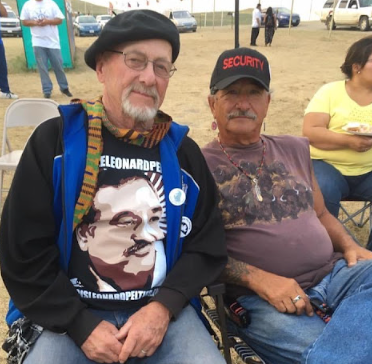