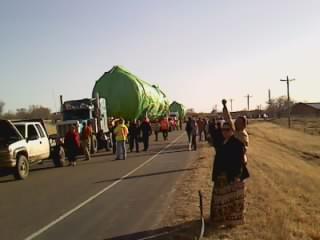 (MARCH 5, 2012) Debra White Plume, released from jail in Kyle, South Dakota, said Monday night, "Alex, myself, Sam Long Black Cat, Andrew Iron Shell and Terrell Eugene Iron Shell were arrested and charged with disorderly conduct."
"We formed a blockade to stop tarsands oil mine equipment from passing our lands. The truckers told us the corporation office from Calgary, Alberta, Canada and the State of South Dakota made a deal to save the truckers $50,000 per truck, there were two trucks, from having to pay $100,000," Debra White Plume told Censored News.
"There were about 50 to 75 people on the blockade at the village of Wanblee in Eagle Nest District on the northern side of the Pine Ridge rez."
Debra White Plume said the trucks were coming from Texas and going to Alberta, Canada to the tarsands oil mine.
"They each carried a 'treater vessel' which is used to separate gas and oil and other elements. Each weighs 229,155 pounds, and is valued at $1,259,593, according to the papers we got from the truck drivers."
"They said their office in Canada made the route with the State of South Dakota to cross the Pine Ridge rez in order to avoid paying the state of South Dakota $50,000 per truck," Debra White Plume said.
"The equipment arrived from South Korea in August. The truck drivers said they did not know they were crossing an Indian reservation and would tell their corporate office that they need to look at another route, because if they cross Indian land again they will probably run into another blockade."
"There were about 75 people on the blockade, people brought pots of soup, frybread, cases of water, doughnuts, soda, and parked their cars to join the blockade. The oldest woman there was Marie Randall, another elder was Renabelle Bad Cob who came in her WHEELCHAIR and participated in the blockade."
"The tribal police took us to jail. Our lawyer Sonny Richards did the paperwork to get us out of jail. The tribal police had to let the trucks get off the rez. They escorted them to the reservation line.
"We oppose the tarsands oil mine in solidarity with Mother Earth and our First Nation allies," Debra White Plume said.
Earlier today, an action alert said: "Calling all Lakota men on the Pine Ridge Reservation to come to Wanblee SD."
The alert said "Pipeline trucks are being held there at the border by our Lakota Oyate, OST Police and State Troopers in an effort to keep them from entering our territory. Even the state troopers told the trucks they have to turn around and cannot bring their pipeline or other materials on to our reservation."
The alert also said "Pipeline trucks are refusing to turn around claiming they have corporate rights that supersedes any other law."
Then, finally, the alert said, "They are getting through. We need people there now!"
Meanwhile, the following article in the Sidney, Montana, newspaper reveals that Totran has the contract with Alberta Tarsands to transport over-sized loads from Houston to Alberta, as it did today, when the State of South Dakota attempted to help Totran sneak the over-sized loads through Lakota land in South Dakota:
http://www.sidneyherald.com/articles/2012/01/31/news/breaking_news/doc4f2841559bbfd188299298.txt

Many are following this on FB...circulating whatever information you can get through...you have many supporters, and many prayers...STAND STRONG! fROM CANADA!

I just post it on my fb wall for my friend to read and see ..stevebo from Bettendorf Iowa

Please say more about this (why they are trying to get through, why they shouldn't be) so when I post it on Facebook, everyone will understand what's going on since no one in the outside news is covering this - Thank you!

Stand strong. What are these trucks transporting and why? Just shows that Transcanada believes the KXL is a done deal.

KXL hasn't even done a thorough environmental assessment. They think they are above our NEPA regulations. American politicians are so corrupt.

Agree with Campbell: You need to explain why these Keystone trucks are passing through your territory.

Did they get permission from somewhere? If so, who? Why do they think they have a right to pass through your territory? A

This whole story is long on indignation and very light on information.

Transcanada has been using "eminent domain" illegally to seize land from tx to SD although the company does NOT have permit to build in the United States. Local governments are being bought off to push this pipeline through without the ppls consent. The pipeline is NOT good in any way for the U.S., or its people it MUST be stopped thank you Lakotas for standing up for your people and all our Mother Earth.
http://stateimpact.npr.org/texas/2012/02/14/this-land-was-your-land-now-its-our-land-keystone-xl-and-eminent-domain/

Rep/ALEC have put in bill to take hostage the strategic oil supply until Americans allow this pipeline
http://thinkprogress.org/romm/2012/02/16/426603/senators-take-emergency-oil-reserve-hostage-to-force-keystone-approval/

Posted to my wall brothers. Stand strong against dirty oil. They didn't want them in Nebraska's Sand Hills either. Nebraska won. We gotta get this on the news.

It's just lovely that South Dakota gave them permission to cross the reservation without consulting the tribe. Hopefully this story will spread through Facebook, Twitter & Tumblr since no one else is covering it.

Anyone who understands what it really is, knows Keystone XL would be an environmental disaster. Even if it created a million permanent jobs (which it won't), that wouldn't justify the pollution generated. All we can do is keep fighting it any way we can.

fortunately, the new york times did publish a news story about the controversy surrounding the pipeline 2 sundays ago.... thank god for the new york times.... maybe they will pick up your story this week.... get in touch with them... they would be glad to hear from you, i bet!!!!! STAY STRONG!!!!
thanks from a displaced western nebraskan.

My thanks to the Dakota people for trying to protect our Mother Earth from corporate interest. They will quite happily destroy the whole earth to add to their profits and it's a small amount of people who will profit. They rule the world, with collusion from, especially American Republican, politicians. You are so brave to make a stand.

To everyone asking for details:

There's a number of reasons why they don't want the trucks passing through but in the end if comes down to this: No one who made the plans to travel through the reservation had the right to do so. The US Government (including the state of South Dakota) has no right to authorizing anything on the reservation land of any native tribes, including Pine Ridge. The tribe says that these trucks cannot pass, based on the agreements the US government made with the sovereign nation that lives there everyone in the United States and Canada has to comply. The state of South Dakota pushing them through is illegal. They're stepping on the rights of these people, this after many instances that the SD government doing similar things to these same people.

So regardless of the reasoning on the part of the tribe, this is ILLEGAL.

My heart is with you, brave souls. I have posted this on FB and several of my friends have shared it. We have had many discussions about the XL project, so many are aware. I will continue to keep you in my thoughts and prayers, and so will many of my friends. My other friends who support the XL pipeline will learn through the discussions, and if not changed at least their thinking will be challenged. For Mother Earth and all her children, I thank you.

HOKA HEY Lakota people, STAND STRONG! I posted this on FB and on my personal page and on our Homeland Security Fighting Terrorism Since 1492 page. We supported the hog farm protests and we support you always. This goes to show and set an example for all our nations we are sovereign and will not surrender our spirit, lands, and destiny. Aho Brenda for keeping the truth heard. Keep us informed and we hope we are there if they try it again!

What's going on now? So the trucks got through the La Kota roads? Who in South Dakota is responsible for letting them through? I am in Chicagoland and I will make calls to protest. This is wrong. The treaties should be respected and if this company is going through your land then they should pay you instead of South Dakota. Please who do I call to protest. Nikki Tam Elmhurst, IL

First of all, I would like to know why these Lakota people were arrested? Disorderly conduct for stopping vehicles that were not permitted to cross the land? The Police Department needs to update their information from the tribe and stop arresting those who have every right to stop these trucks! Come on Pine Ridge PD, get it right!

Posted this on my FB page too - am getting all my Scottish friends to see what is happening there.

My friends, you need to have a long talk with your Tribal Police.

Ask them where they got the idea that tribal members should be arrested for protesting?

And then lean in and ask them quite seriously if they would pepper spray their tribe members in the eyes to obey the orders of a foreign company.

Wait for the answer and if they don't answer, ask again.

Thank God for brave people everywhere standing up, despite years of admissions and empty apologies from the offending criminals, their intrusion upon Native rights does not cease.

Thank you for your courage. I stand in solidarity with you all.

I posted this on my Facebook and Twitter accounts. I'm volunteering with Greenpeace, so I'll try to get the word out with them, as well as with the ACLU and Amnesty. You have support. I certainly don't want the Keystone XL project to continue.

Tonight, across the country at the various Canadian Consulates, there will be Candlelight vigils protesting against the use of tar sands. Not only is this a crme against nature, but a crime against my fellow Native Americans!

I am Kim Moore / Tsilagee OK residing in Nor Cal.

I was wondering if we could get an update please?

There many of us working to support your cause by network sharing your story and information.

You have every right to stop this from coming on your lands. Everyone needs to get this to the new papers in whatever area you are reading this from. We have to help each other as usual to stop the abuses. This is a national story and it should be getting national attention. My the powers be with you all in this effort. Greeting from the Apache lands of the Mimbres Valley of New Mexico.

I will fight with you

I will fight with you and I will die with you..
HVWV

You are all in my thoughts n' prayers. I posted this all over Facebook... the public has a right to know what is happening !

Love and peace to you !

You are all in my thoughts n' prayers. I've posted this all over Facebook to spread the word.

world news
I just found your blog and want to say thank you! What an enjoyable time looking
through so many news feeds. Thanks for sharing

You are all in my thoughts n' prayers. I posted this all over Facebook... the public has a right to know what is happening !

I posted on facebook as well, one of my best friends is Lakota and lives there in South Dakota and I know this would upset him as well.