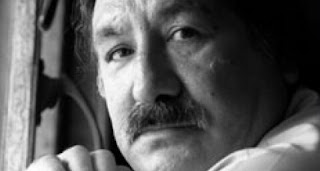 We received a message from Leonard this evening. An excerpt follows.

"For months, if not at least a year now, I have been complaining about medical problems and that something is wrong with me… For the last few days, I have been on call out to go see the doctor. Today, I was called again and had my blood pressure taken and gave more blood for more tests. Apparently, they found what's called Abdominal Aortic Aneurism (AAA) and it is at a very dangerous [stage]. If it bursts I can die. I will bleed to death. So they are going to rush me through some more tests, a MRI on Sunday, then find the right surgeon to do the operation. The good news is [this surgery] has a high success rate… if nothing goes wrong."

At this time, we have no further details. Suffice it to say that, at Leonard's age, any surgery is risky. Also a concern is that during his treatment at a federal prison medical center, Leonard will be held in isolation.

Please visit http://www.bop.gov/inmates/concerns.jsp. Make reference to Leonard Peltier #89637-132 and USP Coleman I. Voice your concern about Leonard's medical treatment, and let the federal Bureau of Prisons know that the world is watching. We demand that Leonard receive the best possible care.

In addition, when you make your call to the White House (as we know you often do) to voice your support for a grant of clemency, please mention Leonard's current health crisis. Mr. Obama must act now.

Leonard and the International Leonard Peltier Defense Committee thank you for your support - in particular during this critical time.

Fish species ranging from endangered Delta Smelt to Striped Bass continued to plummet to record low population levels in 2015, according to the annual fall survey report released on December 18 by the California Department of Fish and Wildlife (CDFW).

Only 6 Delta Smelt, an endangered species that once numbered in the millions and was the most abundant fish in the Sacramento-San Joaquin River Delta, were collected at the index stations in the estuary this fall. The 2015 index (7), a relative number of abundance, “is the lowest in history,” said Sara Finstad, an environmental scientist for the CDFW’s Bay Delta Region.

The Delta Smelt, a 2 to 3 inch fish found only in the San Francisco Bay-Delta Estuary, is an indicator species that demonstrates the health of the Delta, an estuary that has been dramatically impacted by water exports to corporate agribusiness interests and Southern California water agencies during the record drought, along with other factors including increasing water toxicity and invasive species.

The Fall Midwater Trawl Survey, used to index the fall abundance of pelagic (open water) fishes most years since 1967, conducts monthly surveys from September through December. The 2015 sampling season was completed on December 11.

In November, no Delta Smelt were collected - and in December, the only Delta Smelt collected were from index stations in Montezuma Slough and the lower Sacramento River, according to Finstad.

The population of striped bass, a popular gamefish, has also declined to record low levels. The 2015 abundance index (52) is the second lowest in history. Only 42 age 0 striped bass were conducted at the survey stations, noted Finstad.

Likewise, Longfin Smelt, a cousin of the Delta Smelt, declined to the lowest abundance index (4) in the history of the survey. Only 3 longfin smelt were collected at the index stations throughout the three-month period.

The abundance index (806) for Threadfin Shad, an introduced species from the East Coast that provides forage for larger fish, reached its eighth lowest level in survey history. The biologists collected 634 Threadfin Shad at the index stations.

Finally, the 2015 abundance index (79) for American Shad, a relative of the Threadfin Shad that is pursued by anglers on Central Valley rivers every spring, is the lowest in history of the survey. Only 59 American shad were collected at the index stations.

Bill Jennings, Executive Director of the California Sportfishing Protection Alliance (CSPA), said the fall survey shows the “continuing collapse of the estuary caused by the failure of the state and federal regulatory agencies to comply with the law.”

He emphasized that in spite of the continuing record drought conditions, that water exports south of the Delta through the state and federal pumping facilities averaged 7500 cubic feet per second (cfs) over the past week. “The State Water Project pumps are averaging 5154 cfs, while the Central Valley Project Pumps are averaging 2360 cfs,” said Jennings.

As fish populations continue to collapse, the California Department of Water Resources and Bureau of Reclamation are going forward with permit applications to the State Water Resources Control Board to change the point of diversion on the Sacramento River to implement Governor Jerry Brown’s Delta Tunnels Plan, the so-called “California Water Fix.”

Jennings and other public trust advocates point to these latest fish survey results — and the state and federal water agencies’ permit applications to divert more water from the Sacramento River at new diversion points — as just more evidence of the “capture of the regulators by the regulated.”

The current collapse of Delta fish species occurs as part of a long-term decline. The operation of the state and federal water projects by the California Department of Water Resources and Bureau of Reclamation Reclamation has brought fisheries to historic lows.

The natural production of Sacramento winter-run and spring-run Chinook salmon has declined by 98.2 and 99.3%, respectively, and are only at 5.5 and 1.2 percent of doubling levels mandated by the Central Valley Project Improvement Act, California Water Code and California Fish & Game Code. To make matters even worse, over 95 percent of endangered juvenile winter-run Chinook salmon perished in lethally warm water conditions on the upper section of the Sacramento River in 2014 and 2015, due to mismanagement by the state and federal water agencies.
. 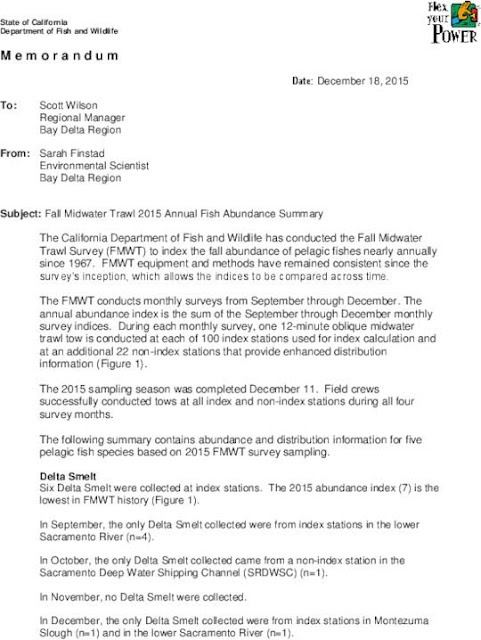