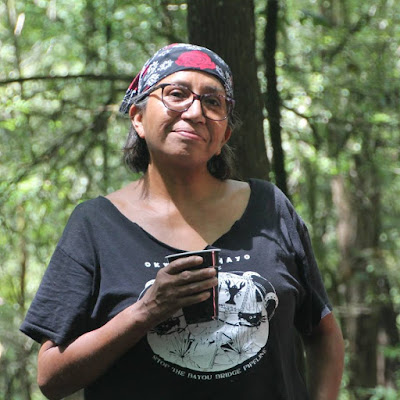 (Oct. 17, 2018) The past 72 hours with our L’eau Est La Vie Crew have been nothing less than equal parts prayer, love, Ohitika, raw courage, and badassednessicity - to say the least. Those Energy Transfer Partners Bayou Bridge pipeline security #%!&@! tried to kill us out there in the Atchafalaya basin y’all, but they don’t understand that the swamp, she loves us more than all the hatred they have for us.
She resisted their hatred for her beloved Water Protectors, who love her so much. She reached her long willow branches out to us while our femme captains made life-saving maneuvers in the violent wake left by ETP’s Bayou Bridge security, her strong branches pulling us to shore as our boats sank into the swamp beneath our feet.
Even the gators with their glowing red eyes and the snakes, who hang over the bayou in the trees and those bigass - and I mean bigass, spiders made room for us. Except the armadillos, there were a lot of those guys who passed by at soon after the sun came up.
It was pitch black in the Atchafalaya when ETP tried to kill us. We deployed around 0:00 dark-thirty, with two national media crews on board, everyone coffeed-up, smudged-up and prayed-up. I had our prayer flags ziplocked and tucked away in my bag as we made our way into the darkness and the most spectacular ride through the swamp ever!! Honestly, I wish y’all were there to witness the magnificent beautiful swamplands that we’re protecting from ETP’s destruction.
At one point, we were the lead boat, I was on the bow of the boat, funky flashlight in hand (because I searched all over camp for a flashlight with batteries with George Clinton and the P-Funk All-Stars’ “Flashlight” in my mind lol) watching for red gator eyes, rougaroux and random branches or logs that might come across our path. The moon was just a sliver and the sky was filled with stars that reflected on the water, which was like glass at times, and an ever so light mist was coming up ahead hanging above the bayou. I had a feeling to bring out our prayer flags, and like they say, always listen to your intuition. So i pulled our prayer flags and waluta out of their waterproof ziplock bag as we moved through the misty bayou, through that powerful spiritual time, that darkness before the dawn, with all of Creation and the spirits of the Atchafalaya, holding the offerings of her Water Protectors for good health, help and protection.
Soon we could see the most obnoxious glow of lights from the Bayou Bridge pipeline construction site. I tucked our prayer flags safely away in my jacket pocket, knowing full well that our Ancestors had our backs.
Media crews were documenting the construction site along the bayou and soon a security patrol boat with a spotlight was coming towards us as we continued our way down the bayou. The ETP security patrol boat created a huge wake as he passed us by and within seconds waves nearly two feet high began crashing down into our boats. Yea y’all, that wreckless hater created life-threatening conditions which i’m sure violate all kinds of maritime law and could have killed a lot of people.
Meanwhile, hats off to our femme Captains who made split-second decisions, and I mean split-second, because we literally had about 3 or 4 seconds with 3-4 bigass waves, and they saved all of our lives out there - omg! I love them!
We’re all safe. No one was hurt. We’re still here to tell the story.
ok, stay tuned for more about how ETP tried to kill us in the Atchafalaya swamplands.
If y’all want to help us recover items we lost, that would be awesome. I, along with most of our crew lost our phones among many thousands of dollars worth of equipment, etc not to mention our camp boats.
I think i’m going to set up a personal gofundme effort. I had to replace my iPhone today which i totally can’t afford aaand I lost a lot of contacts and pretty much everything - except our prayer flags, they were with us the whole time.
#BayousOfResistance
#ProtectWhatYouLove
#StopETP
#NoBayouBridge
#LeauEstLaVie
#WaterIsLife
#MniWiconi