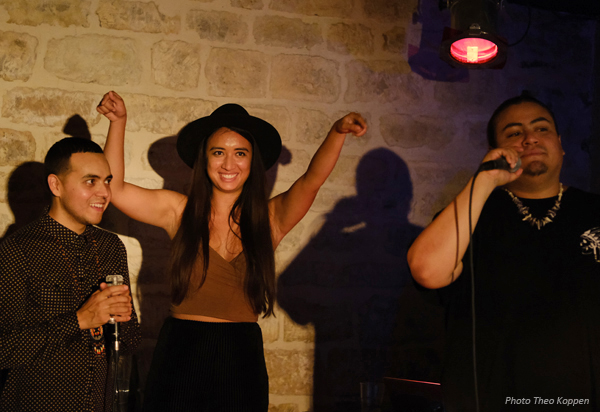 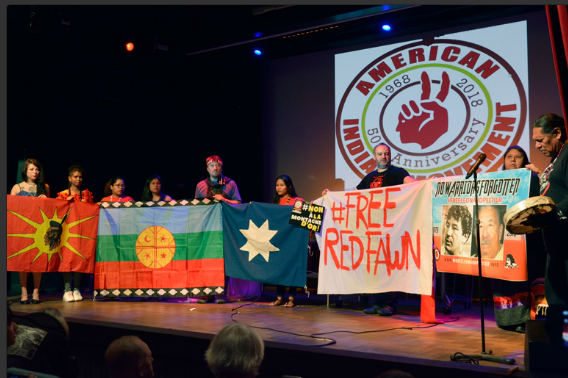 WATER PROTECTORS' 'RESILIENCE TOUR' IN EUROPE: THE STRUGGLE AGAINST PIPELINES GOES ON

By Christine Prat in Paris
Censored News
In French at:
http://www.chrisp.lautre.net/wpblog/?p=4713

Two Water Protectors, who have been fighting and suffering a lot in Standing Rock, Nataanii Means and Tufawon, are now back to Europe for a "Resilience Tour". In Paris, they took part in several events, to celebrate AIM's 50th Anniversary, and CSIA's (Committee in Solidarity with Indians in the Americas) 40th Anniversary.
On October 12th, in the afternoon, a gathering took place to honor the AIM and pay a tribute to the leaders who have passed to the Spirit World, and, in the evening, Raye Zaragoza (Akimel O'odham/Xicana), Nataanii Means and Tufawon had a show.
The evening started with beautiful songs by Raye Zaragoza.
https://player.vimeo.com/video/296193009?quality=720p "
Then, Nataanii and Tufawon started with their hip-hop show. Nataanii presented himself and delivered a speech about the AIM leaders who left us, explained how complicated it was without the Elders, and said that their struggle to protect water is still going, now against the pipeline Line 3 of Enbridge.
https://player.vimeo.com/video/296205497?quality=720p "
Nataanii Means presented himself, saying that he came from three different Nations: Oglala Lakota, Omaha and Dineh (Dineh being often known as Navajos).
Then Nataanii talked about the AIM:
"My father fought for a long time, alongside my auntie and my uncle here, Jimbo and Jean. They all worked together for a long time. Jimbo talked about how our past leaders are past away now, no matter whoever they grouped with. Jean said it too. Everyone they grouped with in the movement, they are gone now.
"I am a product of what they built. One day, I shall be an ancestor to one of my people. So are you. That's why we have to start thinking collectively as conscious people.
"We are fighting another pipeline, in Minnesota." It's called Line 3, and you can look it up on the Internet, at www.stopline3.org. On Facebook, look up Ginew Collective, g, i, n, e, w. [https://www.facebook.com/ginewcollective/] Look that up.
Nataanii said, "But a few weeks ago, me and Tufawon, we just came from that camp. "We're fighting that billionaire company, and I was sitting there, in a meeting, and I looked around, because a question came up. It was a really hard question, and I expected somebody else to answer it. I expected one of my Elders to be there to answer it. But they were not there, there was nobody there. There was us. And that was a new feeling for me, to be there without these people. But that's how life is, you understand that.
"You know, it's hard for me and Rafa [Tufawon] to both be here. You know that, leave those guys behind to do a lot of work.
"So, the least we can do for them is to ask you to go home and look up stopline3.org and Ginew Collective, and share with your circle, donate and spread the word," Nataanii said.
Excerpt from the info page of stopline3, there is much more info on this site – among others, several video interviews of Winona La Duke – thus look it up:
The existing Line 3 is an Enbridge pipeline that ships crude oil from Alberta to Superior, Wisconsin. It spans northern Minnesota, crossing the Leech Lake and Fond du Lac reservations and the l855, 1854, and l842 treaty areas.  And it is a ticking time bomb. It was built with defective steel in l96l, has had numerous ruptures and spills, and is running at half pressure because of severe corrosion.  Instead of cleaning up this liability, Enbridge wants to simply leave it in the ground forever, and cut a brand new energy corridor through our best lakes, wetlands, and wild rice beds, and the heart of Ojibwe treaty territory.  They first proposed this new route for the Sandpiper pipeline in 2013, but years of fierce resistance in Minnesota drove them to cancel that project and buy a share of the Dakota Access pipeline instead. At $7.5 billion, the proposed new Line 3 would be the largest project in Enbridge's history and one of the largest crude oil pipelines in the continent, carrying up to 915,000 barrels per day of one of the dirtiest fuels on earth, tar sands crude. They call it a "replacement" but it is larger, with higher volume, in a new corridor.  First Nations, tribal governments, landowners, environmental groups, and communities across the Great Lakes have been fighting for 5 years now to stop this new corridor and #StopLine3.  We are here to protect the water and our future generations.