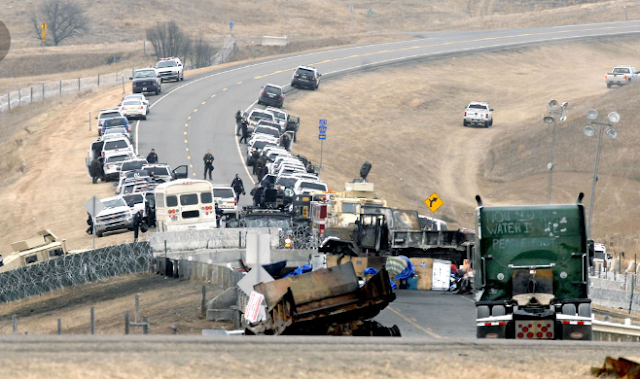 Standing Rock Water Protectors filed a class action civil rights lawsuit against Morton County, North Dakota Governors, TigerSwan, and others, demanding a jury trial.
The lawsuit, Thunderhawk vs. Morton County, was filed by Cissy Thunderhawk, Waste Win Young, and Rev. John Floberg, on behalf of water protectors.
Morton County Sheriff Kyle Kirchmeier, who led the attack on water protectors, is among those named.
The suit focuses on the closure of Highway 1806, which served both the Standing Rock Nation and the water protectors camps during 2016 and 2017.
Residents of Standing Rock and Cheyenne River Nations, and water protectors, who were impacted by the highway closure are asked to join the lawsuit, said Waste Win Young.
The lawsuit describes the attempt to silence lawful free speech rights, and the unlawful closure of the road that was necessary for travel, including medical needs and business access.
The closure of the highway was due to "evil motive or intent," the lawsuit states.
Further TigerSwan, and "John Does" it employed are named in the lawsuit. The technologies used by TigerSwan, both F3AR and NIFE, are stated in the suit.
(Note: TigerSwan, hired as assassins in war regions, worked in North Dakota without a license, in collusion with law enforcement. Regarding the technology identified in the Water Protectors lawsuit, TigerSwan states on its website: "Founded in 2008 by retired members of the United States Delta Force, TigerSwan is a full-spectrum security solution for organizations and businesses ... They achieve these results through their suite of world class methods such as F3AR®, NIFE®, and Guardian Angel.")
The Water Protectors lawsuit states:
. 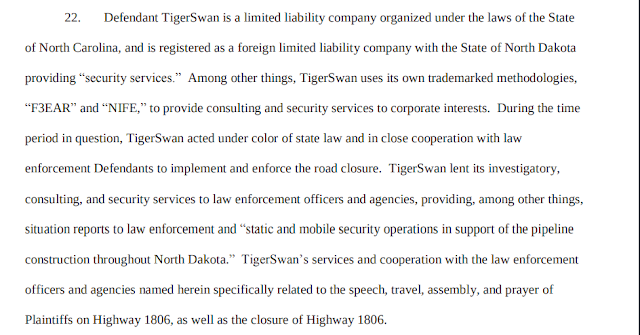 The lawsuit was filed by attorneys at Columbia Law School in New York on Thursday, in federal court in Bismarck, North Dakota.
The lawsuit describes how the closure of the highway impacted local residents, businesses, journalists and all those in need of traveling on Highway 1806.
.

The lawsuit seeks damages, including increased costs, and relief for Water Protectors and those who suffered due to the closure of Highway 1806. 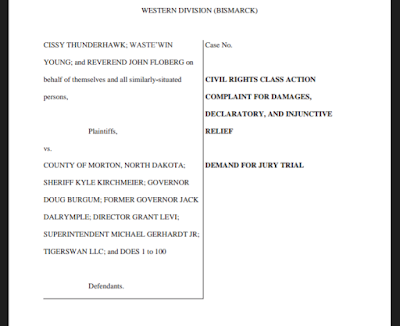 It is still unknown what type of spy equipment that TigerSwan used at Standing Rock. It operated without a license and obviously used spy technology illegally without warrants. It is unknown the role that TigerSwan secret surveillance played in the arrests of Water Protectors at Standing Rock, which are now resulting in imprisonments. -- Censored News

Meanwhile, the North Dakota Regulatory Board continues to pursue a court appeal, fines and exclusion against TigerSwan.
.http://www.ledger-enquirer.com/news/business/article220299380.html

Copyright Brenda Norrell, Censored News, may not be used without permission.
at October 22, 2018 4 comments: 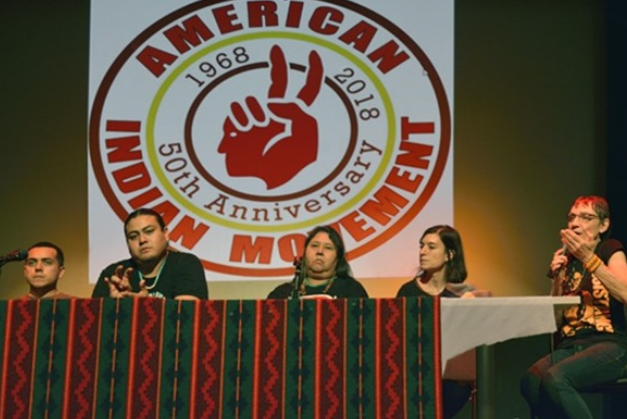 JEAN ROACH, LAKOTA, IN PARIS, TALKS ABOUT THE ROLE OF WOMEN, LEONARD PELTIER AND WATER PROTECTION

The 38th Annual Day of Solidarity with Indigenous Peoples, organized in Paris by the French Committee for Solidarity with Indians of the Americas, CSIA, celebrated over five centuries of struggles against colonialism, the 50th Anniversary of the AIM and the 40th Anniversary of the CSIA.
Jean Roach was one of the speakers representing AIM. She talked about the role of women in the struggle, Wounded Knee, the Protection of Water and Earth, and called for Leonard Peltier's release from prison.
Below is the transcript of the speech she delivered on October 13th, 2018.
Christine Prat

"My name is Jean Roach, I am from the Lakota Nation. I live near the Black Hills, in South Dakota. I'd like to thank everybody for coming and be interested in our fights.
I represent a man, Leonard Peltier, who has been in prison for 43 years, also a part of the colonization process.
When our families are being attacked, whether it was in the 1700's or in the 1970's, the women have to take a stand too. Our children have been adopted out and taken to boarding schools, being killed, murdered. Our men have been taken to prison, or killed, or both. Since the first contact, we have had many casualties.

My Nation is the Miniconjou. My people were massacred at Wounded Knee [December 29th 1890]. Part of the role of the women… So, people try to call us activists or militants, but we are just mothers and grandmothers. We protect our next generations, those are our actions right now, and we probably carry the DNA of our ancestors that were murdered. So, when we talk about Leonard Peltier, we should relate to the fact that his grandfather was one of the Dakota 38 [38 men hanged on Lincoln orders in Mankato, Minnesota, on December 26th, 1862]. To our generations, Leonard represents the United States manipulations. 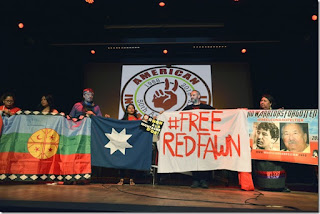 Some people call them political prisoners, but we are just all Water Protectors. At Standing Rock, they were attacked based on their beliefs, our beliefs of protection of the water. And they are political prisoners too.
Leonard Peltier has been a prisoner, as I said, for 43 years. He is the longest held political prisoner in the world. All we are asking for is justice. And the story should be told and not forgotten. We would like the international world to know that we suffer and we still have a prisoner inside the prison. And many more. Until he's free, our Nations are not free.
I have a lot of documentation, on this I am talking about. I urge everybody to take interest in Leonard Peltier. And I congratulate all the water protectors and Earth protectors. Thank you." 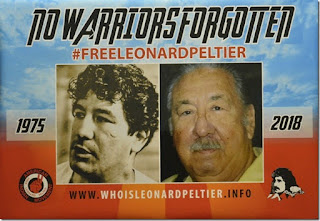