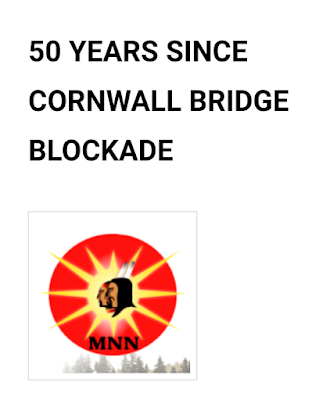 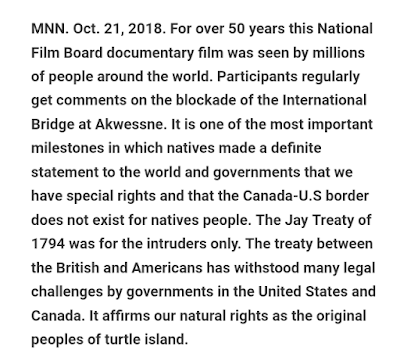 Nataanii Means in Paris -- Solidarity, No Surrender, in Pipeline Defense 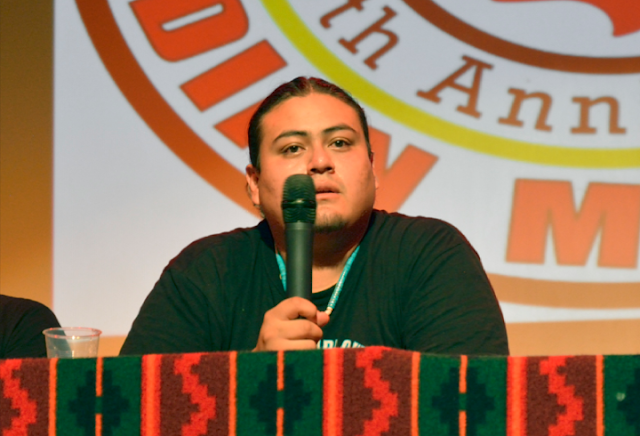 Speech by Nataanii Means in Paris, October 13, 2018, at the 38th Annual Day of Solidarity of the CSIA-nitassinan.
Recorded by Pascal Gregis and Christine Prat from CSIA, transcribed by Christine Prat

Nataanii presented himself in the traditional way and further explained:
http://www.chrisp.lautre.net/wpblog/wp-content/uploads/chr-60767-300x200.jpg
"Hello everyone, this is my greeting, that I am supposed to give whenever I speak. I can present myself in three different languages. I am from three different Nations. I am Oglala Lakota, Dineh – Navajo – and Omaha. For those who know me, I have been coming for the past three or four years. And each time, it seems that I am fighting something different. A lot has changed since two years ago. Two years ago, we were fighting in Standing Rock. This year, now, it's hard to be indigenous, because you have to keep going, you just keep fighting, no matter what. And right now – we have to go through last year, 2017 - and this year we are fighting another pipeline in Minnesota, called Line 3, of Enbridge Corporation.
One of the reasons I am here is because a lot of our Anishinabe relatives stood with me through the seven months at Standing Rock, through the hardships. Because they did that, I feel an obligation to be there with them.

Standing Rock was a great learning experience, not only for myself. Learning about pipelines in themselves, and the tactics used by not only police, but private security firms, and by the states.
Our goal now is to be effective. To be effective to actually delay enough to cost the corporation enough money until the drop the project. And, to me, being effective in that manner is still dangerous, but it is the safest road we can go.
Last year, they finished the pipeline building in Wisconsin and in Northern Canada, down to Middle Canada. There was a group of people called the Makwa Camp, who tried to delay it enough in the winter time, in Wisconsin, to push the pipeline back further.
What you want to understand is that we live in the biggest superpower in the world. The military might of the United States is present all over the world, and it was definitely present at Standing Rock, it showed how they cared about the original people of this land.
So, the state of Minnesota had a year to approve or deny this pipeline, through the PUC committee. They approved it, 5 to 0, totally ignoring the public outcry. So, we went to another meeting where they were voicing what they call environmental safety measures, to the public. We made our presence known to these people who approved these pipelines that directly affect Indigenous people living along their row. They wouldn't look at us in our eyes. We postponed the meeting, we disrupted it enough, made it to the New York Time, the L.A. Times, all over.
You know, on the talks about decolonization, everything they said was right. To practice it is even harder, to live it is even harder. When we are fighting pipelines, we are talking about decolonizing a world that was born into an addiction. We are addicted to oil. We can't go cold turkey. If you have ever seen an addict go cold turkey, it's horrible and that's what we are, addicted. That's what the human race is right now, it's a disease, it's an addiction, it's a virus. That's what we are right now.
I mean, the Earth has been around for 2 billion years, we have been around for what? 20 thousand? We are not vital to this Earth, we are nothing. I mean, you know you guys, because it is why you are here. But it pushes the urge of finding renewable energy, new solutions.
Going to these meetings and to these higher ups and their faces, getting in their faces, showing them that they are not untouchable is important. Because, if I can choose to go home, I don't have a nice place to go home to. I go back where people are addicted to drugs, where kids are committing suicide at the age of ten, where my cousins are selling meth. I go back to where uranium, coal mining, where oil drilling, where fracking is giving us cancers, right now. That's our reality. And there is no vacation, there is no holiday, when you are an original person, an Indian.
So, about this Line 3, to be effective is the motive, because I am tired of cancer, I am tired of drugs coming in, I am tired of my women being sex-trafficked into men camps. And all those things… Specially those missing and murdered Indigenous women, it is a huge factor in those men camps that come in. They sex-traffic our women because of the environment of racism that's happening. These extraction projects are built right next to Indian Reservations. And, what else is around? Just us.
This pipeline is built right through Anishinabe wild rice fields, where they go to collect their food in the summer time, where they recently found a 7000 years old village, a Dakota village.
After DAPL was built, they approved Line 3, they approved LNG gas lines, Canada approved Kinder Morgan Trans Mountain pipeline, and the Keystone XL."
- "And Bayou Bridge!"
- "Bayou Bridge, well, it's a continuation of DAPL and they are fighting that still.
The oil comes from the tarsands, and these tarsands are the most cruel, poisoning, ugliest oil that is. The Bakken oil is bad, the tarsands are worse. And they are trying to increase the tarsands by one quarter of its size, two quarters of its size by now.
So, I don't know what I'll be talking about when I come back next year. Hopefully will it be that we beat Line 3 and Bayou Bridge.
You know, even in my homelands where Bears Ears National Monument is [in Utah], they are trying to open it for exploration for oil drilling and fracking. There is also fracking in Navajo Country, at high rate. It's really overwhelming, because we are on the frontlines, whether we like it or not, choose it to be or not, we have to be on the frontlines.
People forget that there are over 560 Nations in the United States alone. We make up for 0.8% of the population of the United States, as Indigenous people. We are the ones fighting those atrocities. So, that's where YOU come in! Come get arrested now! We encourage our allies, the people with privileged skin in the system, to do what they can to move what they can move, to create noise and to create disruption, as an ally to Indigenous people.
And I thank all of you for being here, for listening, for being in this hot room. So, after we leave here, we shall have to go back to all that. It might sound funny when I say, but it's not funny when we go back home. We're going to keep fighting, doing the best we can, and just going to keep doing it."