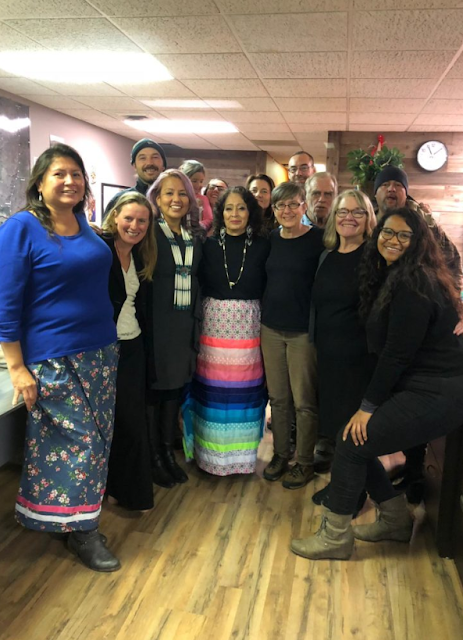 Waste'Win Young (third from left)  with her WPLC defense team, family and friends after the 1st of 2 hearings on her Motion to Dismiss, held on October 5,  2018. 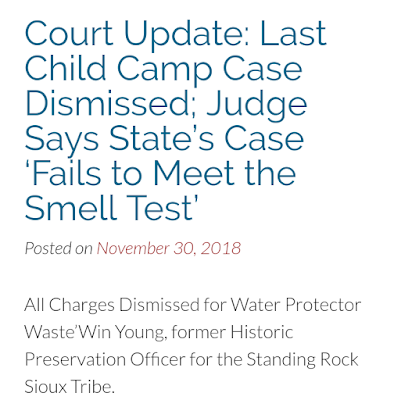 By Water Protector Legal Collective
North Dakota District Judge David Reich today dismissed misdemeanor charges of Criminal Trespass and Engaging in a Riot against Waste'Win Young because the State did not follow the law that requires them to turn over discovery material to defendants. The dismissal came in an Order that responded to a Motion to Dismiss that'd been filed by Young's defense team on October 4, 2018. In it the judge specified the State's "failing to disclose the existence of depositions of its law enforcement officers." In a hearing on the  Motion  held on November 5, 2018, the prosecutor asked that the judge grant a continuance so that the materials could be provided, rather than dismiss the State's case outright.
Stating that he had "no inclination to spend more judicial time and resources on a case which: (1) is nearly two years old; (2) has been twice continued; (3) which has already consumed numerous hours of court time and which has required the defendant and her attorneys to make numerous appearances before the court; and (4) which involves misdemeanor charges against a defendant with no criminal record and who would at most in all likelihood receive a deferred sentence if convicted," Judge Reich dismissed the charges that had been hanging over Young's head since February 1, 2017.
"The judge wrote that the Prosecution's discovery violations here 'fail to pass the smell test for due process and fundamental fairness.' To us, the whole case did," said WPLC Cooperating Attorney, Andrea Carter.
"Ms. Young as well as many Standing Rock members have traversed and accessed that land for their entire lives. There are treaties and laws which recognize their right to do so. It is known as an area containing many sacred and burial sites as well as areas people prayed and collected medicine," Carter added.
"The charges and conduct that was alleged of Ms. Young was baseless," she said. "We believe the depositions that were withheld from the defense by the State would have exposed contradictions of opinion and testimony in law enforcement witnesses as well as the State's close cooperation with private security and other facts that would be unfavorable to the State and exculpatory to the defendants charged that day."
Read Judge Reich's  Order on Motion to Abou
at December 01, 2018 No comments: