SAN FRANCISCO -- Attorneys in the forefront of writing Constitutional laws for the Rights of Nature, and taking the battle to the courtrooms, described the emerging movement upholding the inherent rights of ecosystems.
What will it look like when a forest has its own rights?
During the three-day annual Bioneers Conference, attorneys described the legal battle to honor nature -- the relatives of the people -- and halt the corporate destruction.
The rights of salmon in the northwest, and the rights of Ojibwe wild rice, are in the forefront of the courtrooms to assure life for the Seven Generations.
Among the international laws being relied on to assure the Rights of Nature are those upholding human rights in the Nuremberg Trials. 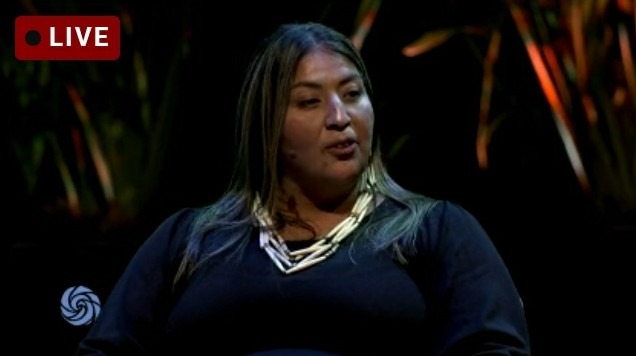 Powerful words and direction
It was in traditional court, where the eldest living clan member, the keeper of the stories, offered the foundation for the problem solver she is today, with a toolkit for Native Nations undertaking the legal battle to uphold the Rights of Nature.
This first-hand knowledge comes from her people, Ho-Chunk, People of the Big Voice.
Ho-Chunk Attorney Samantha Skenandore, Ho-Chunk/Oneida, shared how Ho-Chunk created their Rights of Nature law.
In 2008, Ho-Chunk Nation voted to amend their tribal constitution to enshrine the Rights of Nature. The Ho-Chunk Nation is the first tribal nation in the United States to take this critical step.
Ho-Chunk said in a statement that the amendment establishes that “Ecosystems, natural communities, and species within the Ho-Chunk Nation territory possess inherent, fundamental, and inalienable rights to naturally exist, flourish, regenerate, and evolve.”
Further, it prohibits frac sand mining, fossil fuel extraction, and genetic engineering as violations of the Rights of Nature.
Rekumani (Bill Greendeer), a member of the Ho-Chunk Nation and the Deer clan, proposed the amendment.
“Everything here is sacred. We are all related. We are related to the trees, the birds, the animals, nature herself. We all have a right to exist and thrive. Mother Earth is a sacred soul, and has rights not to be exploited for someone’s profits.”

Ojibwe Manoomin (Wild Rice) Leads the Way in Tribal Court
For Anishinaabe, wild rice is protected by the Treaties. Chippewa have 44 Treaties with the United States.
In Minnesota, Manoomin (wild rice) of the White Earth Band of Ojibwe became the first case brought in a tribal court to enforce the rights of nature, and the first rights of nature case brought to enforce Treaty guarantees."
On August 5, 2021, an action was filed in the Tribal Court of the White Earth Band of Ojibwe in Minnesota, by Manoomin (wild rice), the White Earth Band of Ojibwe, and several tribal members, to stop the State of Minnesota from allowing the Enbridge corporation to use five billion gallons of water for the construction of the oil pipeline known as 'Line 3,' Ojibwe said in a statement.
In December 2018, the business committee of the White Earth Band of Ojibwe adopted a “rights of manoomin” tribal law, which recognized wild rice as having the rights to exist, flourish, regenerate, and evolve, as well as inherent rights to restoration, recovery, and preservation.
During the Bioneers panel, Chippewa Tribal Attorney Frank Bibeau said the state of Minnesota is selling the resources.
"They look at making money, at what they think is theirs," Bibeau said. As confirmed in the Treaties, "Tribal Water Protectors have a right to defend wild rice."
The deer, ducks, fish and rice must be protected as food for the times that are coming.

Bibeau said he believes that fish is the model for the Rights of Nature, the lead barometer, to be upheld in the courts.
"Everyone knows what a fish looks like."
Indigenizing the law
Frustrated with existing environmental law, Attorney Thomas Linzey read about a new legal concept: "What if a tree had standing in court?" What if nature itself was able to come into court. The year was 2006.
It was this concept that gave birth to a movement.
A community northwest of Philadelphia, Penn., created the first Rights of Nature law. Ecosystems were not property anymore, they had rights of their own.
Tamaqua Borough, Pennsylvania was the first community to recognize the Rights of Nature in law. In 2006, Tamaqua Borough banned the dumping of toxic sewage sludge as a violation of the Rights.
Then, Linzey was able to help draft the language for the Rights of Nature in Ecuador in 2008. This is how it began, the Rights of Nature, now in constitutional laws, and in the courts.
Speaking at Bioneers, Linzey, senior legal counsel for the Center for Democratic and Environmental Rights, said that Orange County in Florida was among the first to pass a Rights of Nature law to protect its waterways and wetlands in 2020.
Now, there are new efforts to uphold the Rights of Nature, in Oklahoma for the protection of Tar Creek; in upstate New York, for the protection of St. Lawrence River, and in the Southwest for the protection of Saguaro.
“Rights of nature work is not a spectator sport. It can happen anywhere. It can happen in any community. In the U.S., about half the states have ballot initiative processes, so you can write and propose laws," Linzey said.
Linzey said he relies on Bibeau for direction. Skenandore also pointed out the importance of working with tribal attorneys who live in their communities. 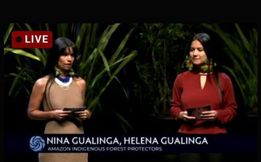 Rights of Nature Upheld in Ecuador's Courts, But Destruction Continues in the Amazon
In Ecuador's Amazon, Indigenous continue to battle the country's current administration and the extractive industries.
At Bioneers on Friday, Nina and Helena Gualinga, Kichwa, said that Chevron had offered what would have been $10 a person.
Working with the Ecuadorian government, Chevron's destruction of the Amazon meant the spirits of the ancestors were blown apart in the trees, children were covered in rashes from the oil spill as far downriver as Peru, and the flooding from climate change, brought by fossil fuel extraction, meant hunger for the Amazon.
Nina and Helena Gulinga described how Chevron tortured the people of the Ecuadorian Rainforest, threatened to rape the children, blew up the forests -- their relatives, and poisoned their river with an oil spill.
Speaking at Bioneers, at the Palace of Fine Arts in San Francisco, they said that now, fifty percent of the crude oil from the Amazon in Ecuador goes to California.
“We can protect the rainforest. But we can only do it if we permit and support the custodianship that Indigenous people already have over our own territories," said Helena Gualinga, Indigenous and Youth Climate Justice Advocate.
About the Rights of Nature Panel

Bioneers: Rights of Nature: From Grassroots to Mainstream

The “Rights of Nature” movement seeks to protect rivers, mountains, and entire ecosystems and the life forms supported within them by recognizing and enshrining their rights in formal legal codes and constitutions.

This legal framework offers a radically different worldview from current legal premises. Instead of being seen as property, nature as a whole and its various components would be formally recognized to have inherent rights to exist, persist, flourish and evolve, and these would be protected under the law.

For over 15 years, the Rights of Nature movement has caught fire across the U.S. and the rest of the world in some of the most and least expected places, from tribal lands to “progressive” cities, coal country, and Latin American nations.

In this session, some of the leading activist attorneys leading the movement in Indian Country and beyond will update us on their successes and the challenges ahead.

Frank Bibeau, an enrolled member of the Minnesota Chippewa Tribe, is an activist and tribal attorney who works extensively on Chippewa treaty and civil rights, sovereignty and water protection, including by serving as Executive Director for the 1855 Treaty Authority, representing the White Earth Band of Ojibwe and Honor the Earth (a Native-led, nonprofit environmental protection group), and litigating to stop Enbridge’s notorious Line 3 crude oil pipeline in Minnesota.

Thomas Alan Linzey, Esq. is Senior Legal Counsel for the Center for Democratic and Environmental Rights (CDER), an organization committed to advancing the legal rights of nature and environmental rights globally. Co-founder of the Community Environmental Legal Defense Fund (CELDF), Linzey is widely recognized as the founder of the contemporary “Community Rights” and “Rights of Nature” movements. He co-founded the Daniel Pennock Democracy School, which has trained over 5,000 lawyers, activists, and municipal officials, and is the author or co-author of several books, including: Be The Change: How to Get What You Want in Your Community; We the People: Stories from the Community Rights Movement in the United States; and the forthcoming Modern American Democracy and Other Fairy Tales.

“Originally published in 1972, Should Trees Have Standing? was a rallying point for the then-burgeoning environmental movement, launching a worldwide debate on the basic nature of legal rights that reached the U.S. Supreme Court. Now, in the thirty-fifth-anniversary edition, Christopher D. Stone updates his original thesis and explores the impact his ideas have had on the courts, the academy, and society as a whole. At the heart of the book is a compelling argument that the environment should be granted legal rights.
https://www.environmentandsociety.org/mml/should-trees-have-standing-law-morality-and-environment

Wild Rice Case Awaits Federal Appeals Court Decision, Grist reports
“I couldn’t figure out how to get authority over them to compel them to do anything we might want to do. And right in my brain, you know, it just clicked,” Bibeau said. “Wild rice is mentioned specifically in the 1837 Treaty. It talks about how we retain the rights to hunt fish and gather wild rice on the lakes and rivers and lands that we’re ceding. Well, that’s huge.”

In a setback for the case in March, the White Earth Ojibwe Appellate Court dismissed the tribe’s own lawsuit. The ruling said that the court does not have jurisdiction over non-tribal member activities on off-reservation land. The case is still awaiting a decision from a Federal appeals court over that exact question.

Since Bibeau first developed Rights of Manoomin, other tribes have used it as a model. In 2019, the Yurok Tribe in Northern California adopted a resolution recognizing the rights of the Klamath River. In Seattle, the Sauk-Suiattle Indian Tribe is suing the city over its hydroelectric dams on behalf of salmon. Bibeau believes that these two cases will be the next step in the growing Indigenous Rights of Nature movement and have the potential to lead to widespread use by tribes across the country.
Read the article at Grist
https://grist.org/indigenous/how-rights-of-nature-and-wild-rice-could-stop-a-pipeline/
Censored News original series from talks and panels at Bioneers
Sikowis and Nick Estes:
The Failed System, Schemes of Non-Profits and a Regenerative Future
https://bsnorrell.blogspot.com/2022/05/sikowis-and-nick-estes-failed-system.html
Sisters in Defense of Amazon Rainforest
Oil Companies Bring Terror to Ecuadorian Amazon
https://bsnorrell.blogspot.com/2022/05/sisters-in-defense-of-amazon-rainforest.html
Rights of Nature Attorneys Describe Emerging Movement in Indian Country
https://bsnorrell.blogspot.com/2022/05/rights-of-nature-attorneys-describe.html
About the author
Brenda Norrell has been a news reporter in Indian Country for 40 years, beginning at the Navajo Times during the 18 years that she lived on the Navajo Nation. She was a stringer for Associated Press and USA Today, covering the Navajo Nation and federal courts. After serving as a longtime staff writer for Indian Country Today, she was censored and fired in 2006. She created Censored News, now a collective of volunteers in its 15th year with 21 million page views. Norrell has a master's degree in international health, focused on water, nutrition and infectious diseases.
Copyright Brenda Norrell, Censored News
at May 15, 2022