Navajo council delegates are among the co-opted players in this roulette of cash, greed and genocide.
By Brenda Norrell
Censored News
April 19, 2022
NAVAJO NATION CAPITOL -- National Sacrifice Zone, the banner reads, outside the Navajo Nation Council, as the Council begins its spring session. The sacrifice zone is the Navajo Nation. The Four Corners region and Black Mesa, and all of the Navajo Nation, have been the United States' sacrifice zone.
Dine' -- and their land, water, and air -- were poisoned by the U.S. government and its corporations, for uranium mining during the Cold War, and coal-fired power plants to produce electricity for distant cities in the Southwest.
Uranium mining, coal mining, coal-fired power plants, fracking, and oil and gas wells, have left behind strewn radioactive debris from uranium mining, scarred land cut and gouged by mining, poisoned water from dumping and runoff, dried up springs from Peabody Coal's mining, and a long genocidal trail of cancer and respiratory disease.
The U.S. Sacrifice Zone continues in the Four Corners region.
Navajo council delegates are among the co-opted players in this roulette of cash, greed and genocide.
"We came all the way from Black Mesa. We just want our council delegates to do their jobs."
That is the voice of Dine' outside the Navajo Nation Council chambers on Monday. On Black Mesa, Dine' said they have no running water, are using outhouses, and their roads are in bad condition.
During the protest outside the Navajo Council on Monday, Dine' urged real solutions to climate change, and a halt to the dependence on fossil fuels, mining and extraction.
Dine' farmers brought this message: "Navajo hemp growers are not criminals or drug dealers. Most were elderly," said one Dine', referring to the Navajo police raid on Dine' hemp farmers.
Navajo elderly were refused entry to the springs session of the Navajo Nation Council today. Dine' protesters opposed new helium mining on the sacred Beautiful Mountain. While Navajos are in need of water and help to haul water, the Navajo Council plans to give a half-million-dollar gift to a private Christian school. Dine' lined up outside the tribal finance building in desperate need of funds. The Navajo government received $2.1 billion in federal virus relief funds from ARPA, but the Navajo government has failed to distribute those. Now, 1,741 Navajos have died of COVID-19. 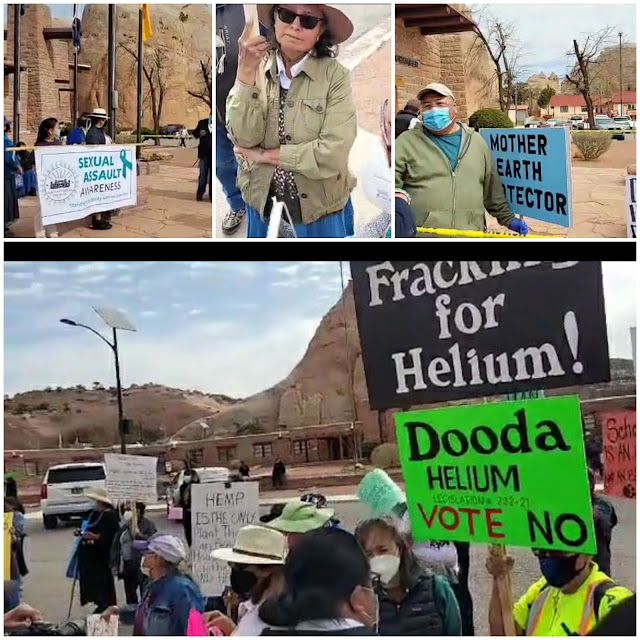 Outside the Navajo Nation Council Chambers in Window Rock, Dine' are opposing new helium mining on sacred Beautiful Mountain at Sanostee.
Dine' are speaking out for real solutions to climate change and voicing urgency for support for sexual assault victims and new efforts in search for missing and murdered Dine'.
“We stand for protecting our precious Mother Earth; we do not want Mother Earth to be destroyed with more pollution from emissions and the potential of destroying the water supply," Dine' organizers of today's march and protest said in a written statement. 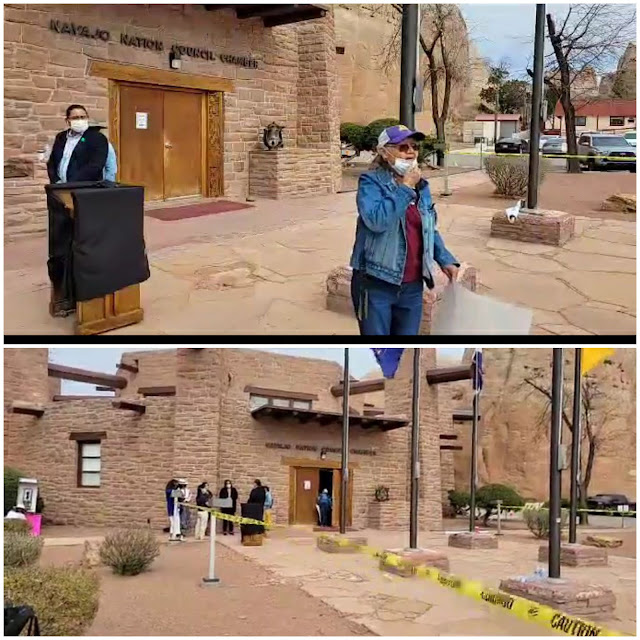 An elderly Dine', shown above, was turned away at the door of the Navajo Nation Council spring session today.
During her live coverage, Dine'/Zuni  reporter Marley Shebala, was also turned away at the Council door, and told she "was not on the list." Shebala has been a reporter in the Navajo capitol for 40 years.
The Council's spring session began today. The agenda includes a half-million-dollar gift to a private Christian school.

(Photo above) Reporting live outside the Navajo Finance building, reporter Marley Shebala shows Dine' lined up in need of assistance.
The Navajo government received the American Rescue Plan Act, federal virus relief funds, nearly a year ago, but has not distributed the $2.1 billion in funds.
Now, 1,741 Dine' have died from the COVID-19. Many Dine' are in need of help hauling water and are not receiving help getting water from the Navajo government.
Navajo Council plans half million for private Christian school
The Navajo Nation Council plans to give a half-million dollars to a private Christian school. It will be discussed this week during the Council's spring session.
Dine'/Zuni Pueblo reporter Marley Shebala questions what Native children are being taught at the school. Shebala writes, "When I attended Rehoboth, I was told that my Dine’ and Zuni ceremonies/prayers were devil worship."
During the pandemic, in August of 2020, the Navajo Council gave $24 million of its federal virus relief funds, from the CARES Act, to its casinos. The Council secretly planned to buy the bankrupt Remington Arms for $300 million during the pandemic, for the second time, in June of 2020, but it was purchased by others for far less.
Now, in April of 2022, reporter Marley Shebala reports on the Navajo Council's plan to fund Rehoboth, east of Gallup, New Mexico. Shebala questions what is the position of Rehoboth on teaching the Dine' traditions and ceremonies.
The spread of the coronavirus has come in waves on the Navajo Nation over the past two years. The coronavirus spread began at gatherings of the Nazarene Christian Church on the Navajo Nation.
Shebala writes: "I attended Rehoboth & I saw how my friends were taught to be ashamed of their parents if they were not Christians or if they were traditional Dine’. Rehoboth was a Christian Boarding School. Why hasn’t the Navajo Council called for an Investigation of Rehoboth, instead of handing over more of our Funds. AND Rehoboth Christian School charges Tuition Fees & Other Fees."
"WHAT IS REHOBOTH'S POSITION ON DINE’ TEACHINGS, CEREMONIES, PRAYERS, ART, MATH, HERBS, SAME-SEX MARRIAGE, DINE’ TRADITIONAL CLOTHING. When I attended Rehoboth, I was told that my Dine’ and Zuni ceremonies/prayers were devil worship," Shebala writes.
Read Shebala's column at:
http://www.dineresourcesandinfocenter.org/why-does-navajo-govt-fund-rehoboth-christian-school-instead-of-calling-for-investigation-of-this-boarding-school-4-14-22/
Below, Navajo Council resolution:

TODAY: Watch Marley Shebala's live coverage, and recorded videos:
https://www.facebook.com/marley.shebala
Screenshots by Censored News from Marley Shebala's video coverage that is underway.
Listen to Dine' voices on the video coverage of reporter Marley Shebala. Navajo elderly and Shebala, Dine'/Zuni Pueblo, a reporter here for 40 years, were denied entry into the Council on Monday by the Navajo Nation Council.
Watch Shebala's video here:
https://www.facebook.com/marley.shebala/videos/511992007145333
About the author
Brenda Norrell has been a news reporter in Indian country for 40 years. She began at the Navajo Times during the 18 years that she lived on the Navajo Nation. She was a correspondent for Associated Press and USA Today, covering the Navajo Nation and federal courts. After serving as a longtime staff reporter for Indian Country Today, she was censored and fired in 2006. Norrell created Censored News to reveal what was being censored in Indian country. She traveled with the Zapatistas and to Bolivia for live coverage. Today Censored News is a collective, with 21 million views. Now in its 15th year, it has no ads, grants, salaries or revenues.
Norrell has a master's degree in international health, focused on water, nutrition and infectious diseases. Since 2006, she has been blacklisted by the media as a news reporter.
Copyright Brenda Norrell, Censored News
Read more at Navajo Times

Navajo Times journalist Rima Krisst reports -- "With $1.07 billion in American Rescue Plan Act funds idle because the Navajo Nation Council and president’s office are divided over how to spend it, members of the Dzil Yijiin Regional Council marched on the first day of spring session Monday to express concern. Marcus Tulley, president of the regional council, said the protest was to demand Navajo Nation leaders to 'do their job' and approve ARPA spending."
“The people that are suffering are the chapter people,” said Tulley. “They need to stop playing games with these funds and sit down together and iron things out.” The Dzil Yijiin region includes Hardrock, Black Mesa, Forest Lake, Pinon, Whippoorwill, Blue Gap and Low Mountain chapters.
Read the article at Navajo Times.
https://navajotimes.com/reznews/leaders-urged-to-do-their-job-allocate-arpa-money/
at April 19, 2022 No comments:

Listen to the audio at MNN

MNN. Apr. 19, 2022. By Thahoketoteh, MNN Correspondent. The solution to this war insanity is the kaianerekowa, the great peace. The indigenous have been continually offering it to the world. This works because it is based on nature. Until the women of the world take their proper place in the consensual decision-making process, there will be no peace. This war between Ukraine and Russia was not called by the women, the mothers of the men and boys who are dying on all sides. According to the kaianerekowa, the mothers decide if there shall be a war. A true war is always about the protection of the land and the people.