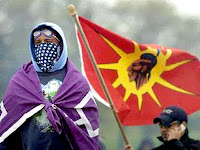 The US Pentagon is seeking to conceal US war crimes, demanding that Wikileaks remove and return data that exposes the truth of the US war in Afghanistan, including US assassination teams. While the Pentagon ignores the US murderers of civilians and reporters, Wikileaks continues to publish the truth, including unauthorized wiretaps.

Currently on Wikileaks are documents exposing the unauthorized wiretaps of at least 12 Mohawks.

"On June 29, 2007 a group of Mohawks from Tyendinaga Mohawk Territory blocked the CN Railway Line running through their territory, the Highway 401, and Highway 2 to protest conditions on Native reserves across Canada and the Government of Canada's sluggishness in resolving outstanding land claims. Blockade spokesman Shawn Brant faces multiple charges stemming from these actions, and the Crown prosecutor is currently seeking a 12 year minimum sentence.

"During the preliminary inquiry to Shawn Brant's trial, it came out that the Ontario Provincial Police, headed by Commissioner Julian Fantino, had been using wiretaps on more than a dozen different Mohawks without a judge's authorization, an action almost unheard of recent history in Canada. Those conversations between Julian Fantino and Shawn Brant were presented as testimony during the pre-trial hearing."

The Mohawk documents are available currently. For those who want copies, files should be downloaded now, due to the current threats by the US Pentagon to take action regarding Wikileaks and whistleblowers. http://wikileaks.org/wiki/Canadian_Mohawk_wiretaps_injuncted_stories_2008

Wikileaks still has more documents to publish. The information that the Pentagon wants removed are the Afghan War Diary and Collateral Murder. http://www.wikileaks.org/
With the risk of censorship, whistleblowers are urged by human rights activists to post more documents on Wikileaks concerning the truth of the US-manufactured border racism, private prison profiteering and environmental genocide toward people of color in the US.

New nuclear power funding under the Obama administration targets black communities in Georgia with the high risk of nuclear power plants. Navajo, Lakota and other American Indians are currently fighting new uranium mining that will poison their underground water supplies. Western Shoshone and Goshute have been targeted with nuclear dumping, while the US is aware that there is no safe method to store nuclear waste.

Globally, Indigenous Peoples' land' are targeted with mining and the legacy of death.

Peabody Coal's orchestration of the so-called Navajo Hopi land dispute resulted in the relocation of more than 14,000 Navajos and decades of misery for Navajo families who continue to resist relocation without support from the Navajo Nation government. The removal of Navajos made way for Peabody coal mines.

Canada is the homebase of the largest number of mining companies responsible for the assassinations of Indigenous activists around the world, from South America to Australia, Africa and Asia, opposing the destruction of their homelands.

On the US/Mexico border, the racism and xenophobia fueled by politicians and the US media has resulted in profiteering for private prison corporations, including CCA (Corrections Corporation of America) and GEO.

In Arizona, Pinal County boasts that private prison profiteer CCA is the largest employer. Arizona is also home of court-documented racial profiling of American Indians at traffic stops and where American Indians and all people of color are imprisoned at rates higher than whites.

With the US militarization of the border region, Indigenous Peoples in their homelands, from California to Texas, are under attack by the US Border Patrol, police and US military, all targeting people of color. The US is criminalizing the right of Indigenous Peoples to travel in their homelands at the southern border, including the Kumeyaay, Cocopah, Tohono O'odham, Yaqui, Apache, Ysleta del Sur and Lipan Apache.

It is known that Boeing violated NAGPRA and other federal laws during border wall construction when the graves of O'odham ancestors were dug up on Tohono O'odham land.

Whistleblowers are asked to expose other violations of federal law and post documents on Wikileaks. These include the destruction of graves, abuse and murder of migrants, theft of Indian country resources (by way of leases or manipulated measurement devices), bribes to elected American Indian tribal officials by polluting corporations and abuse of power by US Border Patrol and police.

The relationship of the US border wall to Israel's Apartheid Wall in Palestine was exposed when Boeing subcontracted Elbit Systems for surveillance at the Arizona border. Elbit is Israel's defense contractor, responsible for the human rights travesty of maintaining security and surveillance on Palestine.

Now, in the pursuit of truth, Wikileaks has defied the US Pentagon and exposed US assassinations and reckless murder. These rogue assassination teams in Afghanistan and Iraq have murdered reporters and large numbers of civilians without consequence.

Hopefully, this act of courage by Wikileaks will have a ripple affect, and cause others to arise with fearlessness.

Hopefully, the US attempt at censorship, and murder without consequence, will backfire.


On June 29, 2007 a group of Mohawks from Tyendinaga Mohawk Territory blocked the CN Railway Line running through their territory, the Highway 401, and Highway 2 to protest conditions on Native reserves across Canada and the Government of Canada's sluggishness in resolving outstanding land claims. Blockade spokesman Shawn Brant faces multiple charges stemming from these actions, and the Crown prosecutor is currently seeking a 12 year minimum sentence.
During the preliminary inquiry to Shawn Brant's trial, it came out that the Ontario Provincial Police, headed by Commissioner Julian Fantino, had been using wiretaps on more than a dozen different Mohawks without a judge's authorization, an action almost unheard of recent history in Canada. Those conversations between Julian Fantino and Shawn Brant were presented as testimony during the pre-trial hearing.
The Crown obtained a publication ban during the preliminary inquiry, which was challenged last week by the Canadian Broadcasting Company after they found out that the O.P.P. had officers posing as cameramen during the Day of Action, a tactic that has recently been condemned by the Ipperwash Inquiry.
The publication ban was lifted by a judge on Thursday, July 17th, 2008. A number of news agencies published initial analysis on the testimony. The next day, July 18th, the Ontario Court of Appeal ordered the publication ban re-instated until an appeal hearing next week.
The attached zip file includes:
- News stories from the CBC (CBC.doc) and Globe and Mail (Globe.doc) covering the testimony after the ban was lifted and before it was re-instated, causing all of these stories to be removed from the internet;
- A video broadcast from CBC News (OPP.mov) covering the story after the ban was lifted and before it was re-instated;
- A media advisory from the Attorney General of Ontario ordering media outlets to cease publication of news relating to the preliminary inquiry evidence and to take information down from all websites;
- An article from the Canadian Press (CP.doc) documenting Shawn Brant's lawyers reaction to the re-instating of the publication ban.
For files:
http://www.wikileaks.ch/wiki/Canadian_Mohawk_wiretaps_injuncted_stories_2008
Hopi Navajo Partitioned Lands horses Mohawks Pentagon Afghanistan Iraq Wikileaks