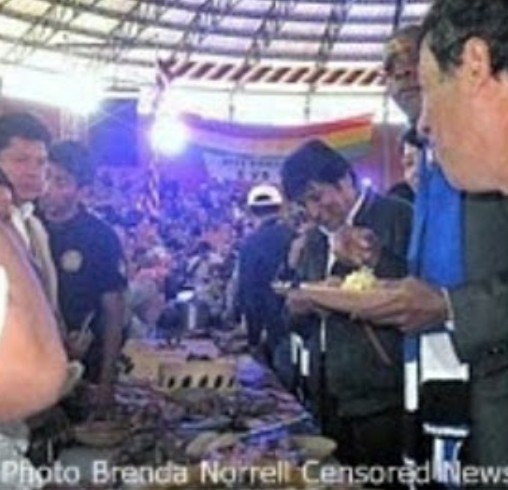 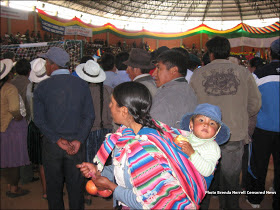 Article and photos by Brenda Norrell
Censored News
http://www.bsnorrell.blogspot.com
.
COLOMI, Bolivia – While the crowds cheered and the band played on, the flags were waving. Fireworks sounded and surely around the world there was a sense that it was a good day to be Indigenous.

Earlier, when the international press jumped on the chartered bus in Cochabamba, we weren’t quite sure where we were going. “Are we going to play soccer with Evo Morales?” We all read those e-mails very quickly. Most of us just remembered something in the e-mail about playing soccer with Bolivian President Evo Morales.

As we drove up the mountains, the World Peoples Conference on Climate Change and the Rights of Mother Earth and the city of Cochabamba gave way to the strikingly beautiful mountains. Time slowed and serenity joined us. When the bus stopped in Colomi, a few dozen international journalists and filmmakers heard the sounds of a band coming from the new gymnasium. We crawled under a barbed wire fence and ran up the hill.

There, Evo Morales was suited up in the number 10 jersey, vendors were selling ice cream and there was a sense that a member of their community had come home. Morales played out the game to cheers. When the game was over between the two Bolivian teams, tables were lined with fresh fish, fava beans, boiled corn, various potatoes and other delicious traditional foods of Bolivia. With the cheering, firecrackers and celebration, the media laughed, celebrated and carried home Bolivian flags.

Today, while others were examining the science of climate change, we watched another remedy for the overconsumption and waste of so-called developed countries. We ate delicious local food on clay plates that was served with love and honor. We joined in the celebration of a people, a people happy to cheer on their first Indian president.

Traveling down the mountain, I thought, that Martin Luther King, Jr., must have been thinking of the mountains of Bolivia when he said that he had been to the mountaintop and he was not afraid to die.

I also thought of all those journalists who have been writing me for encouragement. In recent years, I could offer none. There were no jobs, and perhaps no hope of any. But today there is a new reason to keep writing, even if you pay for it yourself. There is a new reason to keep telling the stories, keep telling the truth, even if no one hires you, even if no one publishes you.

The reason is this: Once in a lifetime we get to go watch Evo Morales play soccer in the mountains of Bolivia.