Breaking News: This weekend, protestors in Winnipeg and Toronto will confront Elizabeth Windsor, aka "Queen of England", with an unanswered letter asking that she identify the fate of aboriginal children under her care: 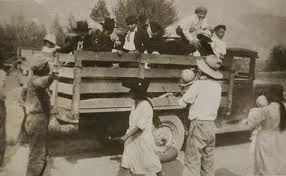 
I am an Interior Salish spirit dancer and am 58 years old. I live in Vancouver, Canada.

I am a survivor of the Kamloops and Mission Indian residential schools, both run by the Roman Catholic church. I suffered terrible tortures there at the hands especially of Brother Murphy, who killed at least two children. I witnessed him throw a child off a three story balcony to her death. He put me on a rack and broke some of my bones, in the Kamloops school basement, after I tried running away.

I also saw him and another priest burying a child in the school orchard one night.

In September 1964 when I was 12 years old, I was an inmate at the Kamloops school and we were visited by the Queen of England and Prince Phillip. I remember it was strange because they came by themselves, no big fanfare or nothing. But I recognized them and the school principal told us it was the Queen and we all got given new clothes and good food for the first time in months the day before she arrived.

The day she got to the school, I was part of a group of kids that went on a picnic with the Queen and her husband and school officials, down to a meadow near Dead Man's Creek. After awhile, I saw the Queen leave that picnic with ten children from the school, and those children never returned. We never heard anything more about them and never saw them again even when we were older. They were all from around there but they all vanished.

The group that disappeared was seven boys and three girls, in age from six to fourteen years old. I don't remember their names, just an occasional first name like Cecilia and there was an Edward.

What happened was also witnessed by my friend George Adolph, who was 11 years old at the time and a student there too.

TUCSON- Arizona's new push for racist laws by the governor and legislators exposes a truth that many want concealed. Not only have white racists taken over control of Arizona lawmaking, but they are now battling to disguise their intentions, and the fact that racism toward people of color thrives in Arizona.

For Indigenous Peoples living in their homelands on the US/Mexico border, the racial profiling is already constant. People of color are already constantly stopped, detained and questioned for no reason by the US Border Patrol and police along the border.

Both the US Border Patrol and police officers along the border act with impunity. They stop, detain and question people without reason. (This even happens to me, a news reporter, when I travel with Tohono O'odham. I am stopped, detained and questioned for no reason.)

The abuse does not stop here. Ofelia Rivas, O'odham human rights activist, has been handcuffed and thrown up against a police vehicle as a Tohono O'odham police officer, a non-Indian, tried to silence her. She has been held at gunpoint by Border Patrol. Other O'odham have been beaten by Border Patrol agents, some in front of their young children.

As for the migrants in the desert, it only takes a look at federal court records in Tucson to see that US Border Patrol agents get away with murder. They shoot and kill people for throwing rocks. They murder people at close range without provocation.

Unless one lives in the border region, and is either a person of color, or spends time with people of color, the truth is not always apparent.

Racism thrives within the US Border Patrol and in police departments along the border, from California to Texas.

The Arizona governor and legislators will not be able to conceal the racism that infests Arizona. Marciopa County Sheriff Joe Arpaio is a living symbol of racism in Arizona, a living symbol that injustice and racism flourish in Arizona law enforcement.

The armed patrols stalking migrants in the desert are another dangerous infestation of racism, one of the many hate groups in Arizona.

Racists in Arizona are always looking for laws and rhetoric to avoid the truth, to put a new spin on their quest for power.

Just as Arizona lawmakers want to put a spin on their racism, the United States conceals the true foundation of its colonization, which was carried out by murderous white immigrants.

U.S. Hate Groups
The Southern Poverty Law Center counted 932 active hate groups in the United States in 2009. Only organizations and their chapters known to be active during 2009 are included.
at July 03, 2010 1 comment: