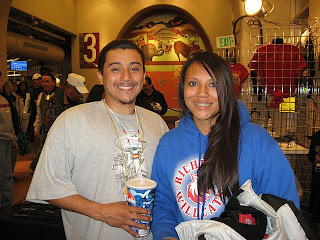 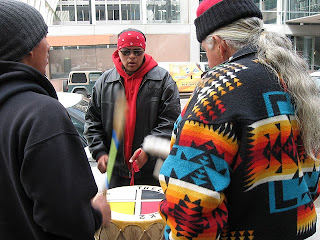 
It has been wonderful to hear from some of the youth walkers from the Longest Walk Northern Route who are considering going on the Longest Walk III Northern Route for Diabetes. There was a group of young Native Americans, ages 17 to 27, that walked across America, with prayer in their hearts. They joined others, some younger and some older, some were Japanese and some were Maori from New Zealand. Together they walked across America for Mother Earth in 2008. Here's a few photos from the road.


Photo 1: Long Walkers Daniel, Miwok, and Kenzie, 17, Navajo, in Denver. Thank you to the Miwok youths for your traditional songs. Photo: 2: Carl "Bad Bear," Paiute-Western Shoshone from Nev., protesting Newmont Gold mining in Denver. Photo 4: In memory of Navajo Ute Willie Lonewolf (center), at Lake Tahoe, Nev. A special thank you to Calvin, on Willie's right, for his Cheyenne-Arapaho songs, and Stella on Willie's left. Also to Marie, far right, for cooking, driving and walking. Photo 5: Harry and Craig, Navajo from Utah and Sanders, Ariz., who made it all the way across America, taking a well deserved rest at that great state park in Penn. Thanks to Bad Bear, Harry, Craig and the others for those 50 and 100-mile run days. Photo 6: Govinda, of Earthcycles Longest Walk Talk Radio, with the gang -- Miguel, Yaqui, Denise, Menominee, and Lisa, Anishinabe -- at the polluted West Virginia border. Lisa, on the far right, was one of the walkers who made it all the way across America. Photo 2 by Brita Brookes. Photos 1, 3, 4, 5 and 6 by Brenda Norrell.


MORE PHOTOS:
Honoring the Long Walkers up Monarch Pass in Colorado, and through Ohio, photos by Joreal Elliott and Brita Brookes:
http://censored-news.blogspot.com/2010/09/more-photos-honoring-native-youth.html
You gotta love these youths, walking thousands of miles across America for Mother Earth, endure all the difficulties, then get up and get ready to do it again!
at September 08, 2010 1 comment:

Indigenous Peoples will join Bolivian President Evo Morales in Cancun to deliver the message from the summit in Cochabamba, Bolivia, held in April, focusing on the protection of the rights of Mother Earth, safeguarding the homelands of Indigenous Peoples and new standards for the reduction of greenhouse emissions. The Cancun summit will be held Nov. 29--Dec. 10, 2010.

Kahentinetha will travel with one other person, according to Haudenosaunee tradition. To sponsor Kahentinetha Horn and her traveling companion, please contact her at: kahentinetha2@yahoo.com

ia Rivas, founder of the O'odham Voice Against the Wall, served as cochair of the important Working Group on Indigenous Peoples at the Bolivia Climate Summit in Cochabamba in April. Ofelia lives on Tohono O'odham land near the US/Mexico border and is a constant voice of human rights as a traditional, ceremonial O'odham. She is one of two women receiving the 2010 Borderlinks Women on the Border Award and advocates for the right of Indigenous Peoples to travel in their own territories without harassment. She is a supporter of the Zapatistas and the struggle for autonomy and dignity in Mexico. (Photo Ofelia Rivas, center, at Bolivia Climate Summit by Ben Powless, Mohawk.) To sponsor, e-mail contact via brendanorrell@gmail.com Cochabamba: Declaration on the Rights of Indigenous Peoples http://pwccc.wordpress.com/2010/04/30/final-conclusions-working-group-n%c2%ba7-indigenous-peoples

jo scholar and human rights activist, is currently a Fulbright scholar in New Zealand, learning about Maori traditions. Ofelia Rivas, O'odham, made a special request for sponsorship for Michelle, to assist Ofelia with the work in Cancun. Michelle focuses on Indigenous cultures and women's studies. Michelle attended the Bolivia Climate Summit in April, making the difficult journey from Auckland, New Zealand, to Cochabamba, Bolivia, on flights touching down across South America. While a student at the University of Arizona in Tucson, she was a voice for youth and women in the border struggle and supported the Zapatistas struggle for autonomy and dignity. Michelle urges Indigenous Peoples to work together in unity to obtain their goals. Her maternal grandparents live the traditional way of life on the Navajo Nation, living the Beauty Way. (Photo: Michelle Cook, left, at Bolivia Climate Summit.) To sponsor, e-mail Michelle Cook at: cookmichelle7@gmail.com

endent Media:
Along with the Indigenous grassroots delegation, Earthcycles grassroots radio producer, http://www.earthcycles.net/, Govinda, and Censored News publisher Brenda Norrell, http://www.bsnorrell.blogspot.com/ seek sponsors to provide independent online radio and print media coverage of the Cancun Climate Summit. (Photo: Govinda in his solar-powered radio bus, at the end of the 5-month Longest Walk Talk Radio across America in 2008. Photo by Lenny Foster in DC.) Contact Govinda at: govinda@earthcycles.net or brendanorrell@gmail.com
Round trip airfare from Tucson to Cancun is $400, and $500 from Montreal, depending on the date of purchase. Hostel and food costs will be at about $500 for each person for 12 days. Michelle Cook's airline ticket from New Zealand to Cancun roundtrip is $1,800.
The high costs in Cancun, a tourist city, add to the difficulty of grassroots Indigenous Peoples attending.
A special thank you to the sponsors of the Indigenous grassroots delegation to the Bolivia Climate Summit.
The Cancun Climate Summit, Nov 29 - 10 Dec 10, 2010, is the COP 16 & CMP 6 (UNFCCC) 16th Conference of the Parties (COP 16)/ 6th Conference of the Parties serving as the meeting of the Parties to the Kyoto Protocol (CMP 6.)
.
Bolivia Peoples Agreement conclusions incorporated into United Nations Climate Change document
Press statement from Bolivian government
BONN, Germany -- After a week of negotiations, the main conclusions of the World Peoples Conference on Climate Change and the Right of Mother Earth (Cochabamba, April 2010) have been incorporated in the document of United Nations on Climate Change, that now have been recognized as a negotiation text for the 192 countries which has been congregated in Bonn, Germany, during the first week august of 2010.
The most important points that have been incorporated for its consideration in the next round of negotiation before Cancun, that will take place in China, are:
· 50 % reduction of greenhouse gasses emission by developed countries for second period of commitments from the Kyoto Protocol years 2013 to 2017.
· Stabilize the rise of temperature to 1 C and 300 parts for million of carbon dioxide in the atmosphere.
· To guarantee an equitable distribution of atmospheric space, taking into account the climate debt of emissions by developed countries for developing countries.
· Full respect for the Human Rights and the inherent rights of indigenous peoples, women, children and migrants.
· Full recognition to the United Nations Declaration on of Indigenous Peoples Rights.
· Recognition and defense of the rights of Mother Earth to ensure harmony with nature.
· Guarantee the fulfillment of the commitments from the developed countries though the building of an International Court of Climate Justice.
· Rejection to the new mechanisms of carbon markets that transfer the responsibility of the reduction in emissions of greenhouse gases from developed countries to developing countries.
· Promotion of measures that change the consumption patterns of the developed countries.
· Adoption of necessary measures in all relevant forums to be excluded from the protection of the intellectual property rights to technologies and ecologically sustainable useful to mitigate climate change.
· Developed countries will allocate 6% of their national gross product to actions relatives to Climate Change.
· Integrated management of forest, to mitigation and adaptation, without market mechanics and ensuring the full participation of indigenous peoples and local communities.
· Prohibition the conversion of natural forest for plantations, since the monoculture plantations are not forest, instead should encourage the protection and conservation of natural forests.
at September 08, 2010 No comments:

MNN EDITOR ARRESTED FOR 'ASSAULTING' CANADA BORDER COMMANDOS - TRIAL PENDING
MNN Sept. 7, 2010.
On July 19, 2010 the police of the town next to the Mohawk community of Kahnawake arrested Kahentinetha Horn, the 70 year old editor of MNN Mohawk Nation News. She was unaware that two cross-Canada warrants for unspecified charges were issued by the Akwesasne Mohawk Police on behalf of the Canada Border Services Agency CBSA.
Kahentinetha was ordered into the back seat of the police car. They made arrangements to transport her out of Quebec to parts unknown to her! She was not allowed to phone her family.
The 90 degree F heat wave turned the police car into an oven. The windows were tightly shut. Kahentinetha started to suffer heart palpitations, shortness of breath and sweats. She banged on the windows, coughing for air, as she waved her nitro emergency heart attack spray at the two officers.
Two years previously on June 14, 2008, she had been assaulted by CBSA at Akwesasne near Cornwall Ontario. This caused a trauma induced heart attack. Since then she has not left her home and continues to receive medical care.
Kahentinetha asked the Chateauguay police to call an ambulance immediately. She was taken to nearby Anna Laberge Hospital where she remained for 2 days. The police called the Akwesasne Mohawk Police, who told them to release her and for her to call them from home. She called the Akwesasne Mohawk Police.
Jeff Bova and John Cook refused to tell her the nature of the charges and to go to Akwesasne to find out. A lawyer made some calls. She apparently was charged with assault and obstruction of the CBSA on June 14, 2008, the day she was assaulted by about a dozen special CBSA commandos. They were wearing flak jackets, leather gloves, steel reinforced boots and various weaponry hung around their waist.

After roughing her up and cuffing her, two commandos applied the “stress hold”. The cuffs on her arms behind her back were tightened to stop blood circulation to her arms and chest. Then her head was pushed forward and downward to cause blood to rush into her heart, which could cause instant death. Her brother’s sudden appearance at the checkpoint saved her life. The lawyer said they intend to proceed to a trial on the charges and asked for their evidence.

Kahentinetha, MNN Mohawk Nation News
Kahentinetha2@yahoo.com For more news, books, to donate and to sign up for MNN newsletters go to www.mohawknationnews.com Other articles in category “Border”.