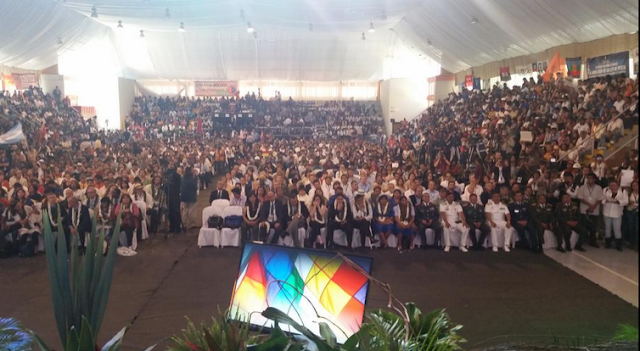 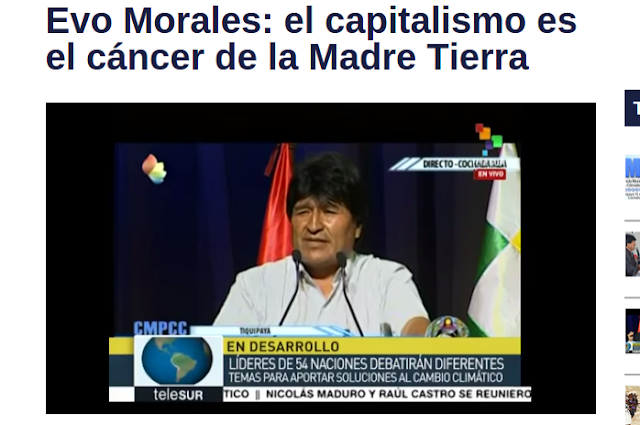 Welcoming those arriving from five continents, Bolivia President Evo Morales said climate change did not come from the south, and capitalism is like a cancer to Mother Earth. President Morales said the declaration from this conference with be presented to Paris COP 21.
Watch opening statement today (Espanol)
http://www.telesurtv.net/news/Evo-el-capitalismo-es-el-cancer-de-la-Madre-Tierra-20151010-0023.html

TeleSur reports: Bolivia is hosting the second People’s Climate Change Conference Tiquipaya II this weekend, and President Evo Morales says the country will push for far-reaching measures to tackle the problem. Representatives of more than 40 countries will discuss the greenhouse gas effect, the hot topic of the conference. Environmental activists are calling on developed countries to pay their climate debt and realize that developing nations must also take steps to defend Mother Earth. Bolivia, for example, wants to stop deforestation, but recognizes that it must also improve its own record. 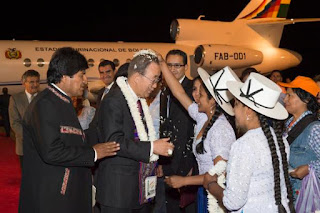 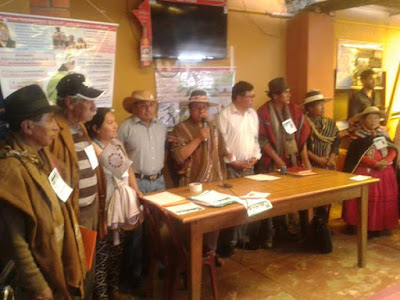 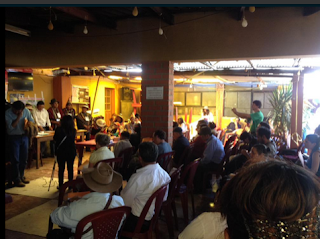 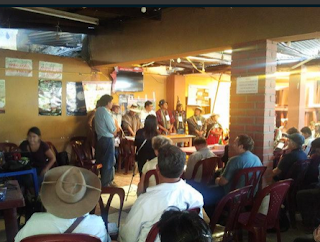 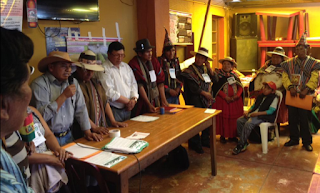 COCHABAMBA, Bolivia -- The Indians of the Guarani People's Assembly (APG), the Indigenous Territory Isiboro Secure National Park (TIPNIS) of Takovo Mora, Conamaq and other organizations, and environmental activists opened a parallel event to the Second People's Conference on Climate Change.
The purpose is to report the "contradictions of the government's environmental policies and report their extractive industries and intensive exploitation of natural resources," the groups said.
The problems of indigenous victims of enslavement of its territory because of the oil and gas activity will be addressed, the representative of Cochabamba Environmental Forum (Focomade) Johnn Zambrana said.Members of the Coordination of Peasant Organizations of Economic Integration of Cochabamba (Ciocec) will debate the issue of food security and the use of GMOs. The coca growers of Yungas of Vandiola denounce the elimination of the traditional areas where coca organic still is.It is an autonomous space to denounce the current extractive policies, destructive and genocidal nature of indigenous peoples and local communities.The table 18 is self-managed. It not affected by the government or political parties, sects, churches or non-governmental organizations (NGOs). The conclusions of the meeting will be disseminated in a public statement, Zambrana said.He added that participants seek to achieve its thematic impact in the II Conference through some delegates.The event runs from today until tomorrow in Tiquipaya, in Chicharroneria Doña Eva, close to Khora supplier.

As the World Bank increases its spending on fossil fuels, the French Chair of the Paris Climate Conference COP 21, who is now in Cochabamba, met with World Bank and International Monetary Fund in Peru before traveling to Cochabamba
http://www.diplomatie.gouv.fr/en/french-foreign-policy/climate/events/article/climate-americas-visit-by-laurent-fabius-to-peru-and-bolivia-09-10-10-15
Laurent Fabius, who will chair the Paris Climate Conference, will attend a conference in Lima on October 9, together with Michel Sapin, on climate financing during the Annual Meetings of the World Bank and the International Monetary Fund. He will notably be accompanied by Annick Girardin, Minister of State for Development and Francophony.
He will notably meet with President Ollanta Humala, Peruvian Minister for the Environment Manuel Pulgar-Vidal, COP20 President, Ban Ki-moon, UN Secretary-General, and Jim Yong Kim, President of the World Bank. He will hold a joint press conference together with Michel Sapin.
On October 10 in Cochabamba in Bolivia, the minister will attend the “Peoples Summit on Climate Change and the Defense of Life,” during which he will take part in a debate on climate disruption with civil society representatives. Laurent Fabius will work on preparing for the Paris Climate Conference and on strengthening our bilateral relations together with President Evo Morales and David Choquehuanca, Bolivian Minister of Foreign Affairs.
at October 10, 2015 No comments: