Video: Yaqui Water: The Right and the Resistance 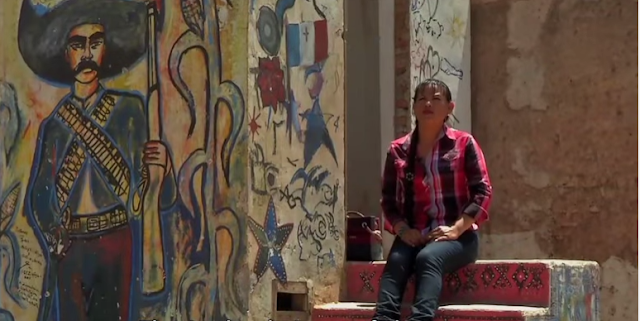 
Oct. 8, 2015 -- Censored News celebrates the release of our brothers, Vicam Yaqui Spokesmen Mario Luna and Fernando Jimenez from prison. They were falsely imprisoned for one year in Sonora, Mexico.
In an interview with Luna, La Jornado reports what happened to him in prison. Luna describes his work counseling others.
On leaving the prison, he said, “Right now, I urgently need to go to see the community, to involve myself in the work of defending our water, to bring myself up to date on the legal fight, to be with my family,”

Happy, with his two daughters in his arms and surrounded by Yaqui tribal authorities, Mario Luna passed through the prison for the last time on the afternoon of September 23. As he left, he emphasized, “strong, convinced that I should never have trod the floors of the jail, strengthened in my convictions, and bound always to the tribe´s fight against the Independence Aqueduct." Read article: https://dorsetchiapassolidarity.wordpress.com/tag/yaqui/
The video above explains the right of Yaqui in Sonora to 50 percent of Rio Yaqui, the Yaqui River, water now being stolen by the Independence Aqueduct for the City of Hermosillo.
Vicam Yaqui maintained the long running highway barricade on the busy coastal route, a major trucking route, through their community to demand their water rights and to halt the theft of their water. 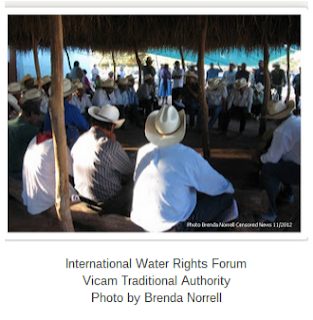 Censored News was there, and was the only media from the United States present, during the first consultation on water rights at the International Water Forum in Vicam Yaqui Pueblo before the barricade began.
The National Indigenous Congress and Zapatistas support Vicam Yaqui in their struggle.

Video by TeleSur
Published on May 19, 2015
In-depth reports and analysis from our extensive network of correspondents throughout the region on the most important developments in Latin America.
Since before the Spanish colonization, the Yaqui indigenous tribe has inhabited the arid part of northern Mexico in the state of Sonora near the Yaqui River. For centuries, the tribe has defended its territory, autonomy, self-determination and identity. The Yaquis are a nation with their own laws, internal rules, cultural identity, land and river. For centuries they have depended on the Yaqui River for survival. In 2010, however, the Sonora state government began construction on a 172 km megaproject known as the Independence Aqueduct to supply the city of Hermosillo and agro-industrial enterprises with water from the Yaqui River. The project openly violates a 1940 decree by former President Lazaro Cardenas, which guarantees that at least 50 % of the water belongs to the Yaquis. In 2013, the Supreme Court ruled in favor of the tribe, declaring the state’s environmental impact study void and ordering an injunction for the suspension of the aqueduct. Sonora state authorities, however, have ignored the ruling and last September arrested Yaqui spokesmen Mario Luna and Fernando Jimenez in what the tribe considers an attempt to intimidate them and dissuade them from resisting the aqueduct and fighting for their constitutional rights. teleSUR
at October 08, 2015