ALBUQUERQUE -- The people came from many patches of Turtle Island. There were Comanches, Apaches, Pueblo, Dine (Navajo), and members of many more nations.  Hundreds strong the people marched, some attired in traditional dress and pounding drums.  As the sounds of flute rose above the din of early evening traffic, the crowd surged through downtown Albuquerque and expanded upon an old protest chant:

"Whose streets? Our streets! Whose land? Our land! Whose water? Our water!"

Organized by  The Red Nation activist organization and allies from a host of other groups, the spirited event constituted a victory celebration held only five days after the Albuquerque City Council proclaimed October 12 as IPD. But it was also a strong protest against border town violence against Native Americans, corporate pollution of Native lands and attacks on treaty rights.

Speaking to the rally held in Civic Plaza after the march, University of New Mexico Kiva Club member Jennifer Marley perhaps summed-up the prevailing sentiment of a crisp fall evening for the history books: "This is what decolonization looks like!"

Banners and placards carried by the marchers reflected the themes: "Stop Racist Violence against Natives." "Uphold Treaty Rights for All Natives." "Happy Indigenous Peoples Day." "Abolish All Native Mascots." Bouncing off downtown buildings, a chorus of voices thundered, "Up, up with the people, down, down with Columbus!'"

At one point, the march halted in front of the headquarters of the Albuquerque Police Department (APD). Climbing atop the steps at the headquarters' entrance, David Correia, University of New Mexico professor and anti-police violence activist, noted that the demonstration was the biggest one outside the police station since the protest immediately after the APD's killing of homeless camper James Boyd in March 2014.

Correia told the large group that the U.S. Department of Justice, which entered into an agreement last year with the City of Albuquerque and APD for policing reforms after a four-year spate of police shootings, did not examine police interactions with the city's large Native American population.

"Police violence against Native people in this town is a secret nobody talks about, so we're going to talk about it tonight," Correia said.

According to the researcher, an ABQ Justice survey of homeless people last year garnered multiple testimonies from Native Americans, including stories about beatings at the hands of police.
"Every single Native homeless man or woman we talked to has been harassed by the cops," Correia said. "No agency has ever investigated that pattern I've just described…we're the only ones who care and can do something about it."

Correia quoted testimonies by Native Americans surveyed who claimed APD officers employed language such as "ugly Indian," or told people in the streets to "go back to the reservation."

Near the edge of the Civic Plaza, the march stopped to hear words in support of the Palestinian struggle.

Filing into Civic Plaza for a rally, the people were in an exuberant mood. Entire families showed up for the big night, from grandmothers to grandchildren, while seasoned activists stood alongside younger activists who weren't even born during the last intense period of Native American activism in the 1970s.

Decorating Civic Plaza, a "wanted poster" informed that Geronimo is looking for the U.S. Congress, the U.S. President and leaders of tribal governments for assorted violations of treaty and constitutional law.

Garduno's role in the IPD proclamation is apparently not a settled matter in the Albuquerque City Council. Republican Councilman Dan Lewis, who was among  three of nine councilors not signing on to the measure, was quoted in local media outlets October 12 vowing to introduced a motion of censure against Garduno at the council's upcoming meeting on Monday, October 19.

Albuquerque media outlet KOB quoted Lewis as objecting to Garduno's procedural methods in getting the proclamation passed, as well as the retiring council president's style in general.

On the other hand, IPD marcher Dinah Vargas, told FNS she was "really glad to have an indigenous day," but remained "disappointed" by the three councilors who did not sign the October 7 proclamation. The absence of the signatures of Lewis and two fellow councilors, Vargas said, was another example that "we don't have a government that represents everyone."

Comanche La Donna Harris, founder of Americans for Indian Opportunity and the 1980 vice-presidential candidate for the old Citizens Party, took to the stage of Albuquerque IPD. The youthful octogenarian with a broad smile had a simple message for the night. "Standing together like this is a wonderful good day for indigenous people," she said, to a round of hearty applause.

Longtime African-American civil rights leader Jewell Hall recounted her family's  history of slavery, her questioning about Columbus as a young school girl and her long experience as a teacher, union president and school board president in New Mexico.  "I witnessed the deliberate destruction of indigenous peoples' and African American peoples' identities," she told the crowd.

Yazzie also called on the Roman Catholic Church to revoke the Doctrine of Discovery, an edict promulgated by the Vatican in the 15th century that paved the way for the colonization of the Americas.

Lynnnette Haozous, a young Apache woman from San Carlos, Arizona, spoke about her group's efforts to protect the Oak Flat sacred site from the copper-mining plans of an Australian-owned energy resource extraction giant.

In addition to defiling sacred land, a mine would jeopardize groundwater supplies, Haozous said.  She pointed to recent spill of toxic sludge from an old abandoned  gold mine into the Animas River in the Four Corners Area as a cogent warning.

"We saw what happened in Animas when corporate people aren't held accountable, and we don't want that to happen to Oak Flat," Haozous said.

As the rally unfolded chalked messages appeared on the ground of the Civic Plaza. A few of the mysterious writings referred to water and Columbus Day, but many addressed violence against Native American women.  Among them were the following: "APD rapes native women," "Justice (for) missing and murdered and raped Native women and girls" and "Native women and girls are trafficked through our city."

Gender violence against Native women is a mounting issue across the Americas including in Guatemala, where the systematic rape of indigenous women by government soldiers during the country's 1960-1996 civil war is getting increasing exposure, and Canada, where the murders and disappearances of hundreds of Native women is becoming a national scandal for the Harper government.

Of very significant note, the October 12 IPD march/rally could signal the mass revival of a campaign to free American Indian Movement (AIM) activist Leonard Peltier. Imprisoned since 1976 for the murder of two FBI agents, Jack Coler and Ronald Williams, on South Dakota's Pine Ridge Lakota reservation, Peltier was named the grand marshal of the Albuquerque event by organizers.

Chanted by hundreds was the demand, "Clemency Now!"

Supporters contend Peltier was framed for killings that happened during a June 1975 firefight in which 18-year-old AIM member Joe Stuntz was also killed; no one has ever been charged with Stuntz's murder. Other earlier defendants in the case were acquitted by juries.

The Pine Ridge violence occurred amid what might be described as the still-murky U.S. Dirty War of the 1960s and 1970s.

Along with civil rights, Black liberation, anti-war, Chicano and Puerto Rican movements, AIM was the target of the FBI's COINTELPRPO program and similar plots by other law enforcement and intelligence agencies.

The Dirty War tactics, documented by Congressional hearings and Freedom of Information Act releases to journalists and citizens, included massive spying and dossier compiling, infiltration of informants and provocateurs, jailings, sexual violence, proven and suspected cases of murder, and the construction of "snitch jackets" in an effort to discredit effective movement leaders.

During the time COINTELPRO and its cousins were active, Washington sponsored or supported various dirty wars waged by Latin American militaries against their own populations.  If the state of Guerrero might be said to have been the epicenter of the Mexican Dirty War, in some ways Pine Ridge could rank as the U.S. equivalent.

In resistance to local repression and land theft, AIM conducted a 1973 armed occupation of the Pine Ridge hamlet of Wounded Knee, site of the Seventh Cavalry's massacre of hundreds of Lakota men, women and children in 1890.

A virtual state of war reigned in Pine Ridge between 1973 and 1976, with dozens of slayings, mostly of traditional Lakota and AIM supporters.

It was in these circumstances that the June 1975 firefight occurred.

"If we can't free Leonard Peltier, there is no American who isn't wealthy who has a chance of exercising his constitutional rights," Peltier supporter David Hill told IPD marchers. "He did not get a trial, he got a railroad." Hill compared Peltier, who has remained true to his cause throughout decades of imprisonment, to the great Lakota war chief Crazy Horse. "100 years from now people will be saying in the spirit of Leonard Peltier."

The movement for an executive clemency for Leonard Peltier could be one of the last great decisions of U.S. President Barack Obama.

While Peltier's campaign gathers steam, supporters of slain FBI agents Coler and Williams are likely to redouble their own lobbying efforts to keep an AIM activist whom they contend was responsible for execution-style murders behind bars for the rest of his life. Either way, Obama's decision is likely to go down in the history books as among the most controversial of his presidency.

Sam Gardipe, 59-year-old co-founder of the Red Nation, was a teenager when Wounded Knee 2, as it became known, erupted and seized the imagination of a generation of young Natives. He recalled going to a 1973 march in Albuquerque that supported an occupation which created pride in the Native American community.

In his assessment of October 12 IPD in Albuquerque, Gardipe sounded pleased. "The new generation has come up and taken up the cause, and that makes me feel good, "Gardipe told FNS. "I feel really great. We haven't seen this kind of Native movement in 30 or 40 years. I'm hoping this is just the beginning and things will change for the better."

To Unsubscribe or Manage Your Membership
https://mailman.nmsu.edu/mailman/listinfo/fns_nmsu-l
at October 15, 2015 No comments: 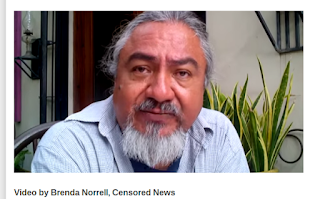 Video by Brenda Norrell, Censored News
HERMOSILLO, Sonora, Mexico -- Alejandro Aguilar Zeleny describes a seminar held by Mexico's anthropologists in Hermosillo, Mexico, Oct. 9 -- 11, 2015. The gathering was to share information on the formation of the northern border, and what is being done to protect Indigenous burial and cultural places from destruction in Mexico. Anthropologists discussed what is happening on the northern border, in regards to the violence, and the need to protect the cultural places and burial places of Indigenous Peoples.
Also see: Dr. Juan Manuel Sandoval's interview from this seminar at Censored News:
http://bsnorrell.blogspot.com/2015/10/video-juan-sandoval-protecting.html
at October 15, 2015 No comments: