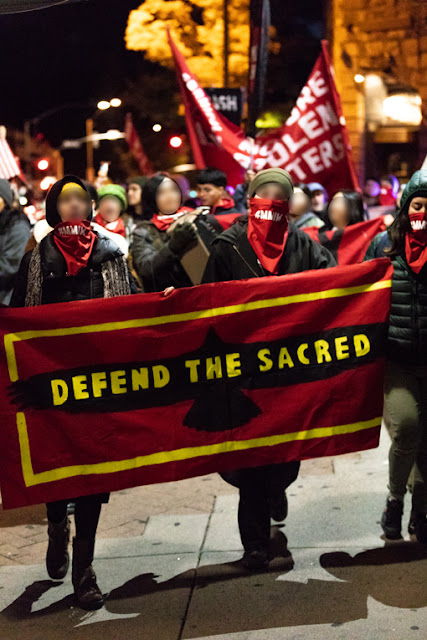 OCCUPIED FLAGSTAFF, Ariz. — Flagstaff police stalked and cited an Indigenous organizer in so-called Flagstaff, Arizona last night for their alleged role in a demonstration that took to the streets the previous month on what is now recognized as "Indigenous Peoples' Day."
The cops confronted the organizer at work and threatened that they were preparing to cite more people who may have been involved in the action based upon surveillance and a nearly month-long investigation.

According to a police report obtained this morning, at least 13 people, including Indigenous organizers and supporters, are facing misdemeanor charges of "Obstructing a Public Thoroughfare" for their alleged roles in the action. The report states that others have yet to be identified via social media and other forms of surveillance.

"We will not be silenced by what is clearly a political attack designed to deter further organizing for justice in our communities." stated Maile Hampton, who is facing charges. "On the day that city officials celebrated their empty declaration of 'Indigenous Peoples' Day' this demonstration called for justice for Missing and Murdered Indigenous Women, for an end to mass deportations and migrant detentions, for accountability of the city of Flagstaff for their hypocritical role in desecrating the Peaks, and to address the disproportionate level of arrests Native people face in this town. That I now face further state repression for standing for justice is not a surprise, it is the reality we face as we resist cultural genocide."

"I do not see it as a coincidence that these charges come on the eve of a planned protest against desecration of the Holy San Francisco Peaks this Friday." stated Klee Benally, who is also facing charges. "I will not be intimidated by state repression, I will continue to fight back and honor my ancestors and future generations through this process."

The rally specifically addressed the disproportionate number of Indigenous People threatened and targeted in Flagstaff.

According to the most recent census, Indigenous Peoples comprise 10% of the population but account for nearly half of all the annual arrests each year.

Organizers of the rally had previously called for these immediate actions:
* continued boycott of Arizona Snowbowl and for the City of Flagstaff to cancel their contract with the ski resort,
* end to racial profiling & I.C.E. collaboration and further work to abolish police in our communities by establishing community support networks and transformative/restorative justice options,
* repeal the anti-camping ordinance and all anti-homeless policies
* donations of sleeping bags and winter clothing for unsheltered relatives at Táala Hooghan Infoshop (1704 N 2nd St),

You can read more about the October 8, 2018 action here:
http://www.indigenousaction.org/land-defenders-take-streets-rejecting-empty-declaration-of-indigenous-peoples-day-in-flagstaff/

To support or contribute to legal defense please visit www.indigenousaction.org