After the World Youth and Student Gathering in Caracas in August 2005, on my first trip to Venezuela, it led to the heating oil to tribes and poor people in December 2005.
Shortly afterward, Caracas hosted the World Social Forum in January 2006. This would be my second trip to Caracas. I tried to get a delegation of indigenous people from the north continent to establish friendship and cultural exchanges and to share our struggles before the World Social Forum. After approaching indigenous organizations ( IITC, AIM, IEN, etc), tribes, all seemed focused on other things or with no resources and declined to join. But I was determined to make this gathering. My interest in the social system of the country under President Hugo Chavez was growing deeper. President Hugo Chavez had re-directed oil wealth from a few hands and pockets, to addressing the needs of the people. I had to see how it was being implemented.

Eventually, a delegation of 4 of us went down to Caracas. We had to struggle to find plane fares, etc. My long-time friend Peter Coyote, indigenous rights supporter and advocate for decades, came through and helped us with plane fare, along with other grassroots community members. The community passed the hats around and we were able to get to Caracas.
Sarah James, Gwich'in, Arctic Village Alaska, long-time activist to protect the Arctic National Wildlife Refuge (ANWR) from plans of oil exploration and drilling; Casey Camp-Horinek (Ponca)  long-time Native rights activist, environmentalist, and actress and Drumkeeper for the Ponca Pa-tha-ta, Woman’s Scalp Dance Society. Alex Louie, Okanagon from Spirit Lake in BC Canada, long-time cultural and sacred sites activist. 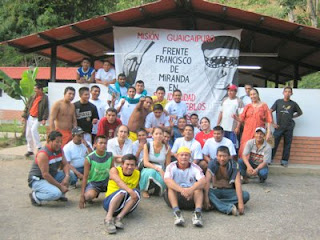 In Venezuela, the friendships made during the previous months working to implement the oil to tribes and poor people continued. The Venezuelan Consulate Martin Sanchez and Omar Sierra had called Caracas where we were greeted by the Minister of Indigenous Health, Dr. Noli Fernandez. She welcomed us with her staff in person dressed in a beautiful red traditional flowing dress of the Wayuu Tribe. We were housed in that complex and stayed with some of her staff, who ensured our needs were met.
One day, as I was walking outside the complex, I noticed an elder trying to carry a pot. I offered to help her. She invited me to take the food she was carrying to a place where her tribe was coming in from several hundred miles in buses to attend the Forum. Turns out she was the Clan mother and thought they might be hungry and had prepared some food. She introduced me to some 100 of her tribe. I invited her and her tribe to our presentation the next day.
She showed up the next day with about 300 Indians. We spent most of the hours there being officially received with song, dance and prayers and a meal.
We attended and presented our stories at the forum before hundreds of Indians and participants from around the world. After the forum we stayed another week and were shown the social programs funded from all the oil revenues called missions. A mission for housing, education, food, etc., we were taken to the barrios in the hill surrounding Caracas to see how health care was free with a medical clinic outpost every few blocks. Food warehouses sold food at wholesale and free food was cooked rotating at different homes then taken to the elderly and ill, new housing, etc.
But the mission that showed me how true the government was to recognize and address the needs of the tribes in Venezuela, was Mission Guaicaipuro! Named after the great warrior chief who fought off the European invaders until he was assassinated by the Spanish. This mission seeks to restore communal land titles and human rights to Venezuela's 33 indigenous tribes.
Located in the hills outside of Caracas in a beautiful forest with waterfalls was an encampment with a building that trained Indians from all the tribes in medical skills. Upon completion of the training, they returned to their communities and helped in health care delivery. We were received by the students who had also just met each other from different tribes and parts of the country. We laughed a lot, asked questions of each other and wound up being welcomed and asked to participate in their friendship dances.
Casey Camp opened a gathering of the World Social Forum event and shared the environmental devastation occurring in her lands in Oklahoma. Sarah James shared at numerous gatherings and meetings the struggles to keep her people's territories free of exploitation and to preserve their main food source, caribou. Sarah and Casey left after the World social forum back to the north.


A few days later, Dr. Noli Fernandez, Minister of Indigenous Health for the nation, mentioned she was headed to Amazonia province and asked if we would like to come and see the health system clinic in isolated jungles. Heck yah!! We flew by military cargo planes into Amazonia province and took a military gunboat up the Amazon, the Orinoco River, to isolated villages. We were once again well fed with all kinds of food, from monkey, ants, river potatoes. All was laden with sauces and other fruit and vegetables. The fish from the Amazon was caught fresh and cooked for us by the river with other foods. It was delicious.
While in the area, we met with LiLiborio Guarulla Garrido of the Baniwa tribe, the first Indigenous Governor of the province of Amazonia. He introduced us to the spiritual leaders of the area and exchanged gifts followed by a delicious meal once again.
We took a land route back to Caracas filled with indigenous trading markets along the way and river crossing by ferries way late into the pitch-black nights. We got to meet with the local communities and share stories of struggles and common spiritual beliefs and the universal indigenous relationship to our mother earth.
After a couple more days in Caracas, we returned home filled with renewed belief and hope that it is possible to care for a nation's peoples needs health, education housing, etc. and respectfully recognize the rights of indigenous peoples territories. An example for the rest of the global communities.
This is what President Chavez showed the world!