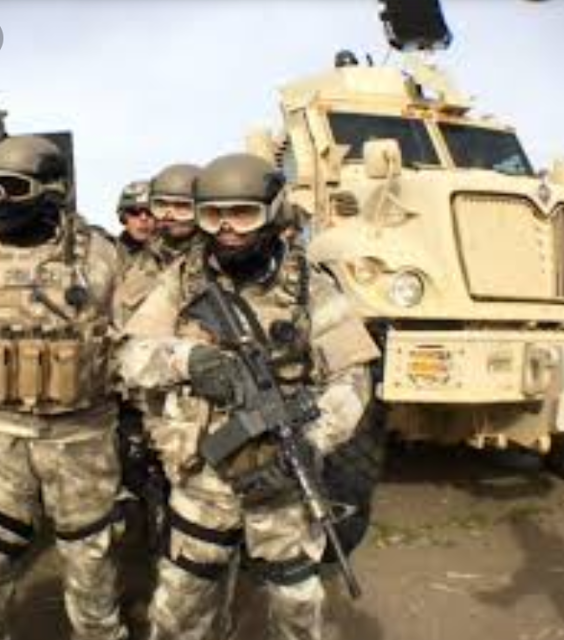 Newly-released e-mails confirm what Censored News exposed about the federal permits for the Dakota Access Pipeline.
Now the lawmakers, police and military responsible for the permits, attacks and abuse that resulted in critical injuries to many protecting the water -- want to hide.

-- Sinister Role of Two U.S. Presidents
The permitting process for Dakota Access pipeline began during the Obama administration, in the spring of 2014,  according to U.S. Dept of Energy records that Censored News discovered online and exposed.
That was just a few months before Obama visited Standing Rock in June of 2014.
Later in 2016, when Water Protectors were being shot with rubber bullets, fired on with tear gas, and imprisoned in dog cages with prisoner numbers written on their arms as was done by the Nazis -- Obama refused to halt the abuse.
Cheyenne River Lakota Chairman Harold Frazier urged Obama to halt the abuse, during a meeting in Los Angeles, but Obama refused to stop the abuse and refused to halt the pipeline construction. Instead, Obama went golfing and to a fundraiser dinner. Obama told a news reporter that he was waiting for things "to play out."
When Trump began his bizarre and crazed term, Trump endangered all forms of life and continued the sinister U.S. agenda in 2017, carrying out the genocidal policies of the U.S. government that places oil, profits, and payback to political donors, above human life and justice.
While Obama relied on public relations' spin to avoid detection, Trump didn't bother. Trump's agenda was, and is, destruction, agitation, distraction, confusion and abuse of the protectors.
-- New Exposures Send Abusers Begging to Hide --
The Intercept and Will Parrish are exposing new information. Freedom of Information requests reveal the big players which enabled Dakota Access Pipeline to continue the abuse.
The Intercept also exposed earlier Heath Harmon of Three Affiliated Tribes, the undercover FBI agent who set up Red Fawn for arrest and imprisonment.
Unicorn Riot, on the frontlines and arrested at Standing Rock, documented the abuse by the United States.
New e-mails show the power of Unicorn Riot videos and make it clear why the media was targeted with arrest at Standing Rock.
Revealing the power of identifying the perpetrators who remain protected by the United States government -- the links for Censored News have been censored and blocked by Twitter since 2016.
The links have been blocked ever since Censored News posted photos and names of the dog handlers, security guards, undercover agents and off-duty police officers who carried out the attack using vicious dogs to attack Standing Rock Water Protectors in September of 2016.
Now, North Dakota is on the run.
North Dakota wants to keep documents and truth secret and hidden from the public.
The Intercept exposes how North Dakota seeks to restrict public records access after Standing Rock:
https://theintercept.com/2019/02/11/north-dakota-public-records-pipeline-protest/

Further, a General has been exposed.
At Huffington Post, read how a General turned oil lobbyist pushed through permits for Dakota Access Pipeline:
https://m.huffpost.com/us/entry/us_5c619dfce4b0eec79b2668de?fbclid=IwAR2ZbbPF9gn3ffZ4tJyiLZ95j0Ks03ab7QaZ45mlowAmQybp6lOLkNF4vws

And further, a Louisiana Sheriff is now being ordered to turn over records.
Lake Charles Sheriff Greg Champagne in southern Louisiana knew his area would benefit from the end of Dakota Access pipeline, with the Bayou Bridge pipeline.
Champagne was also President of the National Sheriff's Association in 2016, which lobbied Congress for militarized weapons and vehicles, and brought in Sheriff's Departments from across the nation to attack Standing Rock Water Protectors in 2016. The facts were exposed by DeSmog Blog in 2016.
The court recently ordered the records be turned over:
.https://www.theadvocate.com/baton_rouge/news/crime_police/article_728d508c-0ac9-11e9-9088-2b20b15c9db9.amp.html

Trump, mainstream media, dancing in abyss
Freedom of Information requests, court documents, live videos and investigative journalists are now heralds of justice, as the United States government plummets and mainstream media joins Trump, dancing in the abyss at the end of puppet strings.
. U.S. sniper on a hill at Standing Rock
https://bsnorrell.blogspot.com/2017/04/sniper-on-hill-standing-rock-and.html?m=1

Brenda Norrell, journalist in Indian Country for 36 years, began Censored News in 2006, after being censored and terminated as a longtime staff reporter at Indian Country Today. Norrell began serving as a reporter at Navajo Times, during the 18 years she lived on the Navajo Nation, continuing as a stringer for AP and USA Today. Later, she traveled with the Zapatistas in Mexico and visited with Bolivian President Evo Morales in his mountain homeland. Today, she is blacklisted by mainstream media. 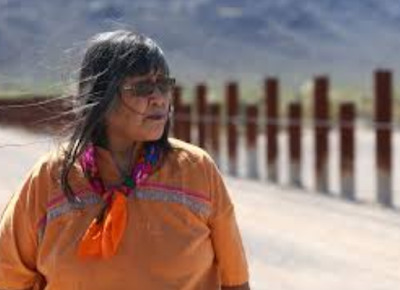 Ofelia Rivas, O'odham living on the Tohono O'odham Nation at the so-called US border, is seeking a sponsor for expenses to the Ward Valley Occupation Commemoration gathering this weekend.
Contact her at 4oodhamrights@gmail.com (Due to time, donations need to be sent to -- Ophelia Rivas, via Walmart Moneygram or Western Union, with an email to her. She needs $150  Thank you.)
The 21st victory celebration on Sat, Feb. 16, 2019, focuses  on the  halting of a radioactive dump in the Mojave Desert.
Ofelia Rivas is founder of O'odham Voice against the Wall, and exposed Israel's Elbit Systems now targeting her homeland with spy towers. She documents and battles the ongoing abuse of O'odham by US Border Patrol in her homeland.
Read more on her website:
.http://www.solidarity-project.org
. 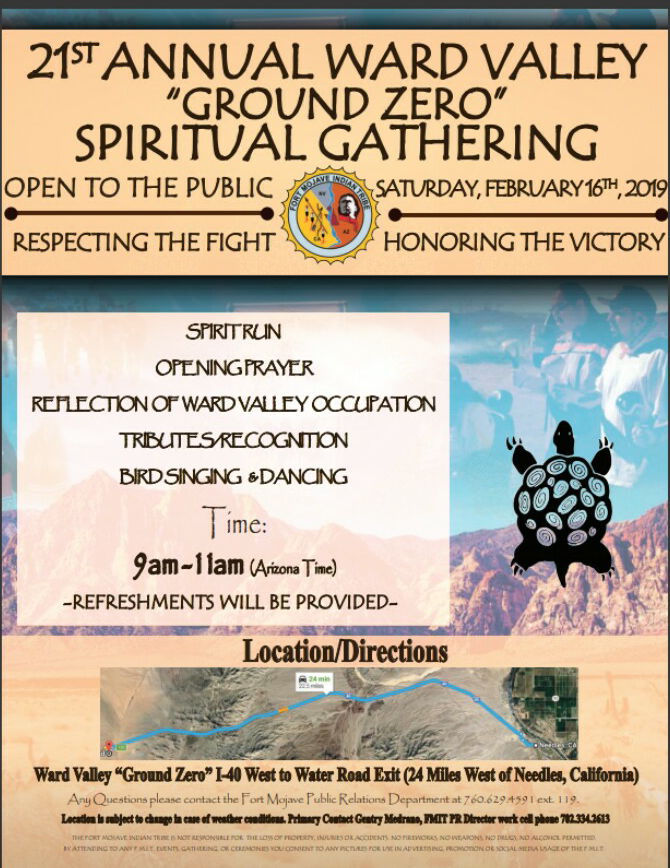 Note: To send donations by WalMart Moneygram or Western Union, you just need the name, Ophelia Rivas. Then e-mail her the reference number. Ophelia's e-mail is
4oodhamrights@gmail.com

Ofelia Rivas is an author and photographer at Censored News. Like everyone at Censored News, she is an unpaid volunteer. Neither Ofelia nor Censored News are part of any non-profit organizations.
at February 12, 2019 No comments: 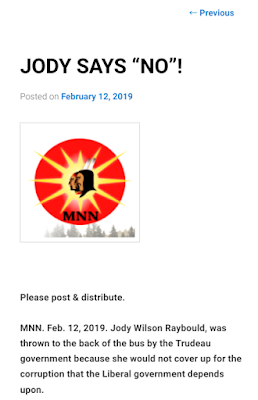 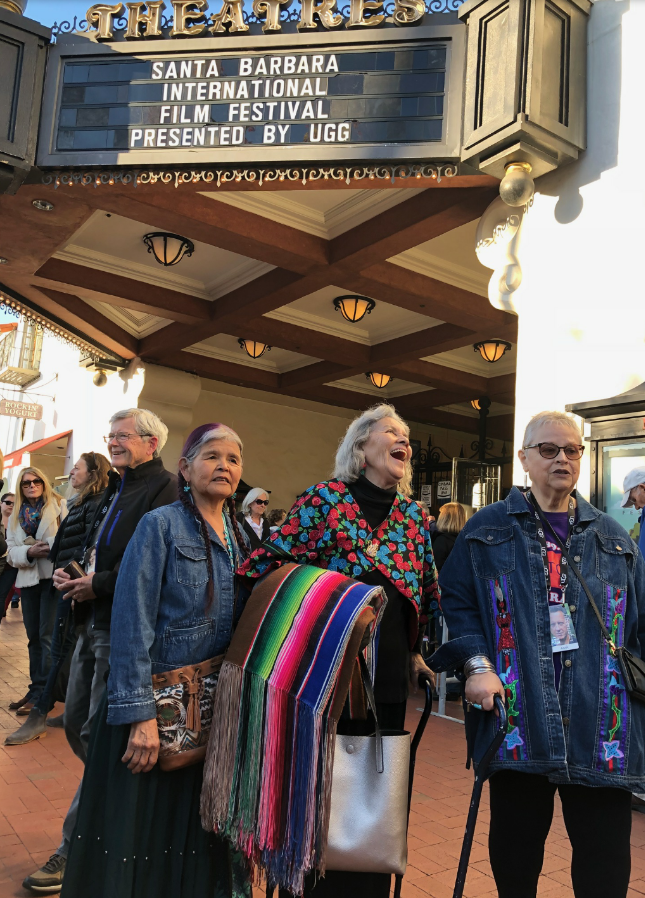 Jean Whitehorse, Yvonne Swan and Charon Asetoyer in front of the Metro Theater where Ama premiered in the United States at the Santa Barbara International Film Festival (top photo )

Lorna Tucker's shocking documentary Ama.
Excerpts from an article at 'Close Up Culture.'

It is framed by Jean Whitehorse, a delightful 67 year old Native American from New Mexico, whom Tucker slowly befriended and gently coaxed into appearing on film to tell how she was sterilised in the 1970s without her consent. A fate that befell tens of thousands of Native Americans as a result of the neo-european policies pursued by US governments in the 1960s and 1970s â€“ policies designed to kill off some of the Native American tribes. All rather harrowing, all repulsive and all utterly unforgiveable. A form of genocide for which the US government has never apologised.

For Jean, she went into hospital after an acute appendicitis attack. While undergoing surgery, she was given a tubal ligation (sterilised), leaving her to face a future without any more children (she already had a daughter). A devastating prospect given that she had grown up understanding that wealth was measured by the number of children you had, not by material possessions.

As Jean said in a moving post-film discussion after its world premiere at Curzon Soho (December 6): They [the US government] took from us our land, our children, our lifeline. Adding: been trying to get rid of us.

While tubal ligation without consent is a crime in its own right, what makes matters worse is that Jean's whole life has been blighted by discrimination. A Navajo Native American, she was sent off to boarding school at age five to fend for herself. A childhood lost where she was known only by a number not her name (which was actually the name of the nurse that delivered her).

At age 18, she was sent away again as part of the government's policy to dissipate the tribes in the hope they would fragment for good. In adulthood, post enforced sterilisation, it is no surprise that she took to alcohol to find some form of salvation.

The documentary broadens out to cover the widespread discrimination against Native Americans, arguments put forward forcefully by activist Charon Asetoyer (also present at the premiere screening).

There is archive footage from the Native American occupation of Alcatraz Island in 1969 (Jean returns to the island for the documentary ). There is also film of the harrowing journey the long walk that the Navajo endured in 1864 as they were forcibly relocated to Fort Sumner (an internment camp) in New Mexico, build the barracks (slave labour) and then left to live in mud huts before being resettled again.

Ama (Navajo word for mother) is a brilliant piece of investigative journalism by Tucker. The fact that the filming is a little suspect in places (a fact Tucker, making her first film after a career in photography, readily admitted to in the post-film discussion) is neither here nor there.

It is the revelatory heart of the beating heart belonging to the dynamo who is Jean Whitehorse that makes Ama essential viewing.

A petition requesting the Senate Committee on Indian Affairs in the United States to introduce a bill calling for a public apology on the issue of enforced sterilisation can be signed at: https://amamovie.com/
....
The film screened at the Wellcome Foundation in London (December 8, 2018), Lewes, East Sussex (December 13) and again at Curzon Soho (January 31).