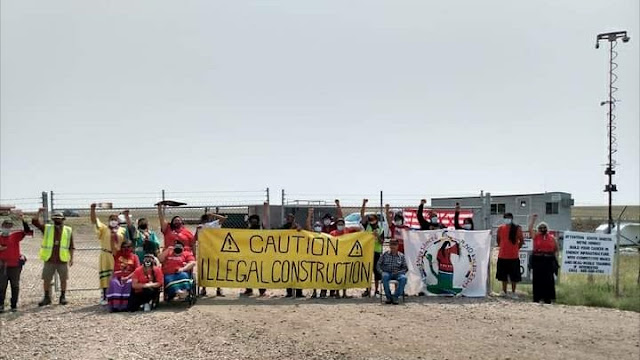 Pow Wow at the Pipeyard

BRIDGER, SD – Members of the Cheyenne River Grassroots Collective (CRGC), 2KC Media, and other grassroots individuals organized an event called “Powwow at the Pipeyard” at a Keystone XL pipeyard on Monday. The event was designed to bring awareness to the terrifying number of lives lost in direct relation to extraction industries.


“We look at our relatives on the Ft. Berthold reservation and hear how their violent crime rates have risen well over 300% since the big bakken oil boom in 2010,” said Tasina Smith, Co-founder of CRGC. “Such crimes range from rape, sexual assault, and murder. We have no other choice but to get as loud as we can about these crimes against humanity so that we may protect our people.”

TC Energy (formerly TransCanada), is the company who plans to construct the KXL pipeline. The pipe yard is just 7 miles from the Cheyenne River Sioux Tribe’s border and the proposed route goes under the river in which the tribe is named after, the Cheyenne River. There is history in this specific area according to Co-founder of CRGC, Joseph White Eyes.

“We have an inherent right under natural law to protect the land and water. Our ancestors retreated to this region after the massacre at Wounded Knee in 1890” Joseph continued, “The land that TC Energy plans to desecrate is all stolen land under the 1851 & 1868 treaties with the United States – so if anyone is breaking the law, it is this government and corporations like TC Energy.”

The event began with a light breakfast that included egg and sausage burritos with fruit, yogurt and drinks. Hand sanitizers and masks were provided to adhere to CDC recommendations due to the current COVID-19 pandemic. A drum group was present to sing for over a couple dozen people who danced for those that journeyed on. CRGC offered burning sage for medicinal purposes and information about the danger that comes with pipeline infrastructure.

The Cheyenne River Grassroots Collective is made up of a handful of individuals who wish to empower, educate, train and protect indigenous people to become the next leaders of their generation. The collective was formed earlier this year as a seed to a shared dream that CRGC members wish to see in their communities.

“We are a small group of talented, outspoken artists and activists. There is no limit to what we all bring to the table when fighting for social or environmental justice,” Smith stated. “This is only the beginning to a shining future for our nation.”

Intertribal rounds were conducted from 9am until about noon MST. After the powwow, members of CRGC and 2KC Media provided turkey wraps, chips and drinks.

“We want to show our people what exactly is happening during the pandemic and the continued building of KXL despite that pandemic. These projects are direct threat to our tribal members. What better way to do so than to gather our community with song and dance,” said White Eyes, “People have a right to know that an illegal operation in underway on indigenous land yet again. This time, we are more than ready to stand peacefully for what is rightfully ours.”

With proper respect to all tribes of the Sioux nation I am not surprised that the Lakota faction were the ones who never stopped righting for their stolen land and broken treaties. All peoples should come together regardless of race , color or creed