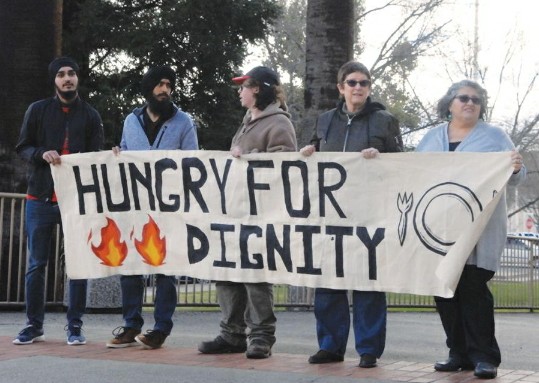 CALIFORNIA — Despite worsening air quality due to regional fires, detained undocumented immigrants at the Yuba County Jail began an indefinite hunger strike this Wednesday morning in response to deplorable conditions at the facility.


From arbitrary restrictions to yard time implemented by Captain Allan Garza, to the mixing of populations of immigrant detainees with recently detained criminalized individuals—a practice that ignores COVID-19 distancing restrictions and common sense practice—the fires ravishing Northern California are the least of concerns for immigrants detained at the jail 30 minutes away from the Nevada City fire.

"We're already hearing from hunger strike leaders that Captain Garza has begun to retaliate against them by taking hygienic products and even beverages from them. This is a violation to the 4.2 Hunger Strike National Detention Standards, in which 'staff are required to provide an adequate amount of water or other liquids'" urges Itzel Calvo, deportation defense organizer with the California Immigrant Youth Justice Alliance.

"Folks have been organizing inside detention centers across California for five months now, and no significant change is being enacted by state or locally elected leaders. The folks inside felt escalation was needed, even though the air quality poses extra health risks."

That's why the hunger strike at Yuba County Jail will go on indefinitely, or until folks detained inside get a meeting with Captain Garza to further discuss COVID-19 precautionary measures.

Simultaneously, individuals held at the Mesa Verde Detention Facility in Bakersfield are demanding an end to similar practices ignoring isolation measures as ICE finally confirms that there is a coronavirus outbreak inside the facility, with more than half of the detainees held at the facility testing positive for the disease.

Despite this extremely alarming and damning statistic, ICE and GEO Group are doing nothing to stop the spread, and are instead exacerbating conditions to spread the disease, like limiting cleaning efforts and mixing populations of infected folks with those who are not infected.

NOTE: Two rallies in support of the strikers are being organized by community advocates in Yuba County and Kern County, where Mesa Verde Detention Facility sits. Rallies are set to commence Friday, August 21 from 7pm-10pm outside of each facility.