'Warrior Women' 'Whatever it takes -- We get the job done.'  -- Madonna Thunder Hawk, Lakota
'Warrior Women' free film screening and meet the matriarchs on March 25 and 28, 2021:
Register at: https://bsnorrell.blogspot.com/2021/03/warrior-women-discussion-and-free-film.html
'Warrior Women' Madonna Thunder Hawk narrates from Survival School to Wounded Knee and Standing Rock: Watch film March 7 -- 10, 2021
By Brenda Norrell
Censored News
Warrior Women' -- Madonna Thunder Hawk narrates this journey, from the freedom of picking wild onions on her Cheyenne River homeland before the dams flooded the land, to the community building of the Survival School and Alcatraz.
With archival film footage and voices of the resistance, the film documents the rise of the American Indian Movement, and the Occupation of Wounded Knee.
Thunder Hawk tells the story, of the racism in South Dakota: The assaults on young girls, and genocide of stolen children imprisoned in boarding schools.
Thunder Hawk describes how the movement defended the land and water, from chasing away Union Carbide and its uranium mining plans, to the fight for the water at Standing Rock.
Surviving the mandate of the U.S. to eradicate her generation, the film reveals the women who were the backbone of the Revolution.
Watch for more upcoming screenings. 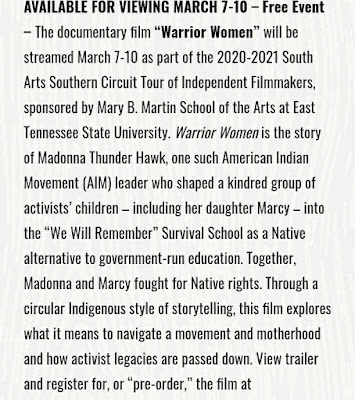