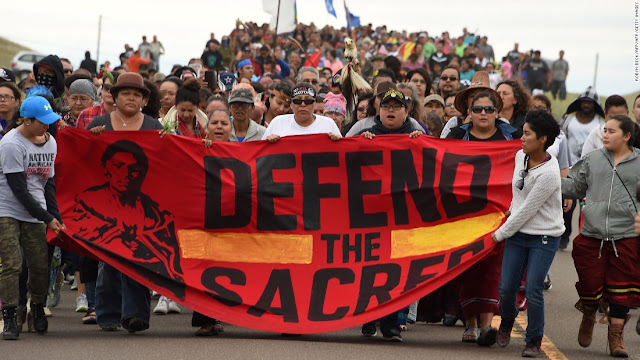 By Brenda Norrell
Censored News
In a twist of events, Energy Transfer Partners sued TigerSwan after TigerSwan released confidential documents to the North Dakota regulatory board.

TigerSwan, contracted mercenaries in warzones, was under probe for operating without a license in North Dakota when it spied on Standing Rock Water Protectors.

The Dakota Access Pipeline wants these documents sealed up, destroyed, and kept from the public.


The Intercept published some of these documents in November. There's plenty more of the 16,000 documents that the pipeline doesn't want you to see.
The Intercept exposed infiltrators working with TigerSwan, and the fact that a helicopter was used to photograph Water Protectors from overhead. It exposed that radio communications were intercepted and manipulated.
https://theintercept.com/2020/11/15/standing-rock-tigerswan-infiltrator-documents/
Besides the exposures about TigerSwan, The Intercept exposed Heath Harmon of Three Affiliated Tribes in North Dakota. Harmon was a paid FBI informant that set up Red Fawn for arrest and imprisonment. Harmon was recruited as an FBI informant by his brother, a Standing Rock BIA police officer.

As the demands for President Biden, and the courts, to shut down the Dakota Access Pipeline continue, Energy Transfer Partners has launched legal attacks to hide the surveillance and interference at Standing Rock. It is clear that the legal attacks are meant to silence, intimidate and suppress.
Read more:

"The company that built the Dakota Access Pipeline is suing for the return of 16,000 documents held by the state of North Dakota, saying the information is private and that any disclosure presents a security risk to the line," the Bismarck Tribune reported.

"Energy Transfer and its subsidiary Dakota Access LLC are suing both the North Dakota Private Investigative and Security Board and TigerSwan, the North Carolina-based company that handled security for the pipeline while it was being built."
https://www.willistonherald.com/news/state/dakota-access-pipeline-developer-sues-state-over-thousands-of-unreturned-documents/article_6bf2f4a6-22ce-11eb-86c3-4b0bd1d916ae.html
at March 17, 2021