In Nevada, Secrets Explode: The Legacies of Julian Assange and Myron Dewey 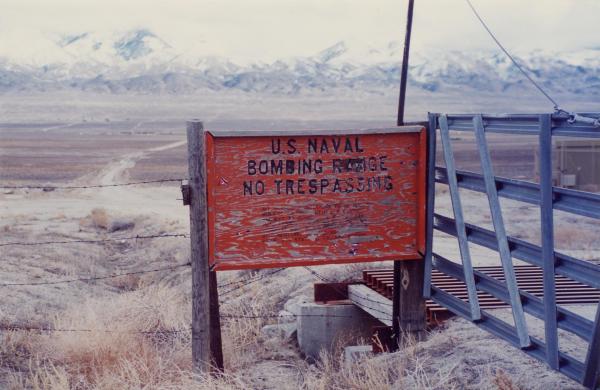 By Brenda Norrell
Censored News
French translation by Christine Prat
It is here in the Nevada desert where the United States wants to bury its secrets. Its secrets explode here, leaving a trail of death for Shoshone in their homeland at the Nuclear Test Site.
The Nevada desert is where the legacies of Wikileaks Julian Assange, and Paiute Shoshone Myron Dewey, intersect.
It is at Creech Airforce Base where drone military whistleblowers described the faulty intelligence and reckless assassinations by drone pilots carrying out computer surveillance around the world, and the missiles that kill the targets of the U.S. government. The women and children who are killed are ignored. At least one U.S. citizen has been assassinated this way.
Myron Dewey, like Wikileaks, exposed the truths that no one else would. At Standing Rock, Myron photographed police, TigerSwan, and other security operators of the Dakota Access Pipeline. Myron captured their spy cell towers with his drone video. His drone was overhead when Water Protectors were attacked with water cannons and projectiles on Nov. 20, 2016, at Standing Rock.
On the day before he was killed in September, Myron live-streamed from the Fallon bombing range in his homeland of central Nevada. Myron warned of the Navy Seals bombing operations and the plan to expand the range. He also warned of the lithium mining planned for the Paiute Massacre Site at Thacker Pass in northern Nevada.
At the same time that it was exposed that the U.S. had discussed assassinating Julian Assange, Myron Dewey was killed when a truck pulled into his lane and hit him head-on on an isolated dirt road near his family home in Yomba, Nevada, east of Reno.
Assange and Dewey opened the windows to worlds that the United States wanted not just shut, but to be sealed and to disappear into silence.
Dewey documented the evidence of the critical injuries sustained by Water Protectors at Standing Rock in North Dakota: A young woman's arm was blown apart by a law enforcement projectile, two Native Water Protectors were shot in their eyes as peaceful Water Protectors were shot with tear gas, rubber bullets, and projectiles. Others were attacked by the dogs of security operatives.
Myron's evidence shows the local and national sheriff's deputies, local and state police, and National Guard who are responsible. Myron photographed the pipeline's hired spies who were stalking, including TigerSwan, mercenaries hired by the pipeline who operated in North Dakota without a license. Myron photographed their faces and vehicles.
In Nevada, the death trail begins with the massacres of Native people in their ancestral homelands. The death map continues with the atomic bomb testing and the spray of radiation, and resulting cancer, in the Shoshone homelands.
The death trail continues now with the flick on a computer at Creech Airforce Base. With faulty data and reckless carelessness, there is an assassination on the other side of the world.
The spread of death continues with the lithium mining of false green solutions and the vast amounts of water that will be used. The toxins of mining destroy life the natural world as the earth is carved out.
Then there is the bombing, in the Navy Seals bombing range in Myron's homeland, the homeland of Wovoka. The bombing range is death to the natural world and is preparation for deaths beyond the Nevada desert.
Article copyright Brenda Norrell, Censored News, content may not be used for any purpose without written permission. Photos are the property of the photographer or their estate.
at February 14, 2022 No comments:

They also stalked and spied on journalists like Myron Dewey, killed in September when a driver pulled into his lane and hit Myron in a fatal head-on collision. The other driver, John Walsh of Reno, survived and was found at fault, but charges have not yet been filed.

Now a temporary North Dakota Supreme Court order has put the brakes on the release of thousands of TigerSwan spy documents, which a state judge said earlier are public records and were scheduled for release.

"The temporary Supreme Court order means that the 62,000 pages of documents deemed by the judge late last year to be public will remain off-limits for now to anyone, including several news organizations that have requested them," Bismarck Tribune reports
.
Read more »
at February 14, 2022 No comments: