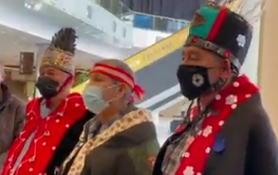 Wet’suwet’en Hereditary Chiefs and climate finance experts asked the RBC Board and management about their role in violating Indigenous rights by bankrolling projects that perpetuate genocide against Indigenous Peoples, such as the Coastal GasLink pipeline, as well as the role of RBC’s fossil fuel financing contributing to the climate crisis. Melina Laboucan-Massimo, the co-founder of Indigenous Climate Action, spoke to shareholders about how RBC’s financing of the tar sands has detrimental impacts to her homelands, the health of Indigenous people on their territory and to the climate.