MNN. May 18, 2022. The indigenous refuse to speak the bastardized language of Quebecois known as  French ‘canadien’. All indigenous languages based on the natural world are true since time immemorial because nature has not changed. Quebecois are trying to force the foreign language of French on the original people of Quebec, a colony on onowarekeh turtle island. Basic natural human right is for everyone to have their own natural identity based on language, culture, religion, beliefs, their natural way of life and sovereignty. Equality means being sovereign on their own land where creation originally placed them. 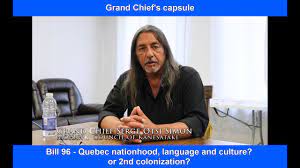 Forcing a foreign language upon indigenous people is a violation of indigenous ways.