Muscogee in the News -- Death of a forest defender, museums harboring remains and media censorship 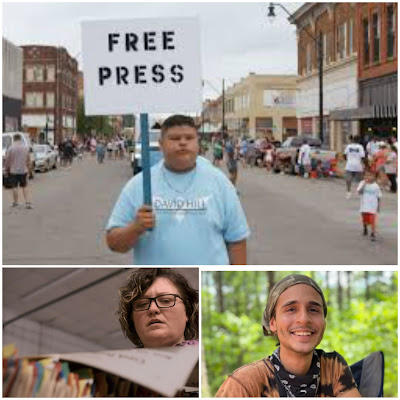 Muscogee in the News -- Death of a forest defender, museums harboring remains and media censorship

There are three news articles today about the Muscogee which together are a powerful statement, a force. Manuel Esteban Paez Terán, forest defender was shot and killed by police in his tent in Atlanta, Georgia, on the ancestral land of Muscogee.

Meanwhile, following the release of new data by ProPublica, it is revealed that museums, universities, and U.S. buildings are harboring the remains of Muscogee throughout the Southeast. There are thousands of of remains of Muscogee and other Native people at the University of Alabama.

And, the film "Bad Press" premiered at Sundance, which documents the censorship of the media by the Muscogee Creek tribal government in Oklahoma. Nationwide, the systematic censorship and oppression by tribal governments, modeled after the United States government, results in displacement, tribal government corruption, violations of human rights, mining, and ongoing suffering from the need for water, food, and heat, regardless of the revenues available.

Together these three news articles today signal the state of the nation of the United States, as it is, and as it has been. 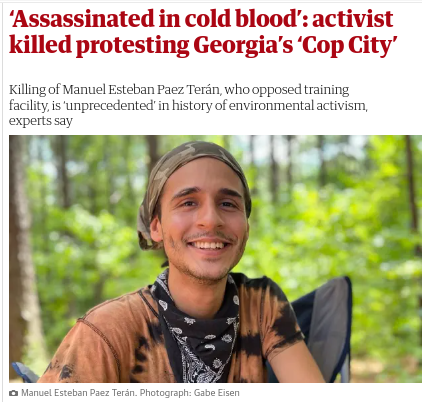 The headline of The Guardian in the U.K. is "Assassinated in Cold Blood: Activist killed protesting Georgia's Cop City."

Activists have been protesting the giant cop training center planned for a forested area since late 2021. The forest is a tree canopy and buffer against global warming.

Camped at the site, 'Tortuguita,' who had honored Muscogee as guardians and ancestors of this land in his previous interviews, was shot in his tent on Wednesday morning and police are providing few details.

The Guardian points out that the editorials lambasting the activists began in the Atlanta Journal-Constitution, and failed to mention that Alex Taylor, CEO of the paper’s owner, Cox Enterprises, was also raising funds on behalf of the Atlanta police foundation.

"Police raids on the forest intensified until 14 December, when a half-dozen 'forest defenders' were arrested and charged with 'domestic terrorism' under state law – another unprecedented development in US environmental activism, said Lauren Regan, founder of the Civil Liberties Defense Center ..."
Read the article https://www.theguardian.com/us-news/2023/jan/21/protester-killed-georgia-cop-city-police-shooting
Muscogee remains taken from these places

There are thousands of human remains of Muscogee in museums, universities, and U.S. government building in the Southeast, a new database by ProPublica reveals.

In October 2021, leaders from the Choctaw Nation of Oklahoma, Chickasaw Nation, Muscogee (Creek) Nation, Seminole Nation of Oklahoma, and Seminole Tribe of Florida brought the issue to the federal NAGPRA Review Committee, which can recommend a finding of cultural affiliation that is not legally binding. (Disputes over these findings are relatively rare.) The tribal leaders submitted a 117-page document detailing how Muskogean-speaking tribes are related and how their shared history can be traced back to the Moundville area long before the arrival of Europeans.

“Our elders tell us that the Muskogean-speaking tribes are related to each other. We have a shared history of colonization and a shared history of rebuilding from it,” Ian Thompson, a tribal historic preservation officer with the Choctaw Nation, told the NAGPRA review committee in 2021.

The tribes eventually forced the largest repatriation in NAGPRA’s history. Last year, the university agreed to return the remains of 10,245 ancestors.

In a statement, a University of Alabama Museums spokesperson said, “To honor and preserve historical and cultural heritage, the proper care of artifacts and ancestral remains of Muskogean-speaking peoples has been and will continue to be imperative to UA.” The university declined to comment further “out of respect for the tribes,” but added that “we look forward to continuing our productive work” with them.

The University of Alabama Museums still holds the remains of more than 2,900 Native Americans.

Landsberry-Baked worded for the Muscogee Nation News and personally experienced censorship and the firing of her entire staff after a change in tribal administrations.

"Eventually I hired Angel Ellis as my editorial assistant. She is exactly who you see in the film—an unbridled, devoted talent who was willing to push the envelope on what tribal media coverage could be."

Read the story in Filmmaker Magazine