Children were murdered at Blue Quills Residential School in eastern Alberta, by the Catholic staff pushing them down stairs and feeding them poisonous raw milk, contaminated with bovine tuberculosis.
Leah Redcrow said, "I myself didn't know that my grandfather had 10 siblings die in this school."
Today the search for the unmarked graves of children murdered at Blue Quills school continues.

The Pope admitted that the Catholic Church committed the crime of genocide.

"Yes, it's genocide," the Pope told Brittany Hobson of Canadian Press on the plane leaving Canada on July 30 after he viewed residential schools. The words are published in The Vatican news.
On August 23, the Pope told all Catholic institutions to transfer all financial assets to the Vatican Bank, also reported in its own Vatican News.
After the genocide of Indigenous Peoples globally, and specifically the widespread murder of Native children, the Catholic Church obviously knew it would be sued.

"The investigation's theory regarding the missing children of the Saddle Lake site, is that they are buried in undocumented mass graves," the report states.

The report includes allegations that a "disciplinarian" who worked there from 1935 to 1942 was seen killing children.

"The investigation has received disclosures from inter-generational survivors, whose parents witnessed homicides at the Saint Paul site," the report states.

That staff member is accused of pushing boys down the stairs, killing them.

"[He] would then threaten to kill the boys that witnessed if they said anything," it says.

The report states the accused died in 1968.

Leah Redcrow, executive director of AOS, also believes that many of the children at the school died after they were forced to drink unpasteurized milk that was contaminated with bovine tuberculosis.

"A lot of what this is, is getting spiritual justice for our family members who are missing. I myself didn't know that my grandfather had 10 siblings die in this school."

SASKATCHEWAN -- An indigenous nation in Canada said it has discovered evidence of possible unmarked graves on the grounds of a former residential school.

Star Blanket Cree Nation said a ground-penetrating radar had revealed the jawbone fragment of a small child and more than 2,000 "areas of interest".

Those are not yet confirmed to be evidence of human remains.

But the fragment "is physical proof of an unmarked grave", project lead Sheldon Poitras said on Thursday.

The discovery from the Star Blanket Cree Nation in Saskatchewan follows a wave of investigations into possible unmarked graves at the sites of former residential schools in Canada. Ground searches starting in the spring of 2021 have uncovered evidence of more than 1,100 such graves across the country.

"It is also clear that many of the children and infant babies born at the mission as a product of child sexual assault were disposed of through incineration on and off-site at the mission." 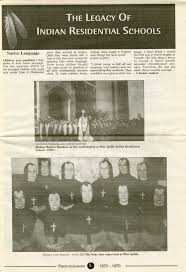